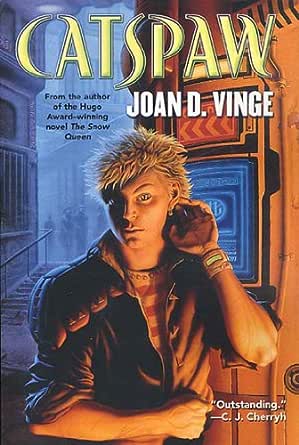 You've subscribed to Cat! We will preorder your items within 24 hours of when they become available. When new books are released, we'll charge your default payment method for the lowest price available during the pre-order period.
Update your device or payment method, cancel individual pre-orders or your subscription at
Your Memberships & Subscriptions 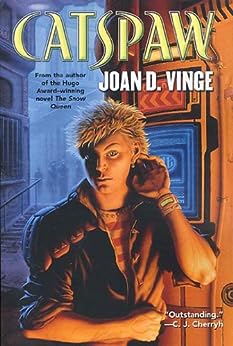 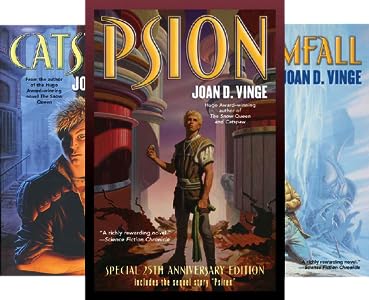 Joan D. Vinge has won two Hugo Awards, one for her novel The Snow Queen. Author of ten novels and a number of film adaptations, her books have been bestsellers here and abroad. She lives in Madison, Wisconsin.

When murder attempts are made on a corporate dynasty of old Earth, the wealthy taMings send offplanet for help. Their shanghaied bodyguard is Cat, a half-human, half-alien telepath whose psychic powers were blocked when he used them to kill in self-defense. Given a temporary cure so that he can protect idealistic Assembly member Lady Elnear taMing, Cat discovers secrets that endanger his own life. The stuff of yesterday's headlines, these include revelations that scion Daric taMing is a drug dealer and holier-than-thou evangelist Sojourner Stryger a closet sadist. Vinge again displays her talent for weaving a complex web of relationshipspersonal, political and socialbut the mass of detail slows this romantic melodrama to a crawl rather than giving life to its bland characters.
Copyright 1988 Reed Business Information, Inc. --This text refers to the paperback edition.

Hired by the powerful taMing dynasty to protect its Security Council candidate from assassination, a half- human telepath known as "Cat" uncovers a larger conspiracy that threatens to destroy the remnants of individual freedom in a world controlled by interstellar corporations. Political intrigue, shifting loyalties, and fully realized characters add uncommon depth to this sequel to Psion . Highly recommended for sf collections as well as for mature young adult readers. JC
Copyright 1988 Reed Business Information, Inc. --This text refers to the paperback edition.

“First-rate suspense! One of the top science fiction books of the year.” ―Seattle Times/Post-Intelligencer

4.6 out of 5 stars
4.6 out of 5
62 customer ratings
How does Amazon calculate star ratings?
Amazon calculates a product’s star ratings based on a machine learned model instead of a raw data average. The model takes into account factors including the age of a rating, whether the ratings are from verified purchasers, and factors that establish reviewer trustworthiness.
Top reviews

Adrean
5.0 out of 5 stars Love!
Reviewed in the United States on March 26, 2015
Verified Purchase
I think Cat, the main character was my first fictional love. Sure, I had crushes on other characters, but Cat was such a complex character. He felt alive and real. There are so many main characters that do everything right and, if they don't, it's for drama or because the plot needed them to mess up. But Cat is kind of a screw-up. And Vinge allows him to be that. He gets things wrong, he gets embarrassed about, and the plot veers off its path to follow him.

And Cat isn't the only one. All of the characters feel real. Even the bad guys get to be human beings with feelings and wants. No one is cackling in the dark, happy about all of the bad things they're about to do. That's makes them even more terrifying.

Now, part of that is because Vinge is incredibly good at exploiting the character gimmick. Cat is a telepath, so we occasionally get to into the minds of those around him. It's easy to see the humanity in someone when know what they're thinking and why.

I love the plot. This is where I would maybe try to explain it, but you can go click on that link and read the description yourself. Besides, I'm not sure I could really do it. It's... man, it's big and vast and has some really cool stuff. The good parts are also the bad, though. It's so big that I sometimes wonder if I really know what's going on. But then I think maybe it doesn't matter. I like the way I've interpreted things and I love the conversations it's started with other people that read it.

The book is long. Depending on how you feel about that, this is good or bad. I don't tend to want to get into really long things, especially these days, but I liked everything so much that I didn't care.

And, something I didn't realize until after reading it, it is actually the second in a series. However, I never once felt lost. I've given it to other people and they've also said that it stands on its own just fine. But, if you like it, I definitely do recommend getting Psion (the first one) and Dreamfall (the third).

shaggy66
5.0 out of 5 stars A sci fi must read.
Reviewed in the United States on April 17, 2018
Verified Purchase
Read this in 94 and always poped into my mind from time to time .So glad to have found it again.Fantastic and a main character i grew to love by midstory.
Read more
One person found this helpful
Helpful
Comment Report abuse

Lori
5.0 out of 5 stars Great follow-up
Reviewed in the United States on October 8, 2013
Verified Purchase
I learned to love Sci-Fi reading "Psion" and never knew this follow-up existed, so when I discovered it, I really had to try it. I found it as good as the first. The character of Cat remained true to his initial self, but developed and grew. I love the world Joan D. Vinge has created. It was fun to see Micah back and to learn much more about Jule's family and why she is the way she is. Wonderful read. A little slower than the original but a totally unique story built around a character I really like.
Read more
Helpful
Comment Report abuse

Lourdes
3.0 out of 5 stars Interesting
Reviewed in the United States on March 3, 2013
Verified Purchase
I bought this for my 13 year old son who is a book worm. It was a surprise buy. He finished reading it in 2 nights. This book is part of a series but even though he enjoyed it, he didn't ask me to get the next book. He always finishes series books but I was a bit disappointed that he didn't want the other books by this author. I thought it was interesting, but apparently it didn't appeal to him as much. It was a good book but it didn't capture his interests as much.
Read more
Helpful
Comment Report abuse

Jon B.
5.0 out of 5 stars CAN'T DO BETTER
Reviewed in the United States on January 30, 2014
Verified Purchase
As I wrote in my review of Psion, I have read and reread Joan D. Vinge's tale of the trials, tribulations and courage of Cat until my paperbacks are in an alarming shape. Her tales are vivid, sometimes painful, but always entertaining. I cannot recommend her writing and imagery enough. A must-have for every PSI-fi fan! Thanks for making them "take along" wherever I travel.
Jon B
Read more
One person found this helpful
Helpful
Comment Report abuse

kadugen
5.0 out of 5 stars awesome book!
Reviewed in the United States on April 8, 2011
Verified Purchase
I was really surprised by this book. Honestly, the cover is pretty dorky looking - like a cheap fantasy book. I don't remember how I came across this book originally, but the description sounded promising, so I bought it. Amazing! It's a genuinely unique book and I found myself unable to predict the plot. The writing is fantastic, the characters seemed real, and the emotions were strong. Thanks Joan Vinge!
Read more
Helpful
Comment Report abuse

Gabriel Abinante
5.0 out of 5 stars Definitely in the top 5 cyberpunk novels of all time
Reviewed in the United States on March 23, 2019
Verified Purchase
Excellent book. Right up there with Snow Crash, Do Androids Dream of Electric Sheep, and Neuromancer.
Read more
Helpful
Comment Report abuse

James K. Colozzi
4.0 out of 5 stars Great story
Reviewed in the United States on May 6, 2018
Verified Purchase
I remember reading this as a teen when it came out and I fell in love with this beat down slum kid who had more grit than a bag of concrete! A great read.
Read more
Helpful
Comment Report abuse
See all reviews from the United States

Jess H. Brewer
4.0 out of 5 stars Another gem!
Reviewed in Canada on November 30, 2014
Verified Purchase
Again, how did I miss this for so long? There must be some truth to the claim that publishers suppress women authors.
Read more
Helpful
Sending feedback...
Thank you for your feedback.
Sorry, we failed to record your vote. Please try again
Report abuse