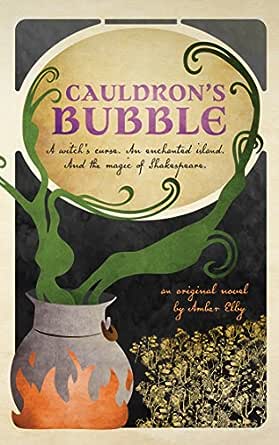 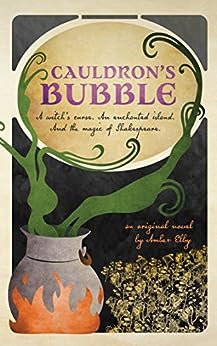 Cauldron’s Bubble is a magical time-travel tale which uses stories and characters from Shakespeare to tell a new, fast-paced, coming-of-age story.

“Alda could flee, perhaps, and save herself. Or she could fight . . .”

Newly orphaned Alda is struggling to accept the death of her grandmother when she is called to a magical quest in a world inspired by Shakespeare. A magical cauldron’s bubble transports her on a journey through time and space to an enchanted island, where she discovers her strength and courage. Along the way, Alda meets a colorful cast of characters, including witches, sorcerers, pirates, and a harpy.

Cauldron’s Bubble is an enchanting new tale that crosses genres to mix fantasy and Shakespeare. It breathes new life into the world of Shakespeare, and is an engaging way to introduce The Bard to readers.

Anne Swan
5.0 out of 5 stars Colors and questions
Reviewed in the United States on September 7, 2017
Verified Purchase
A tangle of memories, colors, fears and mystery compel Alda to continue on her path. Gramma left a curious gift for Alda that opens new worlds of danger and wonder. Cauldron's Bubble is full of questions and magic that compel the reader to accompany Alda on her journey. I can't wait for her next adventure.
Read more
2 people found this helpful
Helpful
Comment Report abuse

Jen
5.0 out of 5 stars A Must Read!
Reviewed in the United States on November 5, 2017
Verified Purchase
I thoroughly enjoyed Cauldon's Bubble. The references to Shakespeare's works were fun to catch, and the story line kept me entranced. I couldn't put it down and read it in 2 days. The characters were engaging as well. I cannot recommend enough.
Read more
One person found this helpful
Helpful
Comment Report abuse

Westie Shenanigans
5.0 out of 5 stars Five Stars
Reviewed in the United States on June 20, 2018
Verified Purchase
Loved the book. Has you hooked right away! Very fast read...because it’s hard to put it down!
Read more
One person found this helpful
Helpful
Comment Report abuse

Suze Lavender
5.0 out of 5 stars Spellbinding
Reviewed in the United States on February 23, 2018
Alda's grandmother leaves her something curious, a cauldron's bubble. This artefact gives Alda the chance to travel through time and takes her to different realms. On her travels Alda keeps meeting a boy named Dreng. She first stumbles upon him on a ship when he's still quite young and thinks she'll never see him again. She has no idea who he is, but somehow their fates keep being merged.

Alda has to deal with evil witches, spells and old and new conflicts. She never knows where she'll end up and how she'll survive when she's there. Will she be able to navigate the strange and dangerous world she's now a part of? Alda has a lot to learn and she will make mistakes. How can she rescue herself and others if she doesn't know what she's capable of yet. Will she be able to find out who she is and what she can do?

Amber Elby skillfully combines the characters from Shakespeare's plays with a story about time traveling. I absolutely loved that combination. Alda runs into several different Shakespearian characters and I loved the role they play in the story. There are pirates, evil hags, dryads, bespelled women and much more. Every character is interesting and has something fascinating to contribute to the story, which captivated me from beginning to end.

The Shakespeare element of Cauldron's Bubble is amazing. I love Amber Elby's knowledge of his world and his characters. She takes their personalities and transforms them into something different, but she's keeping them authentic in a beautiful skillful way. That makes her story incredibly special. I loved being taken on a journey to different times and places, while still having a familiar element to hold on to. That combination really works. I highly recommend Cauldron's Bubble, it's entertaining, spellbinding and very well written.
Read more
One person found this helpful
Helpful
Comment Report abuse

Valerie Fulton
5.0 out of 5 stars A New Dimension for Shakespeare (Your Kids Will Love It, Too)
Reviewed in the United States on November 25, 2017
In some ways, my favorite part of this innovative YA novel was the author's introduction, which invites her readers to consider that the stories Shakespeare wrote were fluid, breaking down the fourth wall between audience and story. Like "Rosencrantz and Guildenstern Are Dead," which features minor characters from the play "Hamlet" in the leading roles, this book ventures outside the plot of Shakespeare into a magical realm that links all his plays together.

That said, the book itself is greatly entertaining. Following the death of her beloved grandmother, Alda finds a magical totem (the "cauldron's bubble") hidden in the old woman's cloak and is instantly transported from her home in late nineteenth-century Grand Ledge, Michigan to a merchant vessel, Macbeth's three witches on the heath, the desert Southwest, and an unmapped realm of voices and symbols, a spirit world called Netherfeld. The witches send Alba on a quest to free a mythical creature from an enchanted island, and there Alba discovers a mortal enemy, a potential love interest, and truths about herself that will be realized in the next two volumes of the trilogy.

Alice Bloomer
5.0 out of 5 stars Fantastic
Reviewed in the United Kingdom on January 4, 2019
Verified Purchase
Absolutely loved this. Just the perfect adventure meets Shakespearean characters. GREAT way to introduce kids to Shakespeare’s words and characters in a friendly and fun way!! This should be required reading or at least on the summer reading lists for all schools!! 10 out of 5 stars!!!
Read more
Report abuse
See all reviews