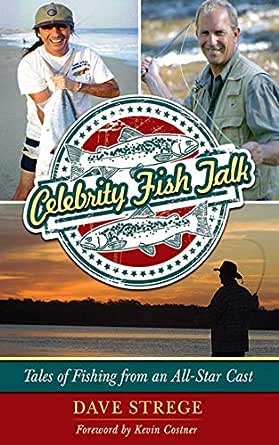 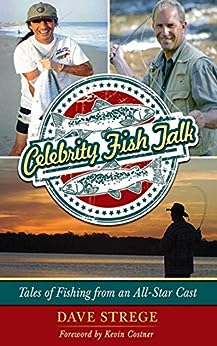 "A rare look into the recreational habits of some unlikely celebrities." -- Sea magazine<br /><br />"Almost worth buying (just) to see the photo of Kevin Costner, circa 1976, holding a jumbo string of dead bass." -- Tampa Tribune<br /><br />"Collectively, these fishy tales reveal the soul of the fisherman." -- ESPN Outdoors<br /><br />"We found ourselves alternatively chuckling to ourselves and laughing out loud at some of the antics of the celebrities." -- The Outdoor Wire<br /><br />"Will delight those who have and those who have not baited a hook in their lifetime...Refreshingly different sports book." --Tucson Citizen --This text refers to an alternate kindle_edition edition.

A cow fell from the sky and sank a fishing boat. This hard-to-believe-but-true story is included among the numerous fishing narratives in the book that introduce the tales from the rich and famous.

"Celebrity Fish Talk" is not just a book about celebrities. It tells about a shark attack, about an angler who fought a marlin for 33 hours before losing it, about how an angler survived being pulled overboard by a 350-pound tuna, and about funny game warden stories, fishing presidents and practical jokes in fishing.

"Celebrity Fish Talk" was written in a way that makes it an enjoyable read even for non-fishermen. Hope you enjoy it!

Dave Strege --This text refers to an alternate kindle_edition edition.

Dave Strege is currently a columnist for the Orange County Register, serving as Outdoors Writer since 1994. He lives in Orange County with his wife, Cindy. --This text refers to an alternate kindle_edition edition.
Read more

Tfcrazy1980
4.0 out of 5 stars decent, sometimes humorous stories
Reviewed in the United States on December 28, 2012
Verified Purchase
It was a decent book, sometimes funny, if your trying to learn about fishing, this isnt your book, but if you like fishing stories give it a read
Read more
2 people found this helpful
Helpful
Comment Report abuse

Mike O'Connor
4.0 out of 5 stars Stories of Celebs Baiting a Hook!
Reviewed in the United States on September 7, 2013
So, who knew Kevin Costner was a fishing devotee?!? Costner is one of several dozen celebrities - actors, producers, comedians, golfers, rock stars, etc. - who contribured fishing stories to CELEBRITY FISH TALK, TALES OF FISHING FROM AN ALL-STAR CAST, a 2012 Skyhorse release.

Costner figures heavily in Dave Strege's book, contributing about a half-dozen tales. Others came from the likes of Matt Lauer, Jay Leno, Alice Cooper, Maury Povich, Deion Sanders, Picabo Street, Ted Williams and Andy Garcia. They're divided up into chapters entitled 'Poetry with a Fly Rod,' 'Sometimes Death Tugs at the Line,' 'Fishing Follies,' 'Presidential Cast' and so on.

CELEBRITY FISH TALK is a lightweight but fun fishing book, very much geared to memories rather than technique. Recommended.