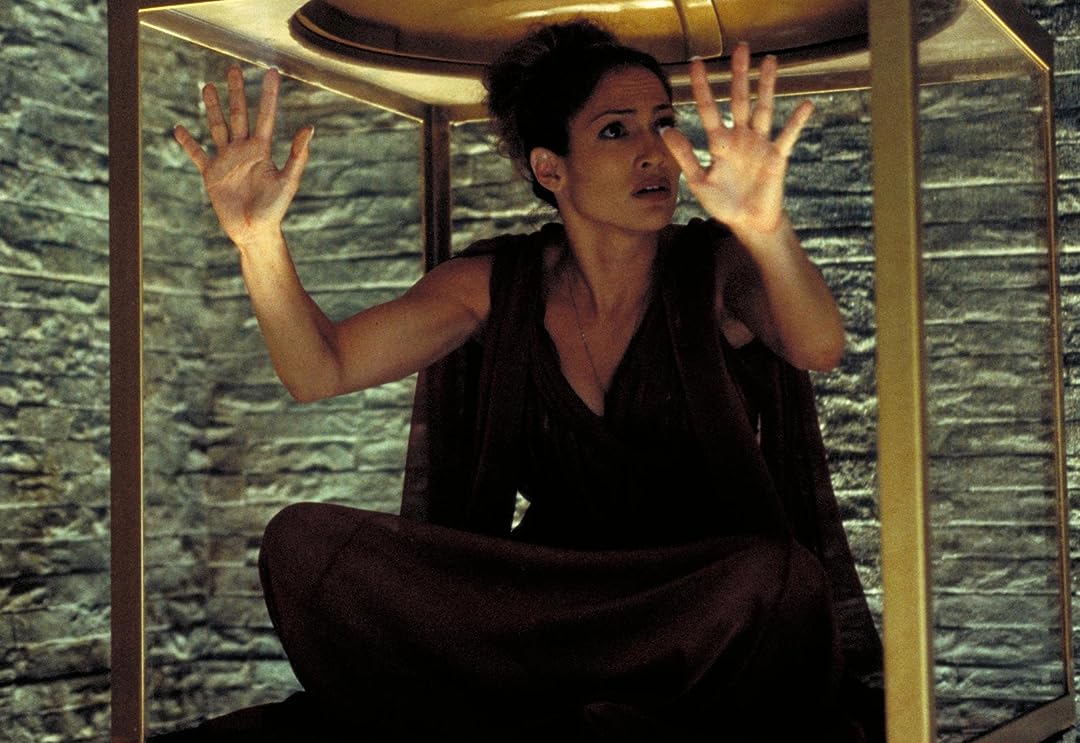 (4,081)6.41 h 47 min2000X-RayR
When Stargher, a serial killer who drowns his victims in torture cells and performs bizarre rituals with their bodies, falls into a coma, the FBI asks Deane to enter the his mind.

Banyon GarfeldReviewed in the United States on November 29, 2018
3.0 out of 5 stars
There's A Story Here, Buried Under The Visuals and The Horror
Verified purchase
I avoided this movie for years. Thought it would be too much horror-movie and less psychological suspense-thriller. It's actually a mixture of both. Further, the horror was actually tamer than I expected, although there are some seriously disturbing scenes that are not for the weak of stomach.

At it's heart though - beyond the visually inventive effects, the rich cinematography, the lush costumes and the suspense - lies a story about an innocent boy, who was so badly abused and damaged by his sadistic father and the abandonment of his mother, that he grew up twisted and gnarled inside of his mind and emotions. Unable to cope with both his demons and a rare illness, he becomes a serial killer of the worst magnitude.

The suspense part of the movie is how to catch him and save his latest (8th) victim) - who is going to die in less than 40 hours, as is the killer's pattern. Vince Vaughn is the FBI agent in charge of tracking him down. When the chase goes haywire, psychotherapist Jennifer Lopez is called in to do a kind of "mind-meld" with the killer, in an effort to uncover his secrets. Of course, once inside his mind , she gets way more than she bargained for.

For the first 2/3 of the movie, I thought Jennifer Lopez and Vince Vaughn were miscast, but they won me over by the final third of the movie. Actually the best acting was by Marianne Jean-Baptiste, in a medium-size but important part as one of the doctors involved in the "mind-melding" experiments. Vincent D'Onofrio is effective as the killer, while Jake Thomas plays his younger (boy) self with the right mixture of sensitivity and sympathy.

There are a few twists and turns, and the movie moves fairly quickly as it tries to cover alot of ground in a short period of time. There are elements here of Silence Of The Lambs, The Matrix, as well as any number of horror / suspense-thrillers and oddly enough, music videos. There is a fair amount of Catholic and religious imagery. Overall, I would not call this a classic, but it is a worthwhile watch if you are o.k. with the subject matter.

Logain UT AblarReviewed in the United States on November 1, 2018
4.0 out of 5 stars
Better than expected
Verified purchase
I heard a lot of really bad things about The Cell which prevented me from watching it until now. After seeing it for myself, I have to say that it's better than I expected. There are moments in this film that are visually stunning. Absolutely phenomenal. Jennifer Lopez looks incredible in the dream sequences and plays her part well enough. But it's Vincent D'Onofrio that really sold me. He played the hell out of his part and is THE reason to watch the film. His image in the dream sequences are sensational in its extravagant brutality which plays excellent compared to Jennifer Lopez's attire that ranges from the holy to the regal to the sexually charged BDSM themed. I didn't miss the tease of Jennifer Lopez in her panties in the apartment scene. Bringing back memories of her in Selena wearing the black tights.

Unfortunately, this brings me to the negative. The Cell has a good premise, it's delivered well all things considered but the aspects that really work are far too few. There aren't enough dream sequences, there isn't enough of King D'Onofrio, there isn't enough of Kim Chizevsky-Nicholls who looks absolutely incredible in the film and makes for a fantastic enforcer. Why we didn't see more of her is beyond me. Because of this, the ending is luke warm at best because earlier scenes have so much impact that you just KNOW the ending is going to be nuts, but it doesn't turn out that way. Quite the opposite.

The Cell is better than stated but not as good as it could have been. The imagery is incredible and worth the price of admission, the casting is good except for Vince Vaughn who just didn't fit IMO. If a remake is made, Jennifer Lopez and Vincent D'Onofrio have to star or no deal.
7 people found this helpful

louisReviewed in the United States on June 22, 2018
5.0 out of 5 stars
Does what it's supposed to
Verified purchase
Yep it's a movie. You put it in your DVD player and it plays.
16 people found this helpful

Gothic_PotatoReviewed in the United States on October 20, 2018
5.0 out of 5 stars
Afraid to be trapped in someone else's mind?
Verified purchase
I have seen this movie a few times; when it first came out, randomly a while back, and once again today. I see things differently each time. Mental illness, whether brought on by environment or physical illness, can be torturous. The social worker played by Jennifer Lopez willing enters a serial killer's brain to help find the latest victim. The set design, costumes, and acting pulls it all together in a frighteningly believable dream state. Beautifully done. Definitely an adult only movie if for no other reason than the psychopathic visuals.
8 people found this helpful

Amy LaRussoReviewed in the United States on October 2, 2018
5.0 out of 5 stars
YES!
Verified purchase
One of my favorite movies ever. In it's time it was one of the most beautifully made films and watching it again, makes me wish it could be remastered to be in higher definition.
A time even though Vincent D'Onofrio was as creepy as a creep could come he was also one of the sexiest villains on film.
9 people found this helpful

Jim or DotReviewed in the United States on October 16, 2018
3.0 out of 5 stars
3 of 5 stars. Pointless, but not bad and not particularly good.
Verified purchase
Interesting. Oh -- not the movie but some of the reviews. The movie involves a slightly different twist on a common theme in which the police solve a series of crimes with the help of ESP or something similar. In this case, technology provides the ESP connection, releasing a plausible though not compelling case for a collage of images and special effects to represent the "mind" of the killer. The special effects were very good and the graphic art was very good and Jennifer Lopez is always very good. The only thing really lacking is a principle or moral. Is it "pathological killers have weird violent dreams?" Or maybe, "If you are fighting pathological killers by entering their dreams, be sure to wear a stylized nun outfit and carry a double edged sword?" In any case, the movie overall is an answer in want of a question.

It's difficult to think of the movie as frightening. Entertaining is a better word. A few reviewers seem quite certain that any negative review of the film must be born of fear or a lack of capacity to understand the "issues," ironically, as well as they do. And, in time, they might find "grandmothers" have seen enough of the real world to not be frightened at all by a film like this.

J. TrimbleReviewed in the United States on August 14, 2015
4.0 out of 5 stars
You will be creeped out
Verified purchase
I haven't seen this since maybe the original DVD release, and I forgot the reasons I haven't seen it in 15 years. This is seriously creepy, and the serial killer makes Hannibal Lecter seem like Mr. Rogers. The director does not pull any punches showing you the depth of his depravity, either. Be warned.

As far as the release to Blu-Ray, I would have to say that this is a perfect restoration, both video and audio. I have an up-converting-to-4K Blu-Ray player, and I was stunned at how gorgeous it is from the opening scene to the last moments.
9 people found this helpful
See all reviews
Back to top
Get to Know Us
Make Money with Us
Amazon Payment Products
Let Us Help You
EnglishChoose a language for shopping. United StatesChoose a country/region for shopping.
© 1996-2021, Amazon.com, Inc. or its affiliates