Sold by: PurselBooksellers
Add to Cart
$13.69
+ Free Shipping
Sold by: Tony’s Collectibles
Have one to sell?
Sell on Amazon 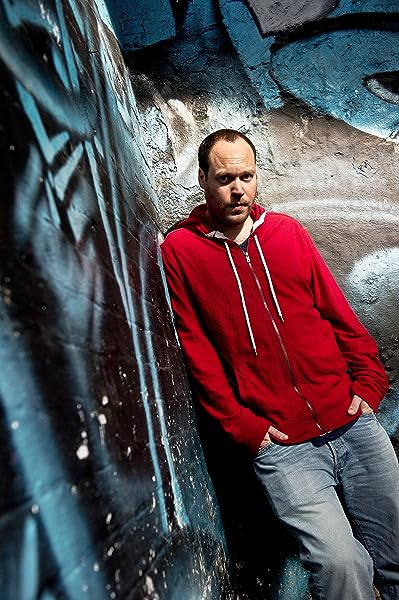 
[STAR] World Fantasy Awardwinner Tidhar (A Man Lies Dreaming) magnificently blends literary and speculative elements in this streetwise mosaic novel set under the towering titular spaceport. In a future border town formed between Israeli Tel Aviv and Arab Jaffa, cyborg ex-soldiers deliver illicit drugs for psychic vampires, and robot priests give sermons and conduct circumcisions. The Chong family struggles to save patriarch Vlad, lost in the inescapable memory stream they all share, thanks to his father’s hack of the Conversation, the collective unconscious. New children, born from back-alley genetic engineering, begin to experience actual and virtual reality simultaneously. Family and faith bring them all back and sustain them. Tidhar gleefully mixes classic SF concepts with prose styles and concepts that recall the best of world literature. The byways of Central Station ring with dusty life, like the bruising, bustling Cairo streets depicted by Naguib Mahfouz. Characters wrestle with problems of identity forged under systems of oppression, much as displaced Easterners and Westerners do in the novels of Orhan Pamuk. And yet this is unmistakably SF. Readers of all persuasions will be entranced.”
Publishers Weekly, starred review

[STAR] . . . a fascinating future glimpsed through the lens of a tight-knit community. Verdict: Tidhar (A Man Lies Dreaming; The Violent Century) changes genres with every outing, but his astounding talents guarantee something new and compelling no matter the story he tells.”
Library Journal, starred review

It is just this side of a masterpiece  short, restrained, lush  and the truest joy of it is in the way Tidhar scatters brilliant ideas like pennies on the sidewalk.”
NPR Books

A marvellous, multi-faceted story that flows gently from one character to another like an intimate private tour of Tel Aviv and the spaceport at its centre.”
SF Crowsnest

Tidhar, who the Guardian newspaper compared to Philip K. Dick, has given the world a fascinating and imaginative snapshot of a distant future.”
Charlie Shifflett, author of Accomplices

Central Station is in every way a literary masterpiece.”
The Future Fire

”A sprawling hymn to the glory and mess of cultural diversity.”
Guardian

Beautiful, original, a shimmering tapestry of connections and images - I can't think of another SF novel quite like it. Lavie Tidhar is one of the most distinctive voices to enter the field in many years.”
Alastair Reynolds, author of the Revelation Space series

If you want to know what SF is going to look like in the next decade, this is it.”
Gardner Dozois, editor of the bestselling Year’s Best Science Fiction series

A dazzling tale of complicated politics and even more complicated souls. Beautiful.”
Ken Liu, author of The Grace of Kings

If Nalo Hopkinson and William Gibson held a séance to channel the spirit of Ray Bradbury, they might be inspired to produce a work as grimy, as gorgeous, and as downright sensual as Central Station.”
Peter Watts, author of Blindsight

Central Station is masterful: simultaneously spare and sweepinga perfect combination of emotional sophistication and speculative vision. Tidhar always stuns me.”
Kij Johnson, author of At the Mouth of the River of Bees

Central Station boasts complexity without complication, sharp prose, and a multi-dimensional world.”
Jeffrey Ford, author of The Girl in the Glass

Tidhar weaves strands of faith and science fiction into a breathtaking and lush family history of the far future.”
Max Gladstone, author of Three Parts Dead

Disturbingly strange, yet bizarrely familiar, like implanted memories from a future you have not yet lived. I loved it.”
Eileen Gunn, author of Stable Strategies and Others

A mosaic of mind-blowing ideas and a dazzling look at a richly-imagined, textured future.”
Aliette de Bodard, author of The House of Shattered Wings

"I recommend it highly. It'll stay with you for days, because every idea in it has more ideas under it. It's all of science fiction distilled into a single book."
Warren Ellis, author of Transmetropolitan and Gun Machine

"It's an amazing book!"
Jewelle Gomez author of The Gilda Stories

It's a compelling collection that mixes the epic and the intimate, one that succeeds at being profound, incredibly moving and, quite simply, stunning.”
Starburst Magazine, 10 out of 10 stars

Central Station combines a cultural sensibility too long invisible in SF with a sensibility which is nothing but classic SF, and the result is a rather elegant suite of tales.”
Locus

I smelled the smells of Tel Aviv in the first paragraph of the introduction, meat cooking and sweat and sand and Mediterranean air. I saw the city squares, flowing with life and laughter and languages. I felt like I had come home.”
The Warbler

The breadth of Tidhar's imagination in this book just left me gaspingif you love worldbuilding, good characterisation and a world of possibilities, this is definitely for you.”
Blue Book Balloon

”A gorgeous vision of what more likely than not will be the world to come and beautifully written to boot.”
Shelf Inflicted

"...a wonderful tribute to classic SF..."
Locus, Year in Review

”This is the future we were promised. . . . In Central Station the future is all around, all those glittering, exciting, shimmering things that we learned to recognise from science fiction.”
Paul Kincaid, the Anglia Ruskin Centre for Science Fiction and Fantasy

”A tapestry of individual characters, every one artfully and lovingly drawn down to the very least, whose lives touch and interact with each other, but who exist in their own right.”
Adrian Tchaikovsky, Shadows of the Apt

”Amidst the loves and the fears, Tidhar reminds us of the intoxicating and invigorating power of longing and nostalgia.”
The Jewish Standard

“Every page was a delight.”
―Astounding Yarns

British Science Fiction, British Fantasy, and World Fantasy Award-winning author Lavie Tidhar was born in Israel. He has traveled and lived all over the world, including in Vanuatu, Laos, and South Africa. Tidhar has been compared to Philip K. Dick by the Guardian and to Kurt Vonnegut by Locus. His most recent novels, The Violent Century and A Man Lies Dreaming, were published to rapturous reviews in the UK, with the Independent referring to them as masterpieces. Tidhar currently lives in London.

Page 1 of 1 Start overPage 1 of 1
This shopping feature will continue to load items when the Enter key is pressed. In order to navigate out of this carousel please use your heading shortcut key to navigate to the next or previous heading.
Back
Next
Pages with related products. See and discover other items: gaming station