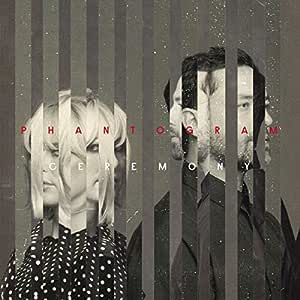 Lauded as an experimental, alternative band that's never been married to one genre, Phantogram-comprised of lifelong friends Josh Carter and Sarah Barthel-challenge the zeitgeist with their signature blend of hard-hitting beats, guitar-driven dark psychedelia and electronic pop. On March 6th they will release highly anticipated fourth studio album, Ceremony, which marks a rebirth and embodies a dark but hopeful chapter for the duo. Features recent singles "In A Spiral" and "Into Happiness".

Paul AllaerTop Contributor: Classical Music
TOP 50 REVIEWERVINE VOICE
4.0 out of 5 stars Great return to form on Phantogram's 4th album
Reviewed in the United States on March 6, 2020
Phantogram is a New York-based electronic duo consisting of Sarah Barthel and Josh Carter. Their 2009 debut album "Eyelid Movies" was an immediate sensation (and still the band's best album), and 2014's "Voices" was a great follow-up. However when they released "Three" in 2016, something felt very off, and I just didn't enjoy the album all that much. Now after a long lay-off the duo returns with this new album.

"Ceremony" (11 tracks; 37 min.) opens a bit tentatively with the piano-fronted "Dear God", only to then jump into the thick of the action. "In a Spiral" (3rd single) is a stadium-sized dance-along/sing-along ("I can see the end is comin' 'round/Every day, every day in a spiral/Better help me now, I'm goin' down/Every day, every day in a spiral"), its my favorite song on this album. But wait! there is much more! "Into Happiness" (1st single) is another hard-charging, can;t miss tune. "Pedestal" (4th single) doesn't let up. Holy cow, this album is worth getting just for those songs. We catch our breath on "Love Me Now". Later in the album we get "Mister Impossible" (2nd Single), another irresistible tune (and one of the album's few where Josh also sings). The album closes with the slowburner 6 min. title track. Nice! It is clear that with "Ceremony", Phantogram has rediscovered their mojo.

You haven't had the full Phantogram experience if you haven't seen the ban in concert. Live, they perform as a foursome, with a live drummer and guitarist, and the songs sound much heavier than what you hear on the albums. I've had the great fortune of seeing their shows a number of times over the last decade when they have come to Cincinnati (where I live), including also when they played the 2016 Bunbury music festival as Big Grams with Big Boi. I can only hope they will tour massively in support of this great new album.

E
5.0 out of 5 stars Album of Bangers
Reviewed in the United States on March 6, 2020
They continue to grow musically while keeping their original style and groove. So dope!
Read more
2 people found this helpful
Helpful
Comment Report abuse

Tiffany
5.0 out of 5 stars So worth the wait :)
Reviewed in the United States on March 8, 2020
OBSESSED 💕 Such a beautiful message behind this album, too. It’s been on repeat since Thursday night 🤣
Read more
3 people found this helpful
Helpful
Comment Report abuse

John
5.0 out of 5 stars WOW
Reviewed in the United States on March 7, 2020
This is an emotional heartfelt burst of some really great songs. Amazing album!
Read more
2 people found this helpful
Helpful
Comment Report abuse
See all reviews from the United States