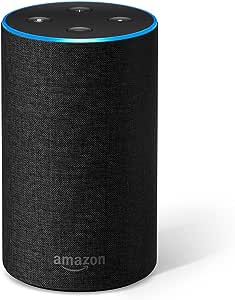 Secure transaction
Your transaction is secure
We work hard to protect your security and privacy. Our payment security system encrypts your information during transmission. We don’t share your credit card details with third-party sellers, and we don’t sell your information to others. Learn more
Details
Ships from
Amazon.com Services LLC
Sold by
Amazon.com Services LLC
Return policy: This item is returnable
In most cases, items shipped from Amazon.com may be returned for a full refund.
Read full return policy
Support: Free Amazon product support included
What's Product Support?
In the event your product doesn’t work as expected, or you’d like someone to walk you through set-up, Amazon offers free product support over the phone on eligible purchases for up to 90 days.
To access this option, go to Your Orders and choose Get product support.
Certified Refurbished Ech... has been added to your Cart
You’ve marked this as a gift, so it will not be linked to your account. To link to your account, first de-select "This is a gift"
Account linking is not available when ordering more than $PREREG_MAX_QUANTITY of this device.

from Amazon.com
$59.95
Add selected items to cart No thanks

Alexa has tens of thousands of skills and counting. Skills are like apps and help you do more such as playing Jeopardy!, meditating with Headspace, and falling asleep to rain sounds. Create your own personal skills and custom responses with Alexa Skill Blueprints. Just say “Alexa, help me get started with skills.”

New skills are being added all the time. Discover them in the skills section of the Alexa app or visit the skills store.

4.6 out of 5 stars
4.6 out of 5
5,811 global ratings
How are ratings calculated?
To calculate the overall star rating and percentage breakdown by star, we don’t use a simple average. Instead, our system considers things like how recent a review is and if the reviewer bought the item on Amazon. It also analyzes reviews to verify trustworthiness.

srichey216
4.0 out of 5 stars Your Enjoyment Depends On What You Do With It
Reviewed in the United States on September 9, 2018
Color: Sandstone FabricVerified Purchase
I bought this on Prime Day and at first I was going to send it back. I live by myself in a small apartment, I have a Smart TV, a Smartphone etc., so my second guessing was hey, what on earth am I ever really going to use this thing for? I mean, if you have a large, multi-level "smart" home, 3 kids with busy schedules then hey sure, "drop in" on Timmy and remind him he has to get ready for soccer practice or tell your spouse out in the garage that dinner is ready etc. but for me, I just don't use it to it's full capacity you know? I have set up playlists in Amazon Music and can ask Alexa to open those, I listen to my local talk radio station programs overnight, I ask her what time it is when I wake up in the middle of the night, and I like the Big Sky weather app. Other than that I only use the occasional fluff skills like tell me a story or a joke and so on which serve no real purpose.

I'm sure if I add more skills to the Echo, it would become more integral to my life. I will say I definitely can see the overall purpose of it and how it can and I'm sure is very, very useful to many people.

PS: Alexa does not know winning lottery numbers in advance, she won't do your laundry or wash the dishes, and she definitely won't scoop out the cat box. I know, I've asked LOL. Make her do any of these things and you've got a solid winner.
Read more
148 people found this helpful
Helpful
Report abuse

Amazon Customer
1.0 out of 5 stars Echo family not recommended: Alexa provides one frustration after another after another
Reviewed in the United States on October 31, 2018
Color: Charcoal FabricVerified Purchase
Echo is a decent Bluetooth speaker; Alexa's news flash brief (NPR) is convenient, including local weather, once you set the right location within the Alexa website. Why can't you do that directly with Alexa? Just one of many, many Alexa frustrations.

The killer failure is when I asked Alexa to play an album I have purchased within Amazon Music. Instead of playing me the content Amazon agrees I've already purchased, Alexa played me samples and once again tried to sell me Amazon Unlimited. Worse, during the upsell, she asked, "Do you want to learn more?" I answered "NO," which she ignored.

Alexa works with Tune In radio, but apparently can only select stations named in the English language. She has yet to select for me an Israeli radio station, after multiple attempts of multiple stations on two separate Echos. How hard could it be to train Alexa to identify the names of a finite number of foreign language stations offered by Tune In?

Many of your Kindle books can be read aloud by Alexa. However, she has just one voice, no options, and I'd rather go back to my early Kindle and hear a different voice than the one which constantly frustrates me.

Since Amazon sells cheaper decent Bluetooth speakers, I do not recommend Echo, and that's not even considering the privacy risks of sticking Amazon microphones in your living space in this era of cloud computing break-ins. If Alexa actually did what I wanted, I'd consider it a moderately risky trade-off, letting foreign governments hear what's happening in my house, but Alexa is far from keeping her end of the bargain. Amazon has a lot to fix in this product line, and should compensate early customers as product testers.

Update Nov 2020: Over time, my second Echo lost its reach to my wifi access point, making its primary use, audio in the far bathroom, impossible. That echo is parked and not used, though it is still capable of working adjacent to the wifi access point, where it's redundant. Other devices seem to have no problem with the 2.4GHz reach to that bathroom, so for now, I've replaced the Echo with my old Kindle Fire. The sound is poor, but better than nothing, and at least I'm no longer arguing with Alexa. I've grown to truly loathe her and the management of the Amazon speech processing group she represents.

My last remaining Echo use was to control a lamp on my Amazon smart switch. Suddenly, tonight, Alexa has forgotten the name of that switch she's been controlling for over two years, even though I can still control it from the screen of my phone. There was no warning of software updates, and no warning of changes to the user interface. Boom. Failure. Shame on Amazon again and again and again. Where's my compensation for this huge rip-off? Echo not recommended. Embarrassed stockholder.
Read more
90 people found this helpful
Helpful
Report abuse

Owner
5.0 out of 5 stars My smart home must have!
Reviewed in the United States on August 11, 2018
Color: Charcoal FabricVerified Purchase
I am a new Echo user, but I love them. I started with a couple Dots because I thought I would just want to use the microphones to turn smart switches on and off. However, when I discovered I could listen to sounds of nature, I wanted the sound quality of this model. I am now drifting off to sleep to the sound of waves or rain. That is awesome! I have also listened to music and the Echo sounds surprisingly good, however, I am rarely in the same room for long so I like to use louder speakers with a subwoofer so I can hear my music from other areas. I could sync my music and play it from Echos all around the house, but that would be expensive to replace my dots and add more Echoes!
Read more
83 people found this helpful
Helpful
Report abuse

Kindle Customer
5.0 out of 5 stars excellent sound quality
Reviewed in the United States on August 18, 2018
Color: Oak FinishVerified Purchase
I ordered a refurbished Echo 2 and was not disappointed. I already have an Echo Show I use in my home office, and have several Eufy Genies. The Genie in my bedroom has been randomly resetting and having audio issues, so I decided to go with an Echo. I opted for a refurbished one to save a few $$ and chose the Oak finish. The only clue it was not brand new when receiving it was the packaging: well packaged, tightly wrapped in plastic/cardboard so it wouldn't move, but in a generic box instead of the shiny color photo packaging of a new one. Once unwrapped and plugged it's indistinguishable from a new one. Set up and sound quality are big upgrades from the Eufy Genie (which is comparable to the Echo Dot, but with (or so I've read) better sound quality and lower cost). It looks, sounds and works far better than the unit it's replacing. If/when the Genies in other rooms start having problems, I'll have no hesitation getting another refurb Echo 2 (maybe in Walnut though). :)

I highly recommend it as a good first start with Alexa. Once you start adding home automation skills, it's easy to get hooked on it, even though she still gets a little annoying when responding "I don't know to do that" to a request she's done hundreds of times--makes me think Alexa's AI is stalling for an excuse like a mischievous 12 year old! ;^)
Read more
62 people found this helpful
Helpful
Report abuse

R. Romaine
5.0 out of 5 stars A good buy
Reviewed in the United States on August 11, 2018
Color: Sandstone FabricVerified Purchase
Really good Echo plus I saved $20 by getting a refurbished one. It didn’t come in a branded box (just a plain brown box), but it came with everything I needed to get up and runnng. I got this mostly to play music in my basement. Compared to my original Echo, I think it sounds better. A little more bass. It might be the location though. I love the size. It easily fits on the shelf by my laundry. I do wish it still had the volume ring. It is the one thing I miss. I have this on a high shelf so I can’t see the buttons on top.

I have some smart lights in my house. I can control them with the Echo. I also have the Echo Connect so I can answer the house phone with this Echo as well. All in all, I’m very happy with this purchase.
Read more
50 people found this helpful
Helpful
Report abuse
See all reviews