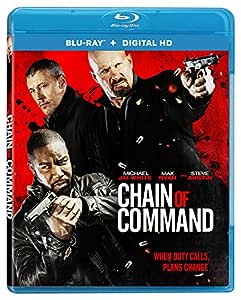 Michael Jai White (Actor), Max Ryan (Actor), Kevin Carraway (Director) & 0 more Rated:
R
Format: Blu-ray
3.4 out of 5 stars 150 ratings
See More
Available at a lower price from other sellers that may not offer free Prime shipping.
Digital Copy Notice: The purchase of this DVD or Blu-ray disc comes with rights to access a complimentary digital version from the production company. To access the digital copy, redeem the code included in your product packaging before the expiration date. Learn more

Special Operative James Webster (Michael Jai White) just returned home from duty, only to witness the brutal slaying of his brother. Webster immediately tries to retaliate and hunt down the perpetrators, but as he delves deeper into the secret world of corruption and murder, he finds himself at the center of a deadly conspiracy that cuts deep inside the walls of the US Government. With the most ruthless military assassin (Steve Austin) hot on his trail, Webster must expose the corrupt high-ranking officials before he becomes just another victim of the nefarious plot.

3.4 out of 5 stars
3.4 out of 5
150 customer ratings
How does Amazon calculate star ratings?
Amazon calculates a product’s star ratings based on a machine learned model instead of a raw data average. The model takes into account factors including the age of a rating, whether the ratings are from verified purchasers, and factors that establish reviewer trustworthiness.
Top Reviews

Tony_RAL
1.0 out of 5 stars Good News: It's free with Prime; Bad News: It exists
Reviewed in the United States on May 20, 2020
Verified Purchase
The movie, reportedly completed with a budget of $5 million, was shot in Hamilton, OH, a suburb of Cincinnati. As a reward for paying their city taxes the previous year, any local male between the ages of 25-65 got a speaking role in the film.

The director made the most of his budget by filming this with his parents' 1994 RCA VHS camcorder and doing every scene on the first take. He also rented a single Chrysler Sebring to be used by all the different henchmen. Sometimes he liked to put a license plate on the car. Luckily he did not skimp on stunt safety equipment as you'll notice a big blue gym mat breaking a stuntman's fall in one of the scenes.

Credit to the writers for doing their research. They knew that every town's local Army Lt. Col also runs the SWAT team and tries to hide a British accent. They also knew that Lt. Colonels prefer to be called "Lieutenant" instead of "Colonel" and that having a clean shaven face is optional once that rank is achieved.

On to the headliner, Michael Jai White stars as "Michael Jai White who lost a bet and had to do this movie". You'll watch him struggle to teach other actors how and when to raise and lower the pitch of their voice, change facial expressions, and keep the dialog natural. You'll cheer for him as he actually kicks the other actors in the stomach and face. Finally, you'll be relieved when the final credits roll and know that he is free from the bounds of filming this movie.

HopsHead
2.0 out of 5 stars I'd pass on this one
Reviewed in the United States on September 25, 2015
Verified Purchase
I've seen about 3 or 4 of Michael's movies and thought they were all great, so I thought this one would be great too. I didn't think it was great at all(2.5 stars). I thought it was stale, artificial and just down right not entertaining. It was really low-budget and it showed. [A bit of a spoiler alert: there is no fight scene between him and Steve Austin, he just shoots Steve]. Several times I thought about not watching the rest. I didn't think it was terrible, but just blah. I recommend his movie Falcon Rising.
Read more
9 people found this helpful
Helpful
Comment Report abuse

WALT
2.0 out of 5 stars YOU CAN AFFORD TO MISS THIS ONE
Reviewed in the United States on May 17, 2020
Verified Purchase
ACTUALLY, I USUALLY ENJOY BOTH ACTORS, I.E. STEVE AUSTIN AND ESPECIALLY MICHAEL JAI WHITE. HOWEVER, SOMETHING,
WHETHER THE DIRECTION OR SCRIPT, WAS OFF. IT SIMPLY DID NOT HAVE THE USUAL CHARISMA THAT EACH ACTOR USUALLY PROJECTS. MAYBE THERE WAS A BIT OF EGO COMPETITION. HAVING WATCHED ONE HALF OF THE FILM, I COULD NOT SUFFER
ANY FURTHER. I WOULD REALLY SKIP THIS FILM AND TRY TO CLICK ON TOP OF THE SCREEN, TO WHAT OTHERS WATCHED,
AND BOOKMARK SOME OTHER SIMILAR MOVIE....BETTER ONES. ENJOY.
Read more
Helpful
Comment Report abuse

Gillsmeadow
2.0 out of 5 stars 1970's music, low budget film - but you'll laugh at the acting at some point
Reviewed in the United States on January 5, 2016
Verified Purchase
I'm sorry that I wasted money renting this movie. I kept looking back to see if it was actually a 2015 release! The music, I swear, is from a 1970's drama! The acting was not at all what I expected and the only reason I gave it 2 stars, is because we laughed at the martial arts movements which were hilarious! The bad guys, who are supposedly smuggling a ton of drugs over years and handling millions of dollars are driving the cheapest piece of crap vehicles you have ever seen!! The main actor, Michael Jai White, actually had a better car than the men who were running the drug operation. The buildings, scenery and backdrops were all very plain and were obviously LOW BUDGET. This movie should have been FREE. We watched the whole movie and are disappointed that it didn't live up to its' potential. Our fault for not reading reviews first.
Read more
One person found this helpful
Helpful
Comment Report abuse

Bruce Winning
5.0 out of 5 stars You can tell they want to get dead; they are pointing a gun at you
Reviewed in the United States on May 11, 2019
Verified Purchase
First I want to thank Amazon Prime Video for recommending this feature in an email that is 16:9/5.1 surround. I will probably watch that kind to the end like I did. But I do like the action and violence. There is plenty of shooting. There is fine foot pursuit. I like the hand-to-hand combat meaning punching and kicking and the use of a knife. Like here is my knife take it from me and kill me with it. This is the template movie for my seeing others like this.
Read more
Helpful
Comment Report abuse

Coach
1.0 out of 5 stars This Sucks Big-time!
Reviewed in the United States on May 25, 2019
Verified Purchase
First of all, Steve Austin is worthless in the movie, he basically just talks. Dialogue throughout the film is horrible. All the killing, in a city, and you never see any first responders, THE ENTIRE MOVIE! I guess the dead bodies disappear in a few seconds like in a video game...smh. Michael Jai White's career is heading the same direction as Wesley Snipes, in the toilet! If it wasn't free on Prime, I would demand a refund.
Read more
Helpful
Comment Report abuse

Brock
2.0 out of 5 stars THIS IS PRETTY BAD
Reviewed in the United States on April 16, 2019
Verified Purchase
A whole lot of movie/scene mistakes and some D rated fight scenes. Continuity of the story line and dialogue is all over the place. Even though there is some seasoned, experienced actors in this movie, it was very hard to watch or hold one's interest. 1.5 stars
Read more
One person found this helpful
Helpful
Comment Report abuse

Byrddog
3.0 out of 5 stars WHAT!!!
Reviewed in the United States on May 21, 2020
Verified Purchase
I actually enjoyed this movie... But if movie ratings were like abc, etc. this movie would be Z! It s***ed. But at the same time I liked it... Strange, never had that happen before...? I think I could even watch it again... Steve Austen said "change tactics" so often that I thought, "he needs to change his acting tactics"..hahahahaha
Read more
Helpful
Comment Report abuse
See all reviews from the United States

Yo
5.0 out of 5 stars Five Stars
Reviewed in Canada on January 22, 2018
Verified Purchase
Great action movie. Thank you.
Read more
Helpful
Sending feedback...
Thank you for your feedback.
Sorry, we failed to record your vote. Please try again
Report abuse

Gillo
4.0 out of 5 stars Four Stars
Reviewed in Canada on July 15, 2016
Verified Purchase
evaluation says it all
Read more
Helpful
Sending feedback...
Thank you for your feedback.
Sorry, we failed to record your vote. Please try again
Report abuse