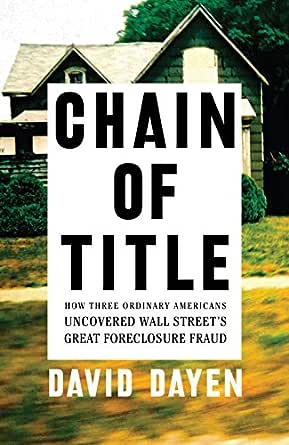 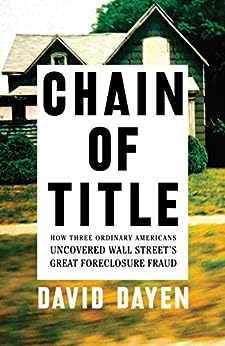 Praise for Chain of Title:
A Kirkus Best Book of 2016

“Chain of Title is a careful documentation of the mortgage fraud at the heart of the 2008 financial crisis. . . If you’re looking for a book to read over Labor Day weekend – one that will that will get your heart pumping and your blood boiling and that will remind you why we’re in these fights – add this one to your list.”
—Senator Elizabeth Warren

“Prepare to be surprised, and angry… the homeowners' stories are emotional roller coasters. Dayen skillfully narrates a slow reveal and sprinkles in some lively metaphors.”
—The New York Times Book Review

“Hitchcockian... Meticulously researched, enthralling, and educational, this addition to the literature of the Great Recession calls out for its own big-screen adaptation.”
—Publishers Weekly

"Note: Dave Dayen's magnificent Chain of Title is essential to understanding how people became victims of the kind of rigged casino that made the Steve Mnuchins rich…”
—Esquire

"In the wake of the devastating 2008 financial crisis, David Dayen has become one of the nation’s most knowledgeable, astute and important voices in identifying the culprits and documenting the efforts to protect them. His new book is one of the most important yet written on the causes of that crisis, the abject failures of the political class to punish the wrongdoers, and the dangerous refusal on the part of the nation’s elite to safeguard against future and even worse meltdowns."
—Glenn Greenwald

"This is the story, one of its characters tells us, of an unlikely ‘crime scene’: the real estate courts of Florida, where professional fraudsters greased the skids to kick people out of their houses in order to prop up Wall Street’s profits, while judges looked the other way. And, it is the story of a prairie fire—begun by ordinary Americans who brilliantly and courageously fought back when our leaders refused to do so. All in all, it is one of the best books about the law and American life that I ever have read."
—Rick Perlstein, author of Nixonland and The Invisible Bridge

"Chain of Title is a sweeping work of investigative journalism that traces the arc of a criminally underreported story in America, the collapse of the rule of law in the home mortgage industry. By following three victims of illegal foreclosure practices, Dayen humanizes and brilliantly illuminates a vast scam unseen by the public because it’s been indecipherable to everyone but a few industrious housing lawyers—as he shows, even judges don’t understand it. The nightmare scavenger-hunt pursued by homeowners like Lisa Epstein leads to a horror-ending: behind the dream of home ownership lies a lawless jungle, owned and operated by banks, where there are no rules to protect families and their property."
—Matt Taibbi, author of The Divide

"David Dayen first wrote about foreclosures as a scruffy blogger and consistently beat almost every established financial reporter to the story. Now he has written the best history of that shameful period. The mortgage industry spent untold millions to spread the story they created from whole cloth after the crisis hit: families who lost their homes were mostly undeserving spendthrifts trying to shirk just debts. Chain of Title tells the real story and the real story should offend the sense of justice of every American with a conscience."
—Former congressman Brad Miller (D-NC), original co-author of the section of the Dodd-Frank Act that created the Consumer Financial Protection Bureau

David Dayen is a contributing writer to Salon and The Intercept and a weekly columnist for the New Republic and the Fiscal Times. Other outlets that publish his work include Vice, The Nation, the American Prospect, Naked Capitalism, and In These Times. He lives in Los Angeles.
--This text refers to the paperback edition.

4.7 out of 5 stars
4.7 out of 5
135 global ratings
How are ratings calculated?
To calculate the overall star rating and percentage breakdown by star, we don’t use a simple average. Instead, our system considers things like how recent a review is and if the reviewer bought the item on Amazon. It also analyzes reviews to verify trustworthiness.
Top reviews

Maui, HI
5.0 out of 5 stars What You Must Know in Order to Preserve America
Reviewed in the United States on May 14, 2016
Verified Purchase
Never before has a non-fiction book detailed the truth in such scandalizing description highlighting the corruption,fraud and intentional deception perpetrated on the American homeowners by Wall Street banksters. The mafia-like undertones have permeated our state and federal legislators and our courts. Judges are seemly told to squash homeowners to keep the banks liquid and save their pension funds and investments (which really no longer exist). The time now is to make sure every foreclosure judge and legislator receives a copy of this book with a note: "Educational reading from your constituents and homeowners in our state."
Read more
45 people found this helpful
Helpful
Comment Report abuse

g3 from the UP
5.0 out of 5 stars Eye Opening Account of Collusion by the 1% to Foreclose Millions out of their Homes
Reviewed in the United States on August 11, 2016
Verified Purchase
I just finished this extraordinary book, and I am so angry at the Obama administration, the Florida clerks of court and state judges, and the network of banks and other financial institutions who collaborated to screw home owners across this country.

I have always considered myself a liberal Democrat, but one who spent her career lawyering for the US Department of Justice and had a healthy respect for the ultimate fairness of the judiciary and the rule of law. The evidence in this book of collusion, special interests, big money versus the little guy, and how we were all betrayed by the gutless White House and DOJ has opened my eyes and turned my head around. I am sickened by what I read here.

This history does feature some extraordinary individuals, three laypeople who set aside their lives to fight foreclosure fraud for years because it was the right thing to do. But ultimately, they got screwed like everyone else.by the powers that be, who were cleverly manipulated by some law firms and lawyers I already knew were doing the work of the devil.

I have met many people who lost their homes to foreclosure, and I have seen firsthand the psychological devastation that they experienced. Had I known then that the entities who foreclosed likely did not even have standing to do so, I could have tried to help, but I had no idea until reading this book.

I hope this work, the author's first, gets a lot of acclaim at book awards time, and that he keeps writing because his first effort is an A+ achievement.

Bob Moore
4.0 out of 5 stars If you want to understand why Americans are angry, this is it!
Reviewed in the United States on October 1, 2016
Verified Purchase
Having worked in Canada's financial and mortgage industry for all of my 40 year career, I find it incredible that there was such a large scale of mortgage foreclosure fraud going on south of the border. Incredible! I don't believe it! And yet over 8 million American families lost their homes to foreclosure after the 2008 Great Recession. I've read a number of books on how Americans were put into sub-prime mortgages due to the greed of mortgage brokers and Wall Street banks. But then the American homeowner was hit with a double-whammy with foreclosure fraud. This ranged all the way from people who wanted to re-finance their mortgage to people who had no mortgages being thrown out on the streets. And the courts wouldn't believe them.

D. Aziza
5.0 out of 5 stars Must learning !
Reviewed in the United States on July 6, 2016
Verified Purchase
Loved this book;
it focuses on the tail end of it; foreclosures or more specially foreclosure FRAUD.
He does a good job of explaining the MERS problem;
and how banks have "no standing to foreclose".
When I got into the last 50 pages about all could think about was paying off my house.
Who wants to deal with these psychos. All of 'em: JP Morgan, Wells, BofA,
these people are crooks. Deranged for dolllars !
I read this thing in about 5 days; and it aint a quick read; it's slow readin' but
it is info. every American needs to know. My only correction would be he is a little wordy;
but a lot of details are interesting; so, he's definitely a good and well trained writer.
I couldn't have written that thing in 100 years. The details are extraordinary.