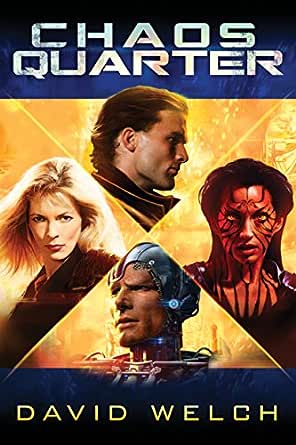 You've subscribed to The Chaos Quarter! We will preorder your items within 24 hours of when they become available. When new books are released, we'll charge your default payment method for the lowest price available during the pre-order period.
Update your device or payment method, cancel individual pre-orders or your subscription at
Your Memberships & Subscriptions
There was an error. We were unable to process your subscription due to an error. Please refresh and try again. 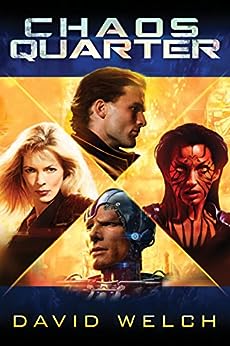 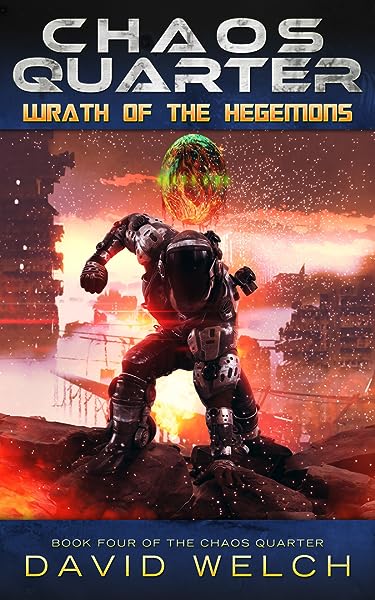 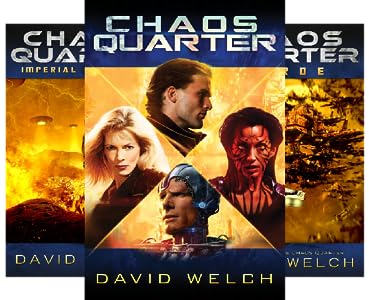 David Welch hails from the Capital District of upstate New York, where he has worked in banking and insurance. He is a graduate of St. Lawrence University and a longtime fan of action-adventure tales in all its many subgenres.

4.3 out of 5 stars
4.3 out of 5
454 global ratings
How are ratings calculated?
To calculate the overall star rating and percentage breakdown by star, we don’t use a simple average. Instead, our system considers things like how recent a review is and if the reviewer bought the item on Amazon. It also analyzes reviews to verify trustworthiness.
Top reviews

Emerson Jesseler
4.0 out of 5 stars Standard Sci-Fi Adventure With a Dirty Mind
Reviewed in the United States on February 2, 2019
Verified Purchase
This is an pretty standard scifi adventure, but with a dirty mind. Our hero, Rex, is given a ship and sent into the Chaos Quarter -- a lawless, untamed region of space (a concept that is a staple of scifi adventure). On the far side of this Chaos Quarter is ... something. A mysterious place from which no one ever returns. Rex's mission is to figure out what's going on over there.

"Everybody calls it the Chaos Quarter because that's what it is! It's the Wild West on steroids."

He assembles a rag-tag crew (another staple of standard scifi adventure) and goes poking around. Many times in this type of story, the mystery is more interesting than the resolution to that mystery, but this is an exception. The secluded civilization beyond the Chaos Quarter is far from anticlimax. They have a different and extremely creepy take on biologic technology. This is one of the most creative and promising parts of the novel.

Less promising is the main character, Rex. He is the maverick, seat-of-the-pants adventurer who naturally doesn't get along with his superiors (a staple of standard adventure stories). He also seems like a bit of a dick. He purchases sex from a strange striped woman and then basically kidnaps her when his ship has to make a quick getaway.

When Rex ends up with a newborn baby on his ship, he reveals that he has medicines that will make a woman lactate -- because that's something that comes in handy a lot? So he forces the kidnapped, striped prostitute into becoming a wet nurse for this baby. This is all justified by the fact that she was just a prostitute anyway so she's better off now. It's all very paternalistic and dick-ish.
Then they rescue a beautiful, blonde, brain-washed woman whose "body seemed almost too perfect to be real." Her individuality had been wiped away to make her effectively a mindless slave. They try to integrate her into their crew and call her "Seven-of-Nine." No, wait! She's called "Second." Completely different.

There is a lot of adventure and excitement in this story. The space battles are particularly engaging, with lovingly described fictional weaponry. Also the concept of a society based on living machines and technology is inventive. However, all the cowboy antics and random beautiful, helpless women makes this feel very much like an adolescent male fantasy. Almost like Porky's in space.

Don Morris
5.0 out of 5 stars Revised and republished by 47 North, an Amazon company!
Reviewed in the United States on December 13, 2016
Verified Purchase
While I liked the book, and hope the author succeeds, this is the second book I have purchased from an Amazon author that has been re-issued in a revised/updated form to continue the series, and Amazon expects me to purchase the new version so that I can continue the series with the new information. I thought one of the purposes of issuing in e-book format was to get updates/corrections that were issued. This policy makes me hesitant to purchase books from new authors in the future. I realize the new version is only $1.99, but if this is going to happen frequently that money can add up. 47 North (the publisher of the new version) is part of Amazon. Why are you treating your customers this way?

As I stated earlier, I enjoyed the book, and may buy others from this author. I hope I don't get stranded by Amazon like this again if I do.
Read more
3 people found this helpful
Helpful
Comment Report abuse

David
4.0 out of 5 stars An enjoyable read, looking forward to the next one.
Reviewed in the United States on January 3, 2014
Verified Purchase
I decided to take a break from my normal authors (mostly due to grinding through all they have written) and picked this book up based on the good reviews. After reading it I think that most of the people giving poor reviews of the book were either far to harsh or had unreasonable expectations. Just because the author doesn't write the book they way you would have liked doesn't make it a bad book, just a book you may not enjoy as much as others (like myself) might.

While there were some rough patches and some of the aspects of the universe were a bit awkward (though this may be intentional on the authors part) I enjoyed the story and the characters. There was enough character development to make me care what happens to them while levant room for more in later books.

The descriptions of the technologies and combat were a bit bare-bones for my preference but it didn't detract from the story and did make the book more about the people than the tech.

Overall it was a very enjoyable story with a tidy ending. There were enough unexpected developments and interesting characters to keep me interested for the entire book. I gave it four stars because I feel there is still room for improvement by the author and the book was a bit short, feeling a bit sparse if not truly incomplete.
Read more
Helpful
Comment Report abuse

Ocean View Retiree
4.0 out of 5 stars Interesting Concept, Good Action
Reviewed in the United States on October 28, 2013
Verified Purchase
One of the fun things about reading science fiction is seeing how different facile-minded authors envision human development over the next centuries or millennia. Technically, each one has a concept of faster-than-light travel, for without that, story-lines would be limited, but the means for doing so differ widely, as do the equipment, ships, weapons, defenses, communications, and computers. Politically, the gap widens, where mankind evolves disparate ways to govern themselves and others. Earth is important....or not. And the introduction of other sentient species gives rise to an incredible imaginative variety.

This book involves all of the above, plus some interesting characters and a plausible plot line. A fair amount of space war for us military freaks. My only criticism is that Rex Wahl is more interesting before he becomes Dudley Do-Right and becomes overly altruistic. I like him better as alone and pissed off at his Commodore than I do as the self-appointed protector of three disparate crewmembers and a baby.

The book is a decent stand-alone, but could handle a sequel.
Read more
Helpful
Comment Report abuse
See all reviews

Steve
4.0 out of 5 stars Book was OK
Reviewed in the United Kingdom on January 26, 2019
Verified Purchase
Was entertaining. I'm not sure I'll buy the next in the series though.
Read more
Report abuse

Kev_mcke
5.0 out of 5 stars A good fast paced space opera
Reviewed in the United Kingdom on November 1, 2016
Verified Purchase
I enjoyed this book. It's not a terribly deep storyline, but it's ok. There's constant action and it's well written. I just bought the follow up book too.
Read more
Report abuse

Kindle Customer
5.0 out of 5 stars Captivating Sci fi thriller
Reviewed in the United Kingdom on March 18, 2016
Verified Purchase
Unusual from the beginning taking various twists and turns into a world that can only live in the imagination, cleverly written with a captivating storyline that makes this a difficult book to put down.
Read more
Report abuse

RobAllan
4.0 out of 5 stars Light space opera
Reviewed in the United Kingdom on September 12, 2013
Verified Purchase
I enjoyed reading this. The plot moves along at a good pace. The main character has a sense of humour and the chaotic nature of the human diaspora leaves plenty of room for all sorts of civilisations. I will definitely read the next book.
Read more
One person found this helpful
Report abuse

Kindle Customer
5.0 out of 5 stars Better than expected
Reviewed in the United Kingdom on December 18, 2016
Verified Purchase
Just transitioning from paper, got this as a freebie. Better than many paid for sci-fi stories I've read over many years. Varied concepts, plentiful action and just the right amount of emotion. Off to find more of David's work.
Read more
Report abuse
See all reviews