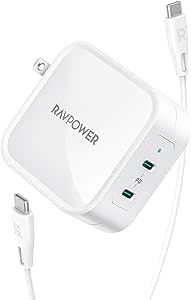 Visit the RAVPower Store
4.7 out of 5 stars 511 ratings
| 28 answered questions
Available at a lower price from other sellers that may not offer free Prime shipping.

RAVPower PD Pioneer, a new era of fast charge technology. Ranging from 18W to 90W, this series optimizes, tailors and delivers the fastest charging speed for your USB-charged devices.

New dimensions of power in a remarkably small size, ready to charge of all your high-power devices. This advanced tech is at your beck and call – getting your laptop battery back to 100% in a short time, perfect for when you’re travelling.

What’s in the Box:


Notes:
1) When charging Apple devices with a third-party certified C-Lightning data cable, charging may be slow. Just re-plug the cable and the charging speed will restore to normal
2) E-mark data cable is a must to reach the maximum output of 90W. The ordinary C-C data cable can only recognize 60W protocol, which will cause slow charging warnings for DELL and LENOVO series notebooks.
3) If you plug a C-lightning data cable to one of the use port even though it doesn’t charge any device, the maximum output of the other port will reduce to 60W
4) Please kindly note that this charger is compatible with Note 10/10+/ Galaxy S20 Ultra, but does not support 25W/45W fast charging as it doesn't have PPS protocol

4.7 out of 5 stars
4.7 out of 5
511 global ratings
How are ratings calculated?
To calculate the overall star rating and percentage breakdown by star, we don’t use a simple average. Instead, our system considers things like how recent a review is and if the reviewer bought the item on Amazon. It also analyzes reviews to verify trustworthiness.

MorganG
5.0 out of 5 stars Five stars, excellent replacement for MacBook Pro Charger
Reviewed in the United States on May 23, 2020
Color: WhiteStyle: 2-Port(90W)Verified Purchase
In my travels, I’ve used many different chargers for my Macbooks and other devices. I’m always looking for the ever-elusive charger that is actually better than the Apple-brand ones, but until now that was very hard to find. Most substitute chargers were either more bulky, operated much too hot, or produced less than desired level of charging power. It was time to see if Ravpower could overcome this issue, so I ordered it up.

This came in a small box, with just the charger, some information, and a USBC cable. I was nicely surprised by the USBC, I hadn’t anticipated that it would come with one.

So it was time to fire it up.

My real test of charging power is to connect a 16” Macbook Pro to an ipad Pro (therefore charging it), and to a USBC dock with a bunch of USB devices, and to see if the charger can keep the battery charging. Until this adapter, the default Apple USBC 87W was the only one that could keep up with all of this. Other chargers would slow down the discharge of the Macbook Pro battery, but that’s it. In addition, some of them would get very hot in the process of not even charging the macbook.

Then I decided to give this one a try. I’ve had reasonable luck with RAVPower products before, so I had hopes that this might live up to the hype.

I’m glad to say that so far, it does. Upon opening it up, the most noticeable thing is that it’s a bit more compact and svelte than Apple’s own charger - plus it has two ports, in case you want to plug another USB C device in. (Though power is shared between them).

I spun up my “nightmare power consumption” scenario, and measured if this could keep up. It maintained the MacBook Pro’s charge, and even increased the charge - although that was very slow. I did not precisely measure it, but subjectively it seemed a bit slower to charge in this situation than the Apple charger. However, the only goal I had was for the MBP to not discharge while plugged into all this stuff, and that goal was definitely accomplished, for the first time apart from the apple charger.

Then the other thing I noticed is that it runs cool. Cooler than Apple’s own charger, and cooler than any third party charger I’ve tried. Perhaps there’s something to this Gallium Arsenide stuff....

Overall I couldn’t be more pleased with this charger. The only very minor quibble is there’s no option for an extended charging cord like on the Apple one. But I’m so happy with this charger, I’m not going to ding them for that.

For me, this is the rare 5-star device. Thanks RAVpower!

Y
5.0 out of 5 stars Really a nice Charger and excellent customer support
Reviewed in the United States on March 22, 2020
Color: WhiteStyle: 2-Port(90W)Verified Purchase
This charger is really nice, I can quick charge my iPhone and MacBook simultaneously: I connected both iPhone 11 and MacBook Pro 15" 2018, it shows 60w on MacBook's system report. After reconnected only with MBP, it shows 90W. From what I've read, the iPhone 11 supports a maximum charging speed of 23W, which makes sense for the result I've got.

Edit Nov 2020: After a few months of use, the USB-C cable came with the charger died suddenly for no reason, it doesn't have any physical damage at all. So I emailed RAVPower's customer support, it only took a few emails' communication then they send a new cable to me. Excellent customer support!

johnvsc
5.0 out of 5 stars A perfect fit!
Reviewed in the United States on June 21, 2020
Color: WhiteStyle: 2-Port(90W)Verified Purchase
As luck would have it - I left my Apple Charger at work the day before we closed our offices in Midtown Manhattan :( I didn't worry because I had a extra Apple 60W and thought that I would be alright. I soon came to realize that with the Slack, Teams, and Skype running - as well as having using my iPad pro as a second screen - the 60 watt couldn't keep up :(

After much searching, I came across this gem : Smaller, lighter, with TWO USB C ports.

I had my reservations as I never heard of RavPower before - but the reviews seemed to be great ... as well as the price. So, I bought one.

Glad I did - this little beast charges my 15" MBP with ease - as well as any peripheral attached to it. I love the cord too (imaging buying a charger and it, OMG, it COMES WITH A CORD‽ ) it is sturdy and formidable ... with a velcro strap too.

Another things I like about it is the LED per light that confirms there is power ... at the source.

ZackC
5.0 out of 5 stars Excellent Charger for 16-inch MacBook Pro
Reviewed in the United States on May 31, 2020
Color: WhiteStyle: 2-Port(90W)Verified Purchase
This charger is significantly smaller, lighter, and less expensive than the charger Apple ships with its MacBook Pro 16-inch models, yet I have never noticed a time when the RAVPower hasn't kept my 16-inch MacBook Pro fully charged. In fact, this charger is even smaller (but a bit thicker) than the 61-watt charger Apple ships with its 13-inch MacBook Pros. And, unlike Apple, RAVPower even includes a USB-C cable, despite being significantly less expensive than Apple's charger. Also, my MacBook Pro tells me that it's receiving exactly the 90 watts promised as long as it's the only device plugged into the charger.

It's so much easier to fit the RAVPower charger in my laptop bag, regardless whether I'm bringing it back and forth to work or on trips. I vastly prefer the RAVPower charger over Apple's and wonder why Apple is charging so much for their charger when it is obviously using inferior technology.

Brad
1.0 out of 5 stars It will try to kill you
Reviewed in the United States on September 1, 2020
Color: WhiteStyle: 2-Port(90W)Verified Purchase
That was fun, very close to electrocuting myself thanks to this poorly made power adapter.
Read more

Nylon
5.0 out of 5 stars Amazingly compact, powerful and versatile.
Reviewed in the United States on May 25, 2020
Color: WhiteStyle: 2-Port(90W)Verified Purchase
It's amazing how small this charger is given that it's 90w. It can simultaneously charge my iPad Pro and iPhone at their maximum fast charge rate. It can also charge my 15" MacBook Pro a little faster than the included charger if its the only item attached to the charger. Essentially this charger enables you to replace all your USB-C chargers that come with your devices with just one. The white colour is a little glossy but I prefer the aesthetic to the black one. Can't go wrong with this. FYI a USB-C cable is included in the charger box, a nice bonus.
Read more
3 people found this helpful
Helpful
Report abuse
See all reviews

Amazon Customer
5.0 out of 5 stars Insanely Fast charger
Reviewed in Canada on January 10, 2021
Color: WhiteStyle: 2-Port(90W)Verified Purchase
this thing charges my macbook air m1 in less than 2hrs, my iphone 11 pro max under 1hr and my nintendo switch very fast as well.

its kinda bulky so wont be suitable for traveling.