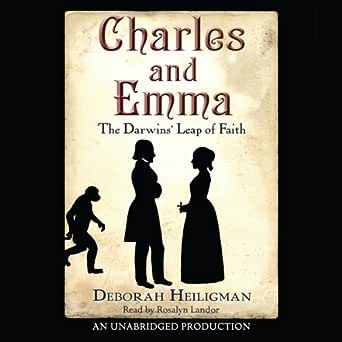 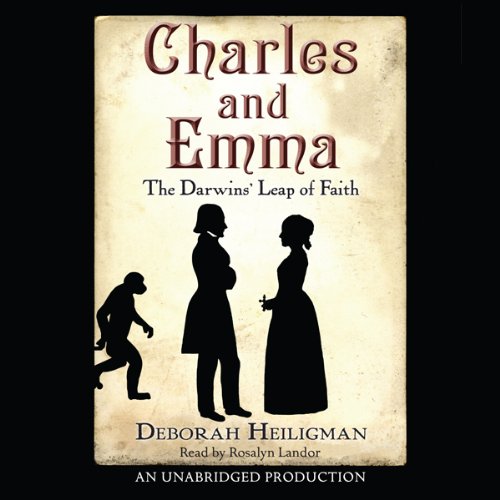 Charles and Emma: The Darwin's Leap of Faith

4.3 out of 5 stars
4.3 out of 5
72 global ratings
How are ratings calculated?
To calculate the overall star rating and percentage breakdown by star, we don’t use a simple average. Instead, our system considers things like how recent a review is and if the reviewer bought the item on Amazon. It also analyzes reviews to verify trustworthiness.
Top reviews

Annette Lamb
5.0 out of 5 stars Outstanding Narrative Nonfiction
Reviewed in the United States on December 4, 2014
Verified Purchase
Charles and Emma: The Darwins' Leap of Faith by Deborah Heiligman is exceptional.

As a fan of science writing, biography, historical settings, and young adult literature, I felt like Charles and Emma was written just for me. The religious issues along with the romantic aspects brought drama to what might have otherwise been a traditional biography. The religious and romantic elements might also move some fiction readers toward nonfiction. Many adult biographies can be academic and dry, so I enjoyed the simple language, conversational style, and topical emphasis of this book written for young adults. I don't normally think of biographies as "page turners," but the story was a really "quick read."

Heiligman wove interesting primary source materials and stories into the book. I particularly enjoyed the "to marry" and "no to marry" list. I could relate to this very analytical approach. I could also connect to his obsession with "knowing everything" about a particular topic such as his species studies.

Combining the stories of Charles and Emma made the book unique. As I read the story I wondered about the impact of spouses on other scientists. I'd like to see other books taking this approach to biography.

So much of YA literature focuses on realistic fiction (teen angst and melodrama) and fantasy (vampires, werewolves, dystopia) that it's great to see a book written for nerdy teens like I was! In publisher's quest for "high profit" books, they often forget that there's a market for engaging biographies, readable nonfiction, and quality storytelling outside traditional fiction categories. This book will never get the readership of the Twilight series, but there are teens in the world that aspire to be naturalists, scientists, and scholars that are thirsty for books like this.

One sign of an exceptional book is the degree to which I think about the book later. Darwin seems to be everywhere I look. Darwin's 200th birthday was Feb 12 2010.

I've always respected Charles Darwin for the many years he spent researching and reflecting on his theories before publishing. He truly wanted to "get it right." His approach to science and the development of arguments is a great example of critical thinking.

There are some great websites devoted to his work. You can also visit Darwin's countryside on Google Earth. For a great overview with images go to http://www.darwinday.org/learn/

I think it's important to introduce biography and Charles Darwin to children. For younger readers, I'd suggest the beautifully illustrated picture book "One Beetle Too Many: The Extraordinary Adventures of Charles Darwin" by Kathryn Lasky as a great introduction to Charles Darwin.

For teens who enjoy this book, I'd recommend moving into quality adult nonfiction such as Erick Larson's The Devil in the White City, Isaac's Storm, or Thunderstruck.

I enjoy reading about naturalists from the 1500s through the 1900s. For an engaging biography that takes place in the late 1600s, read "A Pirate of Exquisite Mind: Explorer, Naturalist, and Buccaneer: The Life of William Dampier" by Diana Preston.

The biographies of Linda Lear would be a great way to introduce young adults scholars to adult literature. Read Beatrix Potter: A Life in Nature or Rachel Carson: Witness for Nature.

Okay, so now you know I'm a nerd. We need more nerds in the world!

Amazon Customer
5.0 out of 5 stars Great for Teaching Science
Reviewed in the United States on July 19, 2016
Verified Purchase
I used this book to teach evolution to my 8th grade science students. You'd be surprised at how capable 8th graders can be of having respectful discussion on this topic! It allows students with or without religious convictions to address their concerns by talking about how Charles Darwin did so. They were also able to think about how to relate to people on both sides of the debate by exploring Charles's respect for his wife Emma (and her support of him despite her disagreements). Our socratic seminar on the themes in this book allowed us to start our unit on evolution with an open mind and with an understanding of (and respect for) different viewpoints.

The author also has a theater version of the book on her website, which was perfect for differentiation for english language learners or reading disabilities.
Read more
6 people found this helpful
Helpful
Comment Report abuse

Dragonflies & Autumn Leaves
5.0 out of 5 stars Lovely Book, Four and a half stars
Reviewed in the United States on September 3, 2009
Verified Purchase
Picked for a book club read, not realizing it was geared toward a younger audience. Several of us really enjoyed it, though we all found the writing style very simple (just right to include the younger audience.) You get to know Darwin as "Charles", a husband and father, a human being in the context of a family; and are charmed and touched by his relationship with them. And the story of how his discoveries effected his beliefs and thus his relationships with those he loved most, keeps you enthralled, especially for people who have experienced the effects of differences in belief in their personal relationships with those they love, who have the context of the full depth of their emotions to draw from when they are only hinted at in the book. It follows the story of his relationship with Emma and family life from it's start to the ends of their lives, and his scientific work in the context of his daily life with his family. Simple and understated, drawing the picture from the historical sources, some in our book club longed for more, and it certainly could have been made more exciting as historical fiction, where you could have gotten inside their heads a bit more, but I find a beauty in the story told as simply as it was. When differences in belief so often spark contention that tears people apart, I found this a beautiful story of triumph of love for our fellow beings, in a striking place: one of the first couples to have felt the impact of the theory of evolution.

I came away with greater respect for Darwin most deeply because of this one thing: his care and respect for the feelings of those whose religious devotion was disturbed by his theories. When after his death, Emma edited out certain passages of his personal writings, which were not intended by him to go public, because she said she thought people would take them the wrong way, at first you may think she is trying to clean up what she doesn't agree with. But I get the feeling from what you learn about the two, that more likely she knew that Charles didn't like offending and hurting people, and was more likely to withhold a thought of his that might be taken as being disrespectful or in mean spirit to others who held contradictory cherished beliefs. Not that he didn't feel justified in his beliefs, but that he would take the utmost care that others would not perceive the slightest mean spirit or disrespect in his intent.

One thing that struck me was how being part of a distinctly upper class, the life Darwin led that enabled him to devote his time to his studies, was surely starkly different than the lives and constraints of those in the working and poorer classes. While this was not a theme brought out at all in the book (appropriately, as this was not the scope of the book), I couldn't help become aware of it while reading the account of what his daily life and home was like.

Seeing Darwin's studies in the context of his home life, and ordinary daily musings and observations of the things around him, can also be a great model for the young scientists among us.
Read more
7 people found this helpful
Helpful
Comment Report abuse
See all reviews

Nathan Sawatzky
5.0 out of 5 stars Highly recommended!
Reviewed in the United Kingdom on May 3, 2019
Verified Purchase
As a Christian, I’ve always been put off by how much Christian schools, and the church in general has demonized Charles Darwin. I decided to purchase this book to add to our homeschooling. I loved this book so much, it’s a great biography that explores the thoughts, ideas, and reactions, Charles Darwin and his family would have to wrestle through. Highly recommended!
Read more
Report abuse

mcewin
5.0 out of 5 stars Charles & Emma, loved & beloved
Reviewed in Canada on February 14, 2010
Verified Purchase
As a long-time Darwin scholar and University evolution prof, I spend a lot of time focussed on Darwin's scientific work: the Voyage, the slow accumulation of facts, the sketches of his theory, the breakthrough Theory of Natural Selection, and the myriad books of the Old Man of Down.

Deborah Heiligman has conceived a delightfully refreshing approach. From letters and diaries, she has constructed a highly readable story of the marriage of Charles Darwin and his wife Emma, paced by the birth of their 10 children, running in parallel with the timeline of events in Charles' day job as a leading scientist of the mid 19th century. Moving back and forth between the two stories is Emma's religious expectation of an afterlife and her concern for Charles' loss of conventional Anglican faith (neither of them being biblical literalists), especially in the aftermath of the death of their favourite daughter Annie.

The very human context of Charles' scientific career as part of the life of a devoted family man has never been presented with greater clarity. I found myself crying again over the death of Annie. The role of religion in the marriage of two very devoted lovers will echo with many.

Those lucky enough to be in the small number of cities where it has been released will want to see "Creation," a film based on the same events in this book, starring Paul Bettany and Jennifer Connelly.
Read more
One person found this helpful
Report abuse