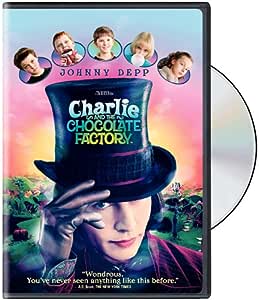 Take an unforgettable, uniquely magical journey through director TimBurton's deliciously delightful, whimsically wonderful world of Charlieand the Chocolate Factory. When eccentric candy man Willy Wonka promisesa lifetime supply of sweets and a tour of his chocolate factory to fivelucky kids, penniless Charlie Bucket seeks the priceless golden ticketthat will make him a winner. Thanks to his Grandpa Joe, Charlie gets theprize of his dreams! But a far more wonderful surprise than Charlie everimagined awaits him. In a land of chocolate waterfalls, giant lollipops,edible flowers and, of course, Oompa Loompas, it's nonstop,mouth-watering fun in the timeless fantasy Charlie and the ChocolateFactory. Based on the children's classic by Roald Dahl.

Mixed reviews and creepy comparisons to Michael Jackson notwithstanding, Tim Burton's splendidly imaginative adaptation of Charlie and the Chocolate Factory would almost surely meet with Roald Dahl's approval. The celebrated author of darkly offbeat children's books vehemently disapproved of 1971's Willy Wonka and the Chocolate Factory (hence the change in title), so it's only fitting that Burton and his frequent star/collaborator, Johnny Depp, should have another go, infusing the enigmatic candyman's tale with their own unique brand of imaginative oddity. Depp's pale, androgynous Wonka led some to suspect a partial riff on that most controversial of eternal children, Michael Jackson, but Burton's film is too expansively magnificent to be so narrowly defined. While preserving Dahl's morality tale on the hazards of indulgent excess, Burton's riotous explosion of color provides a wondrous setting for the lessons learned by Charlie Bucket (played by Freddie Highmore, Depp's delightful costar in Finding Neverland), as he and other, less admirable children enjoy a once-in-a-lifetime tour of Wonka's confectionary wonderland. Elaborate visual effects make this an eye-candy overdose (including digitally multiplied Oompa-Loompas, all played by diminutive actor Deep Roy), and the film's underlying weirdness is exaggerated by Depp's admirably risky but ultimately off-putting performance. Of course, none of this stops Burton's Charlie from being the must-own family DVD of 2005's holiday season, perhaps even for those who staunchly defend Gene Wilder's portrayal of Wonka from 34 years earlier. --Jeff Shannon

4.6 out of 5 stars
4.6 out of 5
4,621 global ratings
How are ratings calculated?
To calculate the overall star rating and percentage breakdown by star, we don’t use a simple average. Instead, our system considers things like how recent a review is and if the reviewer bought the item on Amazon. It also analyzes reviews to verify trustworthiness.

RoboGriffeyTop Contributor: Harry Potter
3.0 out of 5 stars Kids will love it. Adults will hate it and yearn for Gene Wilder
Reviewed in the United States on April 3, 2018
Verified Purchase
Pro's. My nieces absolutely adorred this and watched it 3x during the rental period.

Con's; This is nowhere near as charming, interesting well executed or entertaining as the Gene Wilder original. Johnny Depp comes off incredibly creepy. Like a deranged Michael Jackson during the child abuse allegations. It's awkward and uncomfortable for adults.
Read more
21 people found this helpful
Helpful
Comment Report abuse

T-ZER0
5.0 out of 5 stars The Preferred Dark Chocolate
Reviewed in the United States on March 16, 2020
Verified Purchase
I wanted this movie for a really long time. I grew up with Willy Wonka and the Chocolate Factory, the one with Gene Wilder. I enjoyed this film when I saw it in theaters. When this came on DVD in 2005, I asked if my mother or aunt would buy it for me. They refused because it was too weird for them. They ended up buying Hoodwinked instead.

I guess I understand their reason, they grew up with the 1971 film, my older brother used to watch it on VHS all the time. Now that I can afford to buy the movies I want. This was a must have. I do prefer this film a bit more over the original. No offense, but this one didn’t have a lot of musical numbers that weren’t needed. And Dahl’s family approved this film.

The film comes with a collectible booklet with full color shots and images from the set of the film. Along with a note from the director himself Tim Burton. (I just added that stuff on his face to be funny!) The pictures in the booklet are pretty cool, this set is similar to the Batman 1989 20th Anniversary set, another movie directed by Burton.

The quality of the film is full 1080. Meaning that there’s no black bars when you play it on your HD TV. I like that quality the most, because it proves that you’re not missing anything when you watch it. This will play on a Xbox One or PS4 perfectly whichever one you have. I don’t think it will work well on old Blu-Ray players made in 2011 or older, because those are outdated.

The main menu is like any Warner Bros. menu. That means when you load the disc, there will be no previews, it will play the movie automatically. You’ll have a pop-up menu throughout the movie which gives you options for Languages, Scene Selections and Special Features. If you want to get to the real main menu, you have to wait till the movie is done or skip to the end, like any other WB Blu-Ray. But the downside is like any other WB Blu-Ray, you have to suffer through all those Warnings against piracy in practically every language before you get to the menu. You can skip it, but it’s over 30 languages. It’s gonna take a while.

By the time you get to the main menu. It’s not as impressive as you think. It’s a blue menu with a bunch of options. A basic WB menu.

This is still worth a buy, it’s a great collectors set and if you enjoy the movie as much as I do. Watching this will be like enjoying that sweet, rich, dark chocolate.
Read more

I can't believe Charlie is Freddy Highmore from Bates Motel and The Good Doctor, ha ha... I love that guy. Very talented cast for sure. But overall, it's just a twisted Dr. Seuss style copy with extra helpings of The Grinch. The frames of the Bucket house look like the ghetto in Whoville.

Fun to look at the new colors but no real substance here. I suggest an evening with Frankenweenie for a more original retelling over this wannabe.
Read more
10 people found this helpful
Helpful
Comment Report abuse

Raisuli the Magnificent
3.0 out of 5 stars It's okay, but kind of unnecessary.
Reviewed in the United States on August 14, 2017
Verified Purchase
When remakes are done it's usually because the film needs to be updated for a younger audience. I'm not so sure another version of Raol Dahl's book was necessary, but someone made it anyway. The result is a very stylistic yet tepid film that lacks the poignant bight of the film that starred Wilder.

You can't fault it technically, because it is a very competent production, and the familial message at the end is decent enough, but Johnny Depp is no Gene Wilder, lacking both zingers and energy to deliver them when the miscreant kids misbehave.

I don't know, I guess maybe I'm emotionally attached to the film I saw as a kid, because when Charlie got his golden ticket I and the audience were excited for him. You get some of those same feelings here for this film's Charlie, but the sense of wonderment as you tour the factory is somehow lost. Again, maybe children who see this film will be impacted differently, it is after all a film meant for them.

It's interesting for what it is, but it does seem a bit dark and less inviting than its predecessor. And I think ultimately that's the vibe of the entire film that holds back a better cinematic experience. One can't help but wonder what would happen if you gave 1960s film makers today's technology to improve on or otherwise tweak the original as opposed to attempting a remake.

Make of that what you will.

If you have a kid he might like it, but I think there are better children's films out there.
Read more
4 people found this helpful
Helpful
Comment Report abuse

tm628
5.0 out of 5 stars A Strange But Fun Twist of The Story
Reviewed in the United States on June 27, 2020
Verified Purchase
Johnny Depp plays a more twisted version of Willy Wonka than Gene Wilder played. This film is more like the book and is crazy fun to watch. The Oompa-Loompas are all played by the same actor, and are not the sweet little characters they were in the other film; they have a bit of a mafia look and their music has a hard edge rock sound. I wouldn't recommend this for children under 7 or 8; it may scare them enough to give them nightmares. Willy Wonka's dad is a sadistic dentist and the flashbacks Willy has are a bit disturbing. Johnny Depp's portrayal of Willy Wonka, if nothing else, is worth watching this version.
Read more
One person found this helpful
Helpful
Comment Report abuse
See all reviews

franny bon
2.0 out of 5 stars Two Stars
Reviewed in the United Kingdom on June 7, 2018
Verified Purchase
did not like this film. much preferred the Gene Wilder version
Read more
6 people found this helpful
Report abuse

Claudia
3.0 out of 5 stars Ok film
Reviewed in the United Kingdom on January 1, 2019
Verified Purchase
The film is ok but definitely not as great as the original ‘Willy Wonka and the chocolate factory’ film with Gene Wilder.
Read more
3 people found this helpful
Report abuse

Miss R.
5.0 out of 5 stars Love it
Reviewed in the United Kingdom on August 29, 2020
Verified Purchase
Money well spent. I didn’t how many times we watched this move
Read more
Report abuse