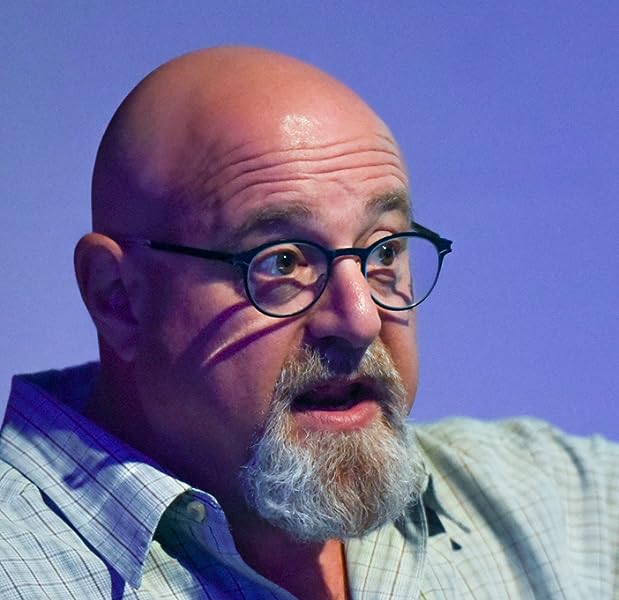 Start reading Charlie Fink's Metaverse - An AR Enabled Guide to AR & VR on your Kindle in under a minute.

4.7 out of 5 stars
4.7 out of 5
64 global ratings
How are ratings calculated?
To calculate the overall star rating and percentage breakdown by star, we don’t use a simple average. Instead, our system considers things like how recent a review is and if the reviewer bought the item on Amazon. It also analyzes reviews to verify trustworthiness.

Jonathan Gennick
5.0 out of 5 stars The big picture that you need to be in the right place to profit from Augmented and Virtual Realities
Reviewed in the United States on March 17, 2018
Verified Purchase
"The killer app is other people." These are the words at the beginning of Charlie Fink's excellent book giving the big picture of augmented and virtual realities and where those technologies are heading. If you are a developer or other interested party and are curious about HoloLens, Oculus Rift, and similar technologes, this book by Charlie and his fellow contributors will help you get the lay of the land. You'll learn the terminolgy, the techniques, the history, and various viewpoints on where things are headed.

I agree with Charlie's view on the killer app. It's about the people. Perhaps it's always been so. Certainly the past two decades in computing technology have been drivin by connecting with "other people". Prodigy, AOL, eMail, Usenet, and social networks like Facebook and Twitter, these are the exploding technologies and products driving us to buy and be glued to our smart phones and laptop screens as we build rich networks of friendships that wouldn't exist without the technology. If it is compelling to stand in a boarding line at an airport and see your children's photos scroll by on Facebook, then how much more it will mean to put on some glasses in your hotel room and be in the moment with your family back home.

That said, some of what's in the book seems a little farfetched. I am not sure how close we are to being able to give and feel a virtual handshake with someone a thousand miles distant. Still, we need the dream. It's these dreams that press us forward and give focus to our efforts to expand what the technology is capable of.

There's so much confusion over terminology due to vendors jockying for mindshare and marketshare. Is Mixed Reality a thing? What makes Mixed different from Augmented? Two of my favorite chapters in the book are the two by Stephanie Llamas and Charlie at the beginning that set straight the terminology and cut through the war of words and confusion from the vendors. I am old enough to have reached Grumpy Old Man status, and I think Charlie is too. You'll appreciate his forthrightness at the end of Chapter 2.

Augmented realty holds a lot of promise. I'm fond of the industrial use cases that are quietly on the increase but aren't yet quite visible to the man on the street. There's a lot happening. It's important to keep up and have the big picture in mind. This book provides that picture, as well as some vision on where you'll want to be standing so that you'll be in the right place when the gold arrives.

michael boland
5.0 out of 5 stars Fink’s Metaverse Triangulates Tech, Society & Business
Reviewed in the United States on March 16, 2018
Verified Purchase
The first thing you may notice about Charlie Fink’s Metaverse is that it truly is meta. Like Cosmo Kramer’s coffee table book about coffee tables that turns into a mini-coffee table, Metaverse is delivered along with the AR medium that it examines.

This is to walk the walk, but also to infuse dynamism in an inherently static medium. In fact, Fink admits in the second page turn that the book is already out of date. This is why few people tackle such a fast-moving topic in book form, he says. So he’ll provide ongoing updates online.

Another thing few people do is achieve meaningful depth on the topic of XR. As Fink rightly points out in the book’s introduction, the majority of XR-related ink is spilled over flowery depictions of world-changing technology with no real technological or cultural barriers worth mentioning.

So Fink sets out in Metaverse to defy that trend with a multi-dimensional look at XR. Just as his AR avatar signals readers at the onset, Fink dives into XR’s drivers and beneficiaries: tech, society and business. These themes map to three points he explicates early in the book.

1. Tech succeeds when it makes what we’re doing better, faster and cheaper.
2. The killer app is other people.
3. We always over-estimate the short term and under-estimate the long term.

Zeroing in on the second point, people and society play a key role in the book. Fink in fact predicts that XR’s biggest killer apps will be social. This extrapolates his prolific view of tech history, such as what Love@AOL showed us as a precursor to social networking and Facebook.

Drilling down further, social collaboration is currently missing from most mobile AR apps, but has the potential to drive immense value, a la network effect. But it first requires better multi-player support, as well as a robust AR cloud, as contributor Ori Inbar examines in one chapter.

As for XR’s business dynamics, Fink again draws from a prolific career spent cross-training in various tech and media sub-sectors. He seeing giants “with huge margins for error” making big XR bets which will continue, including tech’s four horsemen and his former employer, Disney.

Meanwhile, product strategies and business models are starting to materialize, as we examined in our latest report. Fink does justice by level-setting on monetization structures, as does contributor Stephanie Llammas in one chapter. But he admits there’s ample room for surprise and innovation.

“The Internet, in my view, has four killer apps that make it indispensable,” Fink writes. “Email and messaging, e-commerce, search and social media. There are as yet no equivalent applications for VR and AR, though there are early signs of what those could be.”

Other well-devised book components and level setting include early definitions of the XR alphabet soup. Fink boldly treads into contentious territory of defining industry terminology, through his own commentary as well as that of fellow thought leaders and industry-watchers like Llammas.

As for overestimating the short term and underestimating the long term (point 3), this brings up a key theme within the book which is timing. The above draws from a Bill Gates quote while also bringing to mind another Bill: Bill Gross stresses that timing is everything in tech & business.

Fink goes back even further for insights on opportune timing. Beyond tech revolutions, there are historical lessons in other things like gold rushes (the actual kind). There, Fink taps into Enlightenment-Age thinking. Quoting his quote from Voltaire:

“To get rich, discover where gold will be discovered in the future and be there when it arrives.”

This of course requires foresight and a lot of luck — another Bill Gross success factor. But the focus on timing has another hidden message. Because the magic lies in the “when” and “how,” it stands to reason that the question of “if” has an inevitable outcome. We’re with Fink on that.

“As consumer computing shifted from laptops to smartphones, so will telecommunications switch from phones to headsets,” Fink writes in the book’s introduction,” but not as fast or in the way we would like them to.”

Lou
5.0 out of 5 stars Required reading
Reviewed in the United States on September 24, 2018
Verified Purchase
This is required reading for anyone interested in the XR market. It provides a foundational framework for understanding the technologies, applications and market segmentation. It also provides historical and present-day context for understanding how we got here and where we might be going. All this in an enjoyable, easy-to-read (and view) format.
Read more
Helpful
Comment Report abuse

Avinash Mangipudi
5.0 out of 5 stars Must read book of 2018
Reviewed in the United States on November 28, 2018
Verified Purchase
This is a great book that provides insights into the future. The book paints a realistic picture of the near future and makes us aware of the developments that led to it. Overall it's a good read for anyone wishing to venture into the future of technology.
Read more
Helpful
Comment Report abuse

Adam Dubov
5.0 out of 5 stars Highly recommended.
Reviewed in the United States on February 16, 2018
Verified Purchase
A valuable, insightful examination of the past, present and prescient development of the powerful, emerging new mediums of Virtual and Augmented Reality. Charlie Fink occupies a unique perch from which to tell this emerging technology and media story, how it ties together, and what it all means -- having been involved with proto-location-based VR entertainment from before the beginning, back in the roaring 90's. Highly recommended.
Read more
Helpful
Comment Report abuse
See all reviews

Page 1 of 1 Start overPage 1 of 1
This shopping feature will continue to load items when the Enter key is pressed. In order to navigate out of this carousel please use your heading shortcut key to navigate to the next or previous heading.
Back
Next
Pages with related products. See and discover other items: Facebook Books