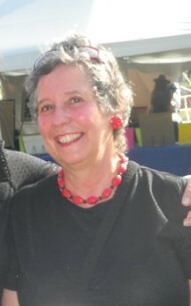 Charlotte G. Morgan's memoir Are You Gregg's Mother? was published by Legacy Book Press (February 2021). Finishing Line Press published her chapbook Time Travel in 2020. Morgan's most recent novel, The Family, pits a naive young woman against those who use religion for personal power and gain. Howard Owen, author of Littlejohn and sixteen other novels, says, "Charlotte Morgan has created a loving portrayal of a troubled young woman's rocky quest for love and belonging. Eileena Clayton will have you cheering for her and wondering what shape her redemption will finally take." Morgan is the author of One August Day, nominated by the Library of Virginia for the Virginia Literary Prize in Fiction. Protecting Elvis is her second novel. Her short fiction has won numerous prizes, including one story published in the prestigious Pushcart Prize Collection. She was awarded a M.F.A. in Creative Writing from Virginia Commonwealth University, where she studied with Paule Marshall, Lee Smith, and Tom DeHaven. For over twenty-five summers she has served as writer-in-residence at Nimrod Hall Summer Artists Workshop, where she has worked with Cathryn Hankla.

Check her out at Charlotte Morgan Author on Facebook.

Or go to charlottemorganwriter.wordpress.com where you can find her blog. 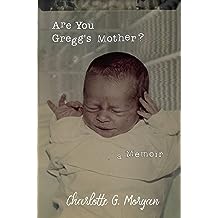 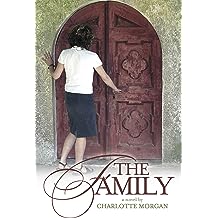 The Family Aug 28, 2019
by Charlotte Morgan
( 12 )
$9.99
Seeking acceptance, Eileena Clayton joins a spiritual community, The Family of the Forgiven. Her own pious family has failed her, so she turns to this one seeking love and a place to belong. As the novel opens, Sister Eileena is punished for her supposed sins of the flesh. The all-male Council––even her fiancé––goes along with the decision to separate her from the community for a period of repentance. Eileena struggles with her sexuality and rocky past. On her return to the group she’s rebellious at times, making enemies, in particular one of the group's founders. A visiting reporter warns Eileena of covert struggles within the group’s leadership. Who can she trust? Death in her birth family calls Eileena home. Secrets she's left behind – and her sister's husband – confront her. Like many young people today, Eileena struggles for identity and self-determination as she searches for a personal belief system. At the heart of the novel's conflict is the question: How does an intelligent person fall sway to cult mentality? Once “called,” is it possible to escape such a powerful, controlling influence?
Read more
Other Formats: Paperback 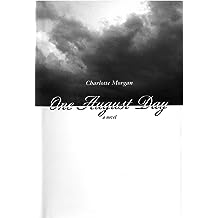 One August Day Aug 26, 2013
by Charlotte G. Morgan
( 4 )
$4.96
From Booklist
What a smart way for an award-winning short story writer to develop her first novel: using poignant fact to ground a flight of the imagination. Morgan, who teaches English at a Virginia community college, builds her tale around the August 1969 floods in the Appalachian foothills: when Hurricane Camille's last gasps collided with local thunderstorms, 25 inches of rain fell on Nelson County, Virginia, in five hours (a world record), leaving 114 people dead and 37 missing. Eight flood victims--men, women, and children, aged 6 to roughly 70--were never identified. One August Day imagines what might have brought those eight to the center of the storm. A browbeaten woman grasps the damage her cruel husband is doing to their three children. A runaway teenager tries to make a place for himself. A teacher heads for a new life with the man she loves. A prison escapee plots biblical revenge. An elderly woman in intermittent contact with reality rules the ancient mansion she hasn't left in years. A vivid and involving story. Mary Carroll --This text refers to the original publication.

From Publishers Weekly
Like Marianne Wiggins (see above), Morgan has set her novel in a Virginia battered by a severe storm. On the night of August 19, 1969, the "tail-end" of Hurricane Camille dumped over 25 inches of rain within five hours on Nelson County. Of the more than 100 people who died in the torrential downpour, eight still remain unidentified. Building on these facts in her sturdy debut, short-story writer Morgan imagines the identities of those eight people, reconstructing the events of the final day of their lives. Helen Jansky impulsively decides she must take her children away from her emotionally abusive husband; elderly, delusional Charlotte is crotchety with her faithful "nigra" maid, Ora; ex-convict Clarence Winston alternates quoting the Bible with fantasies of "baptizing" women in a fashion the church would frown upon; Judy Marsh, burned once in love, prepares to leave town to be with the man of her dreams; and young Daniel Alexander looks for a haven from false criminal accusations and his domineering father. Interweaving her characters' stories in hour by hour segments, Morgan often furnishes background information at the expense of voice and atmosphere. Still, she builds suspense as the hurricane moves closer. Like Thornton Wilder's classic The Bridge of San Luis Rey, the narrative carries a sense of inevitability, and the reader's knowledge that a force of nature will determine the destiny of these people in its path makes the characters' lives more compelling than they otherwise might have been.
Copyright 1998 Reed Business Information, Inc.
Read more
Other Formats: Hardcover , Paperback 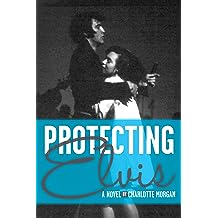 In Protecting Elvis, meet three women whose lives have been inextricably influenced – some might say dominated – by Elvis Presley.

Velis Emerson, agoraphobic, is closed up alone in her home with only memories of her mother and father. She devotes her life to her work as corresponding secretary of the Elvis Presley Tupelo Fan Club. Even those close to her can’t lure her from the house;

Priscilla Jane Johnson, a nurse at the Durham Diet Clinic, cares for Elvis during his brief weight-loss stay. His departing gift of a red Mustang convertible creates a chink in her engagement to Kendall Kennedy, aspiring Gospel songwriter; and

Notary Pettiford Midgette, a domestic at Graceland, needs Elvis’ help to save the life of her only remaining son, the wayward Antwan who’s turned to drugs and the streets of Memphis.

Over all hovers the voice of Gladys Presley, the mother who tries to guard Elvis, even from heaven.

How can each of these women protect the image of Elvis Presley, a man who has meant more in their lives than the ordinary men they know? How does the King of Rock and Roll influence these three vastly different Southerners, and in doing so help them grapple with their own conflicts and achieve their own redemption? And how do they each end up at Graceland on the same day, forever changed because of The King? Find out in Protecting Elvis.
Read more
Other Formats: Paperback