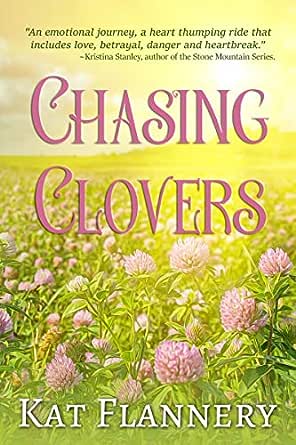 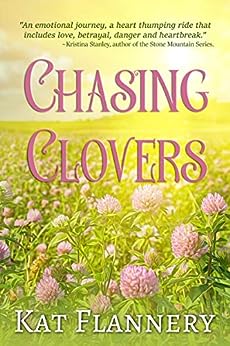 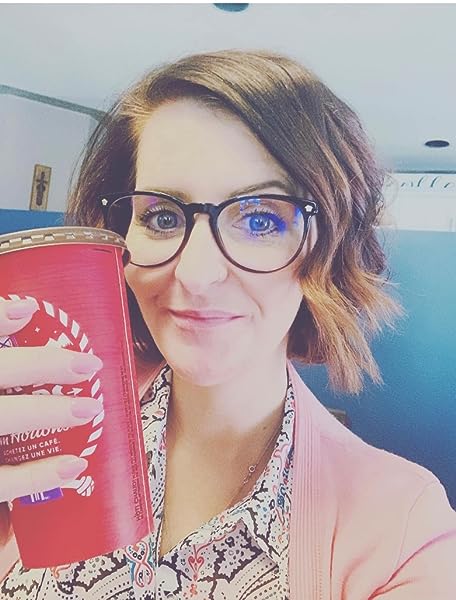 Kat Flannery’s love of history shows in her novels. She is an avid reader of historical, suspense, paranormal, and romance. She has her Certificate in Freelance and Business Writing. A member of the National Romance Writers of America and Paranormal Romance Guild, Kat enjoys teaching writing classes and giving back to other aspiring authors. She also promotes other authors on her blog. She volunteers her time at the local library facilitating their writing group, and has taught writing classes there as well. She’s been published in numerous periodicals throughout her career, and continues to write for blogs and online magazines. Her debut novel CHASING CLOVERS has been an Amazon Top 100 Paid bestseller. LAKOTA HONOR and BLOOD CURSE (Branded Trilogy) are Kat’s two award-winning novels and HAZARDOUS UNIONS is Kat’s first novella. Kat is currently hard at work on her next series, THE MONTGOMERY SISTERS. --This text refers to the paperback edition.

4.1 out of 5 stars
4.1 out of 5
115 global ratings
How are ratings calculated?
To calculate the overall star rating and percentage breakdown by star, we don’t use a simple average. Instead, our system considers things like how recent a review is and if the reviewer bought the item on Amazon. It also analyzes reviews to verify trustworthiness.
Top reviews

I_love_shopping_online
3.0 out of 5 stars Okay....
Reviewed in the United States on September 21, 2016
Verified Purchase
There was too much repeating going on with her being sad and thinking about Grace and thinking about Boyd that fear. I felt like there was much that could have been taken out. I would have liked to have seen growth, more interactions between the Male and female...speaking wise and them falling in love that I could find believable. The author can write but she surely needs real honest beta readers. I felt like I was reading the same chapter over and over. The ending was a quick close of this story..she didn't really allow him to work hard to prove he loved her. I kind of wish he went all alpha and rushed the stage and pulled her off it and out of the building and letting her know she doesn't belong in a place like that ever again and she was worth fighting for. Instead he just sat in the back waiting for her to finish and made his way to the back room and said a few words to get her back not really working hard for her to come back.
Read more
One person found this helpful
Helpful
Comment Report abuse

Rocky Raccoon
3.0 out of 5 stars Decent Historical Redemptive Romance
Reviewed in the United States on July 29, 2012
Verified Purchase
'Chasing Clovers' follows the quest of a single woman during the 19th Century to find love and family while working her way as a torch singer in the saloons of the American West. In the author's postscript, Kat Flannery shares that she took the premise of her novel from "mail order brides," a risky process, which must have often been the betrothal version of a blind date. Surely, following the "Want Ads" for this arrangement often came out with less desirable results, for she (Livy) is a beautiful siren singer, and he (John) is a hulking, handsome owner of a large, prosperous farm in Calgary, Alberta.

The fairy tale element is quickly countered by the strong-willed natures of both players. She has lost a loved one, and his wife died and left him with two young children, a seven-year-old boy (Ben) and a much younger girl (Emma). Besides hurt and resentment, she is coy about her past. While not a harlot, she conceals (among other things) her livelihood in Montana. In the background, the good, the bad, and the truly ugly are in their midst in John's farm staff.

There's much to admire in Flannery's writing and novel. Putting all the elements of historical placement, descriptions of nature, and mostly natural and believable dialogue, Kat makes us care about her characters and their development. 'Chasing Clovers' is eventful enough and paces the plot points judiciously as well. Perhaps the villains aren't as well-rounded as say what you'd find in a Steinbeck novel or in '
Oklahoma! ,' but the main elements are solidly in place.

There are a couple of drawbacks to reading 'Chasing Clovers'. First of all, there is too much repetition. While one understands that emotions like grief and resentment are prevalent in the consciousness of characters and real people alike, the sentiments are repeated so often, they stop being revelations of obsessions and anguish. Secondly, there are a few gaps of credibility. During key times of danger, John goes for a ride on his horse Midnight. Surely there are people watching the fort while he's gone, but it comes off as a convenient plot device and/or leads one to question his judgment. Besides his other flaws, maybe he really is a louse--or just an idiot.

This is the first romance I've read in three decades, since I was assigned ' Pamela, or Virtue Rewarded ' by Samuel Richardson, the English language's first epistolary novel, during college. I'll take this short trek over the excruciatingly scrupulous path of the aforementioned classic. Let's just hope that if Hollywood gets a hold of this book, they'll at least do better than they did for ' Straight From the Heart '.
Read more
9 people found this helpful
Helpful
Comment Report abuse

The Voracious Reader
3.0 out of 5 stars Interesting But Saturated with Profanity
Reviewed in the United States on June 9, 2013
Verified Purchase
Olivia Green definitely needs a change, so when she sees the ad for a mail order bride, she responds. She had been a saloon singer, but she had never become one of the soiled doves, like her dead mother. Yet, one night, a man forced himself on her and she ended up pregnant. She loved her baby girl, but the infant had died of scarlet fever, and Livy was left with grief, guilt, and anxiety attacks.

John doesn't plan to ever love another woman after his first wife dies, but his two little children need a mother, so he advertises for a wife. He has a huge ranch and a large, white, framed house. Livy is not the type of woman he expected. She's pretty but feisty and riddled with a sadness he doesn't understand.

Boyd watches the woman he knew as Angel from afar. He remembered her struggling against his body as he took her against her will. That's how he liked his women. He knows if he bides his time he'll have his chance again, and he can hardly wait.

This story was interesting, although John was too arrogant, macho, and alpha for my tastes. Livy lies about her past, which sets the stage for more problems. There were few mistakes, but "Northwest" is usually a compound word and not "North West." Anyone who believes in God and the Bible, like John, should have been able to tell Livy death came from Adam and Eve's fall, but he couldn't. The big problem with the novel, however, was all the cursing. It was saturated with profanity. There was an average of two or three on every small, kindle, large-print page. They were so over-used they became a distraction. I would have liked the book more without them.
Read more
3 people found this helpful
Helpful
Comment Report abuse

momasn
4.0 out of 5 stars Interesting plot
Reviewed in the United States on July 23, 2017
Verified Purchase
Overall I enjoyed this story and was drawn in to the characters lives. The twists and turns, a couple quite unexpected kept me turning pages. The protagonist is well developed and had me cringing and intrigued. John (make lead) is a likable man and you want him to be happy again. While I liked the Livy, main character, I sometimes found her annoying. The author wants us to see her as strong but I found her quite weak at times and waiting for her to find that strength had me impatient. I also felt that the ending was rather abrupt. Rather than just, okay, everything is fine now I would have liked to have had the conversation (the scene) played out more thoroughly.

There are a couple errors in the book but I never know if this is the author's fault, the editor, or something that occurs in becoming an e-book.
Read more
Helpful
Comment Report abuse
See all reviews

Evelyn Tidman - historical fiction author
5.0 out of 5 stars A love story with a difference
Reviewed in the United Kingdom on March 24, 2013
Verified Purchase
By Evelyn Tidman

I really enjoyed Chasing Clovers, a diferent book to my usual kind of read. If this is Kat Flannery's first novel, I am impressed. It is well-written, and I could visualise everything as it happened, to the point where my heart was thudding as the bad guy came after Livy. The author built the suspense in the obvious danger, and the villain was a thoroughly nasty piece of work! I could feel the pain of both Livy and John with the loss of loved ones, and contrary to another review, I did not feel that John acted out of character when Livy finally disclosed her past to him. People are a mixture of emotions, and I would have been surprised if John had reacted with rational caring in the face of such a cataclysmic disclosure, especially in the era the story was set, when people's moral ideas were more conservative than they are now.
A really enjoyable read, and I look forward to Miss Flannery's next novel.
Read more
Report abuse

M Angell
5.0 out of 5 stars Very good reading
Reviewed in the United Kingdom on May 3, 2012
Verified Purchase
I enoyed reading this book very much, I am a bit of a romaatice but this book was enjoyable to read so much so that I had a bit of a tear in my eye. Glad I downloaded this book.

It was also quite gutsy in the fact the auther didnt make the women weak and mild, she had a lot of character to her as well as the man did.
Read more
Report abuse

MysteryReader
5.0 out of 5 stars An emotional journey you shouldn't miss...
Reviewed in Canada on August 9, 2015
Verified Purchase
Today I should have been working, but instead I read this fabulous book. My intentions were to read for a few minutes while I drank my morning coffee, but that's not what happened. I read the novel in one sitting. Chasing Clovers takes you on an emotional journey, a heart thumping ride that includes love, betrayal, danger and heartbreak.
Read more
Report abuse
See all reviews