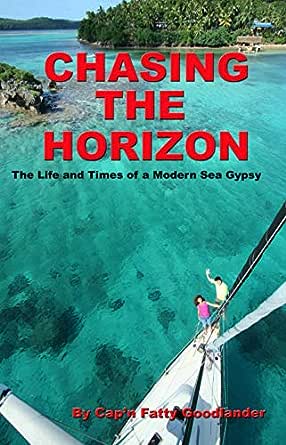 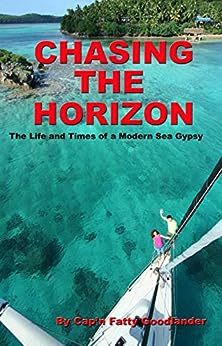 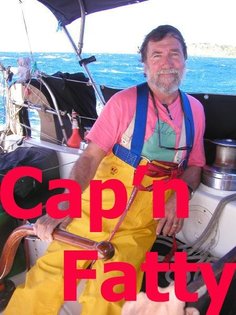 Chasing the Horizon: The Life and Times of Modern Sea Gypsy Kindle Edition

This was my second book. I wrote it in late 1990,
just after having lost my 36 foot ketch Carlotta
in Hurricane Hugo.

I'd like to think in the intervening twenty years
I've become a much better writer. Maybe. Maybe
not. But this is still my favorite book. It is
completely outrageous. I sang a lusty song!

Basically, it is my autobiography.

If you don't laugh aloud a few times while reading
this one--you should go to a doctor. (Maybe you're
dead?) --This text refers to the paperback edition.

Cap'n Fatty Goodlander has lived over 50 years (of 58) aboard various sailing craft--forty of them with his wife Carolyn. Their daughter Roma Orion was a third generation live-aboard before she escaped to Brandeis University. (Their dirty little secret: Roma has become {gasp!} a dirt-dweller.)

He's written numerous books, six of which are currently in print. For 17 years, he produced a WVWI radio show aboard his vessel as he sailed the world. In 2008, he had a series of Sunday summer sailing spots on National Public Radio (NPR).

He currently lives aboard his 38 foot cutter-rigged Wild Card in the Mediterranean Sea and is about to complete his second circumnavigation.

He is also currently an editor-at-large for Cruising World magazine. In addition, he's written a Caribbean marine column for 30+ years--which presently appears in All At Sea.

Next up: a novel, a Caribbean refit, and a third circumnavigation.

His motto: "Kiss life full on the lips. Live while you're alive!"

"He refuses to grow up," confirms his wife Carolyn. "I'm always hoping he'll eventually show some small signs of maturing--but I'm beginning to think I hope in vain." She paused in exasperation, blew a wayward strand of her dark Italian hair upwards in frustration, and wearily said, "The reason we don't have much money is because they pay my husband what he's worth!" --This text refers to the paperback edition.

Harold E. Luse
5.0 out of 5 stars For the Sea Gypsy in all of us.
Reviewed in the United States on January 24, 2017
Verified Purchase
A candid and revealing look at the lifestyle of a sucessful cruiser. Capf'n Fatty is a gifted writer that bares his heart in events alternating between touching and humorous. Anyone contemplating the low-budget cruising lifestyle should read this book.
Read more
Helpful
Comment Report abuse

Ken West
5.0 out of 5 stars Living the Dream
Reviewed in the United States on August 7, 2016
Verified Purchase
Cap'n Fatty masterfully tells the tale of his life as a sea gypsy - from his childhood, through his first days aboard "Wild Card"
The stories he shares and the people "Characters" he encounters along the way make this a real page-turner.
Anyone who has ever considered the life of a live-aboard sailor should read this book.
If you love good stories, get this book.
If you like to laugh at other peoples troubles, get this book.

Cap'n Fatty doesn't sugar-coat the reality of life on a sailboat. There are many trials and tribulations; but the sheer joy of being on the water makes them all worthwhile!

Kel
5.0 out of 5 stars Excellent read!
Reviewed in the United States on April 14, 2016
Verified Purchase
Though the writing can at times be rough, and though the grammar at times is wrong, this is an excellent book to read. Don't let the minor mistakes fool you, Mr. Good lander is a hell of a storyteller. Funny, sad, filled with wonder; Captain Fatty makes a owes I want to immediately cast off the mooring lines of "normal" drudgery to take up the life of a sea gypsy. He has quickly become one of my favorite authors to read.
Read more
Helpful
Comment Report abuse

Chemical Jose
4.0 out of 5 stars Chasing Freedom
Reviewed in the United States on June 20, 2016
Verified Purchase
As fresh as a story told over a lot of drinks at a seaside bar in the Caribbean. Fatty Goodlander proves to be an imaginative storyteller, and an uninhibited rascal, unabashedly sharing his wildest adventures and misfortunes, and leaving us envious of his love of, and quest for freedom and independence.
Read more
2 people found this helpful
Helpful
Comment Report abuse

TGSpeedy
5.0 out of 5 stars Great read!
Reviewed in the United States on March 5, 2013
Verified Purchase
I am now an avid reader of fatty's books he captures your attention with real life experience and a lust for life that is hard to equal in today's world. I only wish I could have read this when I was a teenager and not at 50 because I would have bought a boat and started sailing with him! I do own a Catalina 22 made in 1972 and have been sailing for many years on the wonderful Chesapeake bay but nothing compared to what Fatty is doing he was truly blessed from the moment he was born! from his books and online I feel like part of the Fatty family, Thanks, Fatty :)
Read more
Helpful
Comment Report abuse

Mike
5.0 out of 5 stars Buy Capt'n Fatty books to learn and be entertained!
Reviewed in the United States on August 3, 2017
Verified Purchase
There are ery few nautical writers as entertaining as Capt'n Fatty. His real life stories are so entertaining they border on fiction — but i want more and more My only regret is that they haven’t made a movie out about his life and book wasn’t a couple inches thicker. I cannot wait to read other books he has written that I have not already.
Read more
Helpful
Comment Report abuse

P Spencer Norby
5.0 out of 5 stars Real boating life
Reviewed in the United States on October 28, 2018
Verified Purchase
If you wonder, this is your answer!

I’d rather not fill the ethers of time and space with unnecessary words.

Hans J. Varfjell
5.0 out of 5 stars I love it.
Reviewed in the United States on September 15, 2014
Verified Purchase
Fatty can spin a yarn as well as the best of them. I should know. I grew up in a small fishing willage far up north, where the art of storytelling was held in high regard and I was privileged to listen to some of the masters. With that background it's also easy to relate to his stories, both those of humor and those of loss and grief. Fatty masters them all. I love the sea, in spite of it's indifference towards us, i love sailing, i love to laugh, being from light humor or the dark, i love a storyteller that grabs my heart and takes me on a journey. Even if I sometimes end up with a lump in my throat and tears in my eyes. Fatty has all that. What's not to like?

J. Browne
5.0 out of 5 stars Great
Reviewed in the United Kingdom on January 21, 2014
Verified Purchase
Just a great read. If you're thinking of going its interesting . Funny, enlightening and exciting. Like the rest of Fatty's books
Read more
Report abuse

Heidi_slave
4.0 out of 5 stars What a Character!
Reviewed in Canada on December 4, 2016
Verified Purchase
I read it in one sitting. There is something in Fatty's manic gusto for living that inspires and entertains. I'm not sure what I learned from this book, but when confronted with the choice between being "normal" and having fun, I think I'll choose fun more often. Thanks Fatty!
Read more
Report abuse