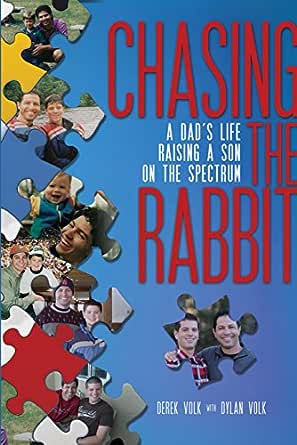 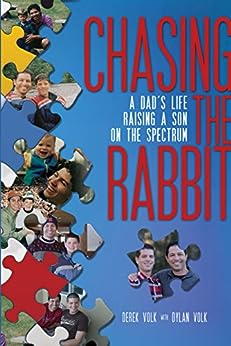 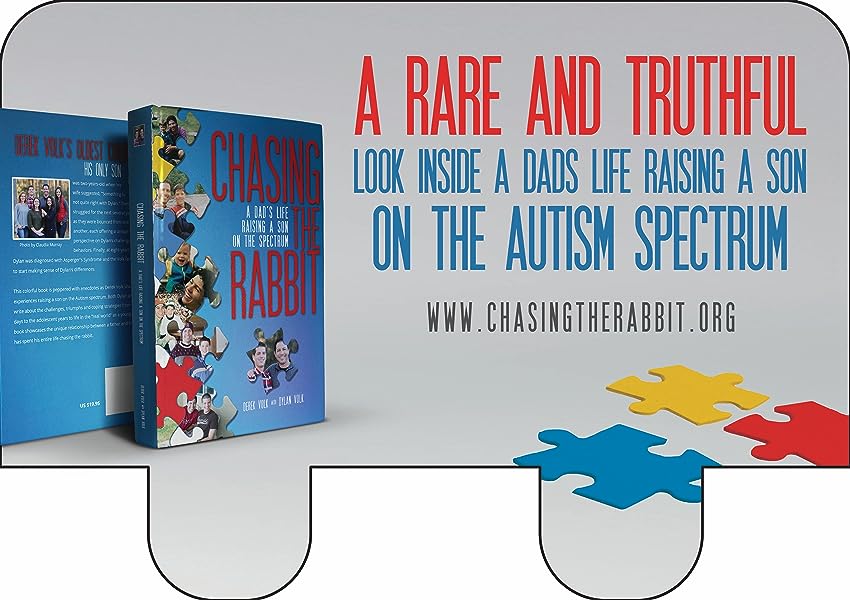 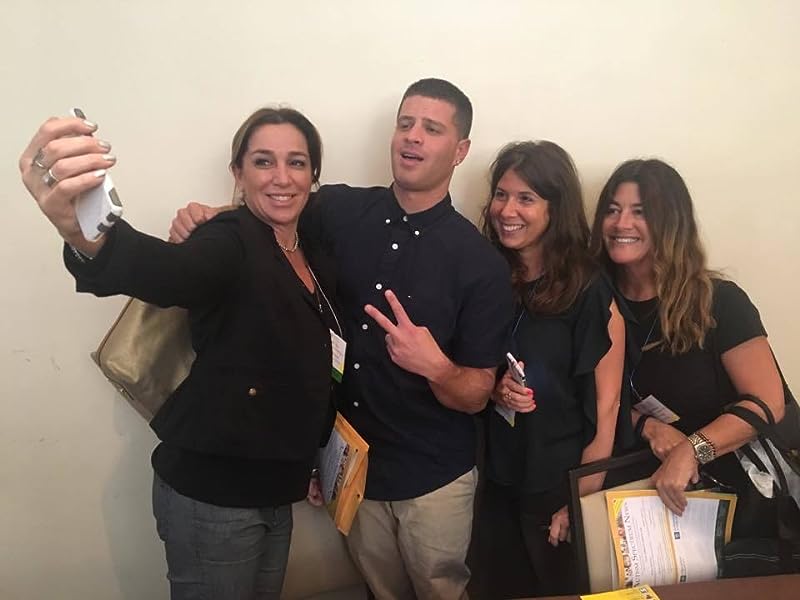 Chasing the Rabbit: A Dad's Life Raising a Son On the Spectrum Kindle Edition

4.9 out of 5 stars
4.9 out of 5
205 customer ratings
How does Amazon calculate star ratings?
Amazon calculates a product’s star ratings based on a machine learned model instead of a raw data average. The model takes into account factors including the age of a rating, whether the ratings are from verified purchasers, and factors that establish reviewer trustworthiness.

Franklin the Mouse
4.0 out of 5 stars What's Up, Docs?
Reviewed in the United States on September 16, 2015
Verified Purchase
There was an initial resistance on my part in reading Mr. Volk's 'Chasing the Rabbit'. Based upon a handful of Maine-produced books I've read in the past, I usually found them to be well-meaning works but the writing was dry. It also didn't help that the author's work was self-published because, I assumed, the thing was not good enough to grab a publisher's attention. I was pleasantly proved wrong.

Speaking as a father who has a son on the spectrum, it was refreshing to read a book from a man's perspective. Quite a few of the Volk family's experiences echoed our own ordeals in dealing with schools, multiple "specialists", and a society that does not understand the demands of raising a child with high-functioning autism. Dylan's characteristics and many exploits are more extreme than our own son's challenges, but I certainly could relate. Just like Mr. Volk, I've lost count how many times I flipped out in dealing with our son especially when he was younger. 'Chasing the Rabbit' is written in a straightforward manner and devoid of colorful prose. However, the story became more and more engaging after a slow start. Each high-functioning person is unique and comes with their own challenges. There were choices Derek and Amy Volk made that my wife and I would have gone in another direction, but like all of us the Volks are flying by the seat of their pants in a State where our options are limited. Our family happens to live in a Maine town abutting their Scarborough community. Many of the locations and some of the practitioners he mentions were familiar to me. The fact that the author names and shows some of them in an unfavorable light sure isn't gonna be doing them any favors.

One thing I found annoying about the author's well done work is their frequent references to God's plan. Heck, the first line in the introduction written by Mr. Volk's wife reads, "The older I become the more I believe that God has a purpose for every life." I'm agnostic. Rolling my eyes at the very beginning of a book usually doesn't bode well. Fortunately, it was not the case with 'Chasing the Rabbit'. Maybe it was because he sprinkles the text with a few F-bombs that kept me interested. I understand how their faith is an important therapeutic tool in coping with life's demands, but magical thinking is not my cup of tea. Also, he does mention in passing their good fortune in having the financial means and a strong marriage in dealing with Dylan, but it can't be stressed enough that many kids fall through the cracks because they are poor and/or living in fractured families. Mr. Volk has written a brutally honest, engaging memoir that is truly worth reading.

Michelle S
5.0 out of 5 stars A great story about an impossibly difficult journey
Reviewed in the United States on June 30, 2015
Verified Purchase
Chasing the Rabbit is a fascinating story about a father's journey as he and his wife raise their son, who has Asperger Syndrome. It is sometimes heartbreaking, sometimes amusing, but always a gripping narrative of real people doing their best and refusing to give up or lose hope in difficult situations. We are accustomed to people presenting themselves and their families in positive, glowing terms, but Derek openly writes about the struggles he had with his son and with himself. To call it deeply personal is an understatement. I was particularly struck with Derek's courageous admittance of his own emotions and behaviors that he is not proud of, but is now sharing to help educate and support others. As a parent of neurotypical children, it has increased my understanding of the challenges faced by families of kids on the spectrum. I work with some of those children at an art studio and I believe this book will help me to be more empathetic to both the kids and their families. I recommend this book to everyone - families dealing with a disability will find communion and hope, and everyone else will gain some insight into what some of their friends, neighbors, co-workers, and others are coping with.
Read more
8 people found this helpful
Helpful
Comment Report abuse

Corky
5.0 out of 5 stars Reviews of Two Books about Raising Children with Autism that Every Adult Should Read
Reviewed in the United States on January 1, 2017
Verified Purchase
Book Reviews

Chasing the Rabbit:
A Dad’s Life Raising a Son on the Autism Spectrum
by
Derik Volk

Let Me Hear Your Voice:
A Family’s Triumph Over Autism
by
Catherine Maurice

As a Behavior Analyst with considerable experience training parents and care givers with children and adults on the autism spectrum, I highly recommend that everyone read these two books written by parents of children with autism. I can vouch for the stories these parents convey, because I have witnessed most of these states of affairs.

Today, thousands of parents across the United States are struggling to instruct their children on the autism spectrum in positive ways and save peace in their families. Autism is so prevalent today that all people who dream of having children need to be aware of the possibility that they could have a child with this developmental disability.

If you desire to know what raising a child with autism might be like, you will get an extremely honest and comprehensive description of Volk’s reactions during positive and negative experiences with his son. His search for answers for the son’s behavior is a sad take on professionals’ inability to diagnosis the problem or design effective treatment at the time.

I admire Volk’s inclusion of the son’s attitudes toward those admissions, and the son’s own take on the situations. The author’s sincerity would be an important factor in your appreciation of the book.

Volk does not divulge his son’s whole account, as his son’s adult life has just begun; neither does Maurice. However, many years ago Maurice was fortunate to find the effective treatment for her two children on the spectrum; the treatment for which Volk still searches. Maurice’s children grew into normal adults.

I recommend that all people read Maurice’s accounting, as she was the first parent to write about Applied Behavior Analysis (ABA) as the effective treatment for her children. Everyone needs to know that at this time ABA is the only treatment based on research. Unfortunately, it is expensive. Fortunately, many states require insurance to cover ABA and it has become more accessible.

The issues with scientifically effective treatment that improves the life of children with autism are:
• Most parents have limited resources for expensive treatment on their own
• Some medical doctors may not alert parents to symptoms or scientific treatment due to a lack of awareness themselves
• Most parents have little knowledge about funding resources including insurance
• Many parents fail to recognize the symptoms of autism
• Many parents deny the need for treatment until it is late. And since it must be offered very early – as early as possible – it is not as effective as possible
• People continue to use methods that are advertised as effective or useful in some way, with less than dramatic improvement in their child’s life

Please do not perceive treating autism as the singular benefit of ABA. This is the scientific approach to educating or treating normal people and people with cognitive delay, mental illness, social skills deficits, marriage difficulties, among others. When you watch trained whales or dolphins at Animal World you are seeing the effects of ABA.

In addition, I recommend that parents of children on the spectrum regularly read the web site “Association for Science in Autism Treatment” [...]
Read more
One person found this helpful
Helpful
Comment Report abuse
See all reviews from the United States

maxine aston
5.0 out of 5 stars Well worth reading - unique and realistic
Reviewed in the United Kingdom on July 14, 2015
Verified Purchase
I have worked with families affected by Asperger Syndrome for over seventeen years and have shared both the joys and the struggles faced by parents wanting only to do their best for their children. I was delighted with this book. It is unique, readable, engaging and tells it just as it is! This book is not just for parents, grandparents and siblings, but should be read by any professional who wants to increase their understanding of just what it means to have a child on the Spectrum.
Derek Volk is a very special father, who gives a voice to all fathers trying their hardest to give their children the best possible chance in life they can.
Read more
Helpful
Sending feedback...
Thank you for your feedback.
Sorry, we failed to record your vote. Please try again
Report abuse