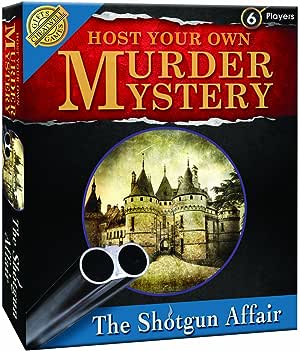 Host a dinner party with a difference! The place: Lord Shippe's country mansion, the ancient retreat of the Gottalotta-Dosh family. The Victim: Lord Shippe, the Master of the House. The Scene: A quiet evening with friends is shattered when his Lordship is fatally wounded. The Crime: Somebody was lying in wait in the gunroom... the first person to enter was met by the blast of a 12-bore... BANG! Was Lord Shippe the intended victim? Had the resident mystic, Claire Voyant, foreseen his end? Had Parson Snows picked him off? Or was it an elaborate case of suicide? You must find out!

4.0 out of 5 stars
4 out of 5
10 global ratings
How are ratings calculated?
To calculate the overall star rating and percentage breakdown by star, we don’t use a simple average. Instead, our system considers things like how recent a review is and if the reviewer bought the item on Amazon. It also analyzes reviews to verify trustworthiness.
Top reviews

dhdjms
4.0 out of 5 stars good game
Reviewed in the United States on May 7, 2018
Verified Purchase
somewhat more confusing than some other MM games. But we all had fun.
Read more
Helpful
Comment Report abuse

Dennis A. Pascale
3.0 out of 5 stars Fun Scenario, But a tad Complex and Very Scripted!
Reviewed in the United States on September 24, 2014
This one is hard to rate. I really enjoyed the plot and the characters. "The Shotgun Affair" is another Cheatwell Murder Mystery party, which uses a CD as the framework for the game. The two downsides to the game is that the party is very scripted, and the solution is somewhat complex. It is then made all the more challenging because the booklets do not let the guilty party know that they are guilty. Thus, your guests must keep in mind that everything they are told to read aloud, (as well as everything they are keeping secret), may all be a lie. The plot takes places at the Gottalotta-Dosh country mansion of Lord Shippe. Lord Shippe has recently been killed in a tragic shooting accident. The six guests have been invited to the party to hear Lord Shippe's Last Will & Testament. Of course, it is soon revealed that Lord Shippe's death was no accident, but murder! A classic scenario. The suspects include Lady Shippe, (the grieving widow), Major Windbag, (the retired army colonel and the Lord's best friend), Slaughter the surly gamekeeper, Frau Pumpernickel, the German cook, Claire Voyant, the spiritual medium and faith healer, who has been a house guest at the mansion for quite a while and Parson Snows, the genteel clergyman of the village. As you can see, a tried and true, classic scenario. Besides the amusing names, the characters have some funny scripts and some of their secrets are a bit outrageous, but fun. As I stated early, the party is scripted. The CD has an introduction to set the scene. Then each guest introduces themselves (with a set script), followed by secret information that they must keep to themselves. Then each CD track is actually the recording of Lord Shippe himself, as he reads his will. In each round, two of the six suspects are given their inheritance, (along with Lord Shippe's snide comments about them) and then for that round, each of the other four guests have information about the two suspects mentioned. The two suspects are given some facts to counter the accusations made for that round, (which are scripted) but for the most part, the game lets them reveal as much or as little of their background and secrets as they wish. This is the one part that makes the game a little less scripted, but first time players may be confused on how to proceed. Each round, Lord Shippe names two more heirs, gives them their inheritance and adds a few more choice tidbits, and the round then proceeds like the first with the two named suspects defending themselves against the other four. After 3 rounds, all six suspects have then said their piece. The last round, each suspect is given a summary of facts they have learned and/or revealed during the game and the group is given a chance to hold a last "free form" discussion about the facts. After which the guests give their guesses as to who committed the crime, why and how was it done. When ready, the last track of the CD is played in which a narrator explains the solution to the mystery. Though a bit complex, the solution is pretty fair play and there seems to be enough clues in the game to work out the solution, but the way the game is written and structured, it might not be that easy for some. You also get postcards with each suspects old time photo on the front and a bit about the party and their role as well. You also get a host guide which explains the rules pretty straight-forward, and a few recipes you can use for the evening meal if you prefer. The recipes are also on a separate card so you can use it while cooking. You also get lapel pins to use as name tags and place cards to use at the table. There are no other secret clues or other physical evidence that some other boxed games usually have. All in all, a fun, classic mystery at an English country mansion with the usual suspects. Very light in tone and a lot of fun. However, it is very scripted, and at times the way it is written can be a bit confusing for the players. Finally, a complex solution that can be solved, but probably only for die-hard mystery players.
Read more
9 people found this helpful
Helpful
Comment Report abuse
See all reviews

Lisa
3.0 out of 5 stars Three Stars
Reviewed in the United Kingdom on January 3, 2017
Verified Purchase
Cute, not impressive though
Read more
Report abuse

lindyloo
4.0 out of 5 stars murder mystery
Reviewed in the United Kingdom on November 22, 2010
Verified Purchase
Played the murder mystery at the weekend with 6 of my friends. What a laugh! Glad I did not take part as such just played the part of host and kept everyone on track. Think it would have been hard going to play a part and also dish up the dinner etc along the way. Thoroughly enjoyed it though and the girls that were here (3 of them had to play men) said they have never laughed so much for a long time. They all got into the characters and the wine which I think you have to do to make it work.
Read more
One person found this helpful
Report abuse
See all reviews
Pages with related products. See and discover other items: Best murder mystery games for adults