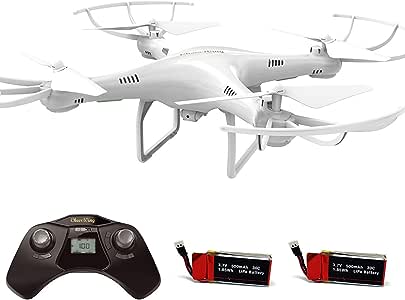 HD 720P Camera Equipped with 2MP (720P) HD camera to take aerial photos and videos while flying! Bring a new perspective to your photos and videos from the air. It also come with 4GB Micro SD Car done Key Take Off / Landing Allow beginner to easy to fly the drone without any skill. One Key Take Off: The drone will hover at certain altitude automatically after taking off. One Key Landing: The drone will fly down slowly and land on the ground automatically before the motors stopping. One Key Landing function is most important to protect the drone when it is out of control or low battery power. Hover / Altitude Hold Mode After using the left joystick (Accelerator) to control the ascending / descending flight of the aircraft. free up the left joystick (Accelerator) and the aircraft will still hover at that height at which the joystick is freed. Headless mode Headless mode makes easier flight. Once the fuselage direction can not be recognized, it can enter headless mode so as to continue the flight.360° Eversion Do incredible 360° flips and rolls with just the push of a button! Specifications: * Dimensions: 36 x 35.6 x 10.8 cm * Aircraft Weight: 120g / 0.26lbs (no need to register with FAA) * Camera: 2MP 720P * Max Flight Time: 6-8 minutes * Charging Time: Approx. 60mins * Control distance: 50 meters * Battery for quadcopter: 3.7V 500mAh Li-Po battery * Battery for controller: 4 "AAA" batteries required (not included)Package Included: 1* CW4 Quadcopter 1* 2.4Ghz Controller 2* 500mAh Lip Batteries 1* USB Battery Charger 1* 4GB Micro-SD Card 1* Card Reader 4* Spare Propellers 1* User Manual For More Spare Parts, please check the ASIN below: Propellers: B01LW0LC7B Motor: B01LWIFBRG Battery: B01MAY4L9Z Quick-wear Parts Set: B01M8JTKI0

4.0 out of 5 stars
4 out of 5
1,118 global ratings
How are ratings calculated?
To calculate the overall star rating and percentage breakdown by star, we don’t use a simple average. Instead, our system considers things like how recent a review is and if the reviewer bought the item on Amazon. It also analyzes reviews to verify trustworthiness.

Phyllis H
5.0 out of 5 stars It flew away
Reviewed in the United States on December 28, 2016
Verified Purchase
Second time used it kept flying up and would not respond to the controller. We tried everything but the unit did not respond to the controller. It just kept rising higher and higher until it was a dot in the air. It Must have been defective but since the drone is nowhere to be found, I can't prove it. A very expensive experience.

Update:This company contacted me right away and resolved this issue. Customer service is incredible.

Smith and Wesson
5.0 out of 5 stars And it is easy to fly
Reviewed in the United States on September 17, 2016
Verified Purchase
I'm older than dirt and this was my first quadcopter,. I selected the CW4 because it had a lot of the features found in more expensive drones and I figured these features would make it easier to learn to fly. And it is easy to fly, stable and very forgiving in flight. My landings are about 50/50 crashes to safe landings, but the Cheerwing has proven to be pretty tough, I'm still on my original props. Everything works as advertised, altitude hold, headless mode and one button landing all add to making this a pleasurable drone to learn with. (I have not tried the camera). I would not fly this quad in winds over 5 mph to start with. It's a gas!
Update after ~40 flights. Still on first set of props, this is a tough quad. Camera is better than I expected. I've had it fly away on a few occasions, try to keep it close to you. Altitude hold makes learning to fly a quad sooo much easier. This is a terrific value.

I recently added two batteries that came with a charger that will recharge 5 batteries at once. The batteries fit in the CW4 and last as long or perhaps a bit longer than the original batteries, a good value. Look here...https://www.amazon.com/gp/product/B00RSWH0K6/ref=oh_aui_detailpage_o01_s00?ie=UTF8&psc=1

Algernon7Top Contributor: Photography
5.0 out of 5 stars Absolute best beginner drone, hands down
Reviewed in the United States on April 17, 2017
Verified Purchase
The CW4 was my first drone and I'm really glad it was, for several reasons:

1. It has altitude hold, which means that you can fly it to a certain height and it will hold that height (more or less). Drones without altitude hold are much harder to fly.

2. It's very sturdy. Face it, you're going to crash your first drone a LOT. I crashed this thing probably 10x every time I'd take it out but it took it like a champ. Even the blades, after many flights, had little more than surface scuffs and scratches on them.

3. The controller will feel familiar to anyone who's played video games in the last 30 years. Many other drones have big bulks controls that are made to look like R/C airplane controllers and they just don't fit the hand as well. The CW4 has a nice medium sized controller that will fit both small and large hands.

4. Flight time is pretty good and wind resistance is okay. Flight time could be better, of course, but with brushed motors this is pretty average. Likewise for a lightweight drone wind is going to be an issue, period, but this one at least has the power to fight it to some extent.

5. Power. For such a cheap drone this thing has enough power to lift and fly a GoPro camera attached to the bottom of it. Now mind you battery life will be cut in half (if not more, so expect 2-4 minute flights) but nevertheless it CAN lift one.

6. Comes with two batteries, many drones only come with one

7. Has a camera, not a great one, but not a totally abysmal one either. It's usable.

Like any product there are some cons. It's far from a perfect drone, but you shouldn't be expecting that for $50. Even at $250 most drones are still fairly cheaply built.

1. Range, it's not abysmal but it's not fantastic either. You won't be hitting 500ft in altitude (nor should you for safety reasons!)

2. Camera takes okay 720p video...but the problem is that it is not a very wide angle at all. It's a 50mm equivalent so provides a fairly narrow field of view. Also, in stock form, it points down at like a 30 degree angle meaning you have to get some altitude to shoot anything. A little tinkering can fix this though, as I did on mine.

1. Remove the blade guards. The provided props are very durable and all they prop guards do is add wind resistance (cut down on flying time) and provide a convenient spot for branches to catch if it goes near a tree.

2. Take apart the little camera and modify the plastic inside to allow the little circuit board to slide forward a few millimeters, this will allow the camera to face forward, making it much more useful.

3. I can not stress this one enough, PAINT THE REAR OF THE COPTER A BRIGHT COLOR! If you can't tell what the front is and what the back is you will have a hard time flying it. I sprayed some red on the rear pylons and landing gear. Made a world of difference in me being able to tell from a distance what my orientation is.
Read more

Michael
5.0 out of 5 stars Great Drone
Reviewed in the United States on September 27, 2017
Verified Purchase
I have it for two weeks now and have flown it over 30 times. For the price, it is absolutely fabulous, I don't know how they do it. Although I've flown RC for 20 years I'm fairly new to drones and have had a few but this one is the easiest to fly without a doubt. The altitude hold is amazing. The camera is as expected and can be a bit jumpy at times but does produce nice photos and videos on windless days. I can get between 7 and 7 1/2 minutes of flight time before the transmitter starts beeping warning that the battery is low. It appears that you have about 30 seconds or less to land before it lands itself which I wouldn't recommend on low battery at high altitude. When you hear the beep, start bringing it back. Another nice feature, which I don't believe is in the instructions, is that the transmitter also beeps if you get out of range. Always fly upwind so that the breeze blows it back towards you if you plan on flying high. Another caveat is to make sure you use headless mode in daylight when flying at higher altitudes because it is very easy to loose orientation up there and you stand a good chance of loosing the drone. Two things I'd like to see is better range and a better angle on the camera, but hey, for the money, you can't go wrong.

11/10/17 Very upstanding seller. Replaced free of charge after I had an issue 5 weeks and dozens of flights later. Customer service doesn't get much better than that! Folks need to keep it reasonably close and if ascending, always go UPWIND so it drifts back towards you. It you climb high downwind, there's a good chance you'll loose it. And don't fly if it's windy!
Read more
40 people found this helpful
Helpful
Comment Report abuse

Orie Gann
5.0 out of 5 stars Replaced no problems!!!
Reviewed in the United States on December 26, 2016
Verified Purchase
It went up and kept going and never came back. Customer service at cheer wing replaced it and no problems.
Read more
54 people found this helpful
Helpful
Comment Report abuse

T. Pariseau
5.0 out of 5 stars Replacement fun to fly!
Reviewed in the United States on February 5, 2018
Verified Purchase
Update 4/13/2018 - Mature brother in law loved getting a drone as a Christmas grab gift. Both he and I found it difficult if not impossible to control, and it ended up wobbling into a bush, destroying one of the motors. Charged twice and didn’t last long enough to master the controls to really enjoy. Not worth the effort to replace the motor.

After posting this review, Cheerwing contacted me and replaced the original drone with a brand new one. This one flies true and was fun to operate. No control issues. Thank you, Cheerwing, for your excellent service.
Read more
33 people found this helpful
Helpful
Comment Report abuse
See all reviews