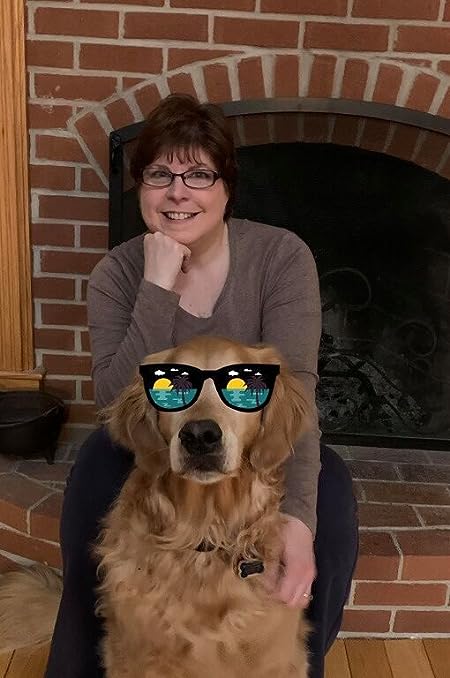 Chele {shell} is a quirky author smitten with romance, comedy, spirituality, and "what ifs." Enjoying the wild ride of writing 'off the cuff,' you'll likely find her nestled in the breakfast nook overlooking a woodsy Massachusetts view with her laptop, golden retriever, and a cup of decaf-- if it's not waiting under the brewer for hours, forgotten as usual.

Growing up a Navy brat took her on an awesome, cultural adventure. In San Diego, during the bicentennial of sixth grade, Chele's mystery booklets won John A. Otis Elementary School's first-ever hobby contest with co-writer and illustrating friend, Debby. A sure sign of the "write" path, her favorite electives were creative writing, journalism, literature, and working on the high school (and college) newspapers, as well as penning many short stories and a teen mystery series, just for fun.

After various careers in health fields, marriage and motherhood, she began accomplishing big writing dreams as she neared the big 5-0. First, by going back to school and earning a writing degree, getting a miraculous hummingbird story published in Guideposts Magazine in 2019 (A miracle in itself!!), and in the middle of it all, living life as a published novelist when her spy romance, Behind Frenemy Lines, debuted in 2017. The spiritual anecdotes of "The Pearly Gates Phone Company" came along in 2018, as well as two book signings at Barnes and Noble in 2019. Since then, six other varied-genre books have followed with more in the works.

When she's not daydreaming about dialogues, mysterious plots, and topsy-turvy realms, Chele's a certified pharmacy technician and a college writing mentor. In her spare time, she decodes cryptograms, loves attending plays, and thinks any day is Taco Tuesday.

Coming soon: several romantic-comedies and the sequel to Behind Frenemy Lines.

Enjoyed any of her characters or scenes or want to share an extraordinary coincidence? Connect with Chele at: 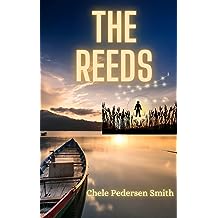 The Reeds Sep 13, 2022
by Chele Pedersen Smith
( 2 )
$1.99
A runaway canoe crashes into a mysterious marsh, leaving Mim and her two teenagers stranded. But what they discover trips them out more...

While Kelsey helps her mom repair the cracked vessel, Rayden wanders off, as if tranced. Something has summoned him into the stalks and he doesn't know why. But when he gets there, he can't believe his eyes, or emotions!

With the canoe repaired, Kelsey catches up to Ray, and the peaceful phenomenon takes her breath away!
Running back to the inlet, Ray tries explaining it all to Mim, but she doesn't quite fall for his tale. Kelsey starts to have doubts too, even though she's her brother's sole witness. Can they convince their mother, and themselves, that what they encountered is real?

What exactly is happening ... in the reeds?
Read more
Other Formats: Paperback 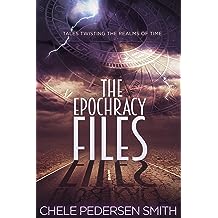 It was just an ordinary day...until it wasn't. With an aura of "The Twilight Zone"-- beware!

Quirky quests, eclectic eras... where will the time-twists take you next?
A gas station time machine, dragons and wizards, Amelia Earhart's secret, a bellhop spy, a spirited tea party, and an asphalt apocalypse are just some of the stops along the way.

Gigi makes a pit stop at a millennial ghost town and brings to life a legion of strange in Gas Station Time Machine. She'll need more than fuel to escape the mayhem alive.

It's the bodacious 80s in Parlor Game where Edison Jones finds himself at a party he'd rather not attend, until he stumbles upon a magical amusement! Will his ego get him in over his head?

Then Rooney, a 1930s bellhop at The Plaza Hotel, is asked to carry a bag that will change his life--and the world forever--in Time Hop.Will he accept the mission?

Eavesdrop on a shocking side-effect of the Roaring Twenties, hit the pavement and maneuver carefully in Asphalt Apocalypse, and heed the talk of the town in Tales from the Hive. Be brave and stand your ground when you encounter an unusual Ear Worm, set out cobweb doilies in Stay for Tea, then meander a wing of Phantom Promises before finding what you're looking for High on a Hill.*

A contemporary yet speculative fiction/light fantasy for teens and adults of all ages. *High on a Hill contributed by Michael R. Young. 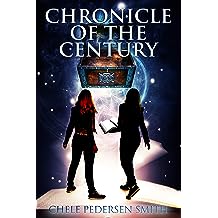 Ghost prom, graveyards, and a delirious diary found in a time capsule pull two best friends into a mystery and place from long ago. But what are the pages trying to say?

Welcome to 2078! Hey, watch out for that loop de loop Lamborghini! There's something peculiar about the future-- more than just their hydrofruit, holla-grams, ear cams, and crazy traffic patterns.

In the combined state of New England, they haven't quite got flying cars off the ground, rain rarely falls and history is taboo, yet a captivating time capsule is unearthed during the last week of school. When Lyr and Innie discover an old diary in the depths, they're soon immersed in a puzzle they're determined to solve, opening a world they never expect!

As the mystery runs deeper, cryptic clues leap off the doodled paper, and the girls begin to realize... the relic isn't just full of adolescent gibberish. Could it possibly hold the key to a paradox bigger than themselves? 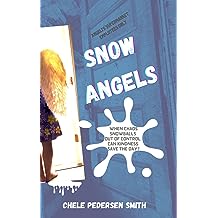 When a blustery snowstorm swirls in, so do angels in disguise...

Chaos, comedy, and clean up in all the aisles! Unusual antics unfold in Angeli's Supermarket, but will kindness swoop in and save the day?

It's a madhouse of shopping shenanigans with quirky customers, exasperated employees, tug-o-wars and tantrums--and that's just from the adults!

In vignettes from vinegar to valentines to overzealous vending machines, lives intertwine in a mid-December rush. In the midst of misunderstandings, secret romance blooms for a few, but will anyone spill the coffee beans in this heartwarming dramedy? 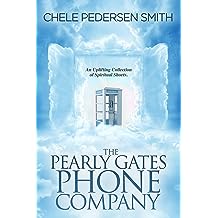 The Pearly Gates Phone Company Oct 1, 2017
by Chele Pedersen Smith, Jeanette Ray Wegemer
( 26 )
$2.99
Is there a lifeline between Heaven and Earth?
The call came from my dad's apartment on a weekday afternoon in 2002. It wouldn't have been remarkable except for the fact he died of liver cancer the month before and his wife had been reluctant to step foot in their apartment ever since. So I answered the phone, expecting to compliment my stepmom on her bravery. What I heard next sent me into emotional vertigo.
Ever been wowed by the wonders of God? Enchanted by an extraordinary experience?Unexplainable encounters, oddly timed answers to prayers, encouraging pick-me-ups, messages from lost loved ones and vivid dreams just when you need them the most.
Written in a relaxed, contemporary style, 33 anecdotal shorts journey through life's great, sad and awkward moments with heart and humor, catching glimpses of God when you least expect it. Perfect to read on the go or anywhere in between. Have you had your mini-miracle today?
Read more
Other Formats: Paperback 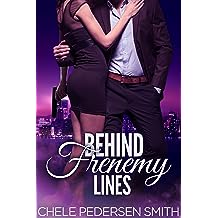 Are they more than spies or enemies with benefits?

When a string of mysterious happenings spook a famous residence, two bantering strangers are thrown together to unravel the whodunit before the clock runs down. But whose side are they really on?

Beautiful, klutzy Galaxy is an agent with dangerous secrets, a shoe addiction, and an unusual arsenal her rivals soon regret. Genuine likable Lee is a chivalrous surveillance specialist with mad skills and skeletons of his own. It's not long before they're smitten---and stepping on last nerves! But should they kiss or wring each other's neck?

While trapped in the walls during an undercover mission, the clandestine couple fight chemistry while their knack of rendezvousing in ridiculous places leads to more clues and calamities. When they uncover a crazy scandal they're forbidden to follow, of course it only ups the game!

But the closer they get to cracking the case, the more twists and turns become steamed with secrets and suspicion as the spies soon find it hard to trust themselves, each other, and their most likely suspect yet.

Do they really have each other's back or will one of them plunge it with a dagger?

A spy romance mystery with a touch of rom-com. 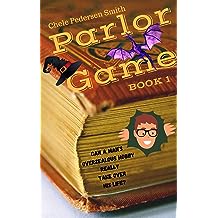 Ed just dissed the greatest wizard-jester ever!
Dragons, wizards, and magical creatures are Edison Jones' favorite escape, but is he in over his head?

Newlywed Ed's life, wife, and TV repair business are going down the tubes. Not that Ed cares--much. It gives him free rein over his beloved pastime! But Eddie better watch out. His only bright spot may soon become his worst enemy.

Then Edison finds himself at a party he'd rather not attend-- until the newest innovative game draws him in! But the stakes are high. Especially when the all-powerful Magno Majesto throws a fiery curveball of a quest. Can Eddie take the heat? 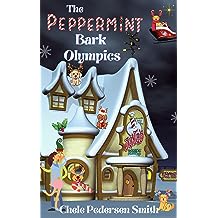 The Peppermint Bark Olympics Sep 26, 2022
by Chele Pedersen Smith
$2.99
Five mischievous golden retrievers help Santa's teens embark on a maze of whimsical wonders. They find oodles of DELIGHTFUL and FRIGHTFUL treasures, but where is the one they're searching for?
It's the week before Christmas and Santa's a bit stressed. He's thinking up brillant presents for a dark world. And if time isn't crunched enough, his teenagers are driving him MOCHA COCOA CRAZY!
And dash it all, his oldest daughter, Candi, is text flirting with Herald, a human elf apprentice! With assembly lines backing up and Candi, Rudy, and Joy busted for bratty behavior, Papa sentences his kids to community service!
But in his plan to increase production, keep his kiddos busy and the lovebirds apart, he forgot one thing. While his nosy youngsters are running amok on elf duty, there's a chance they'll blow the lid off his special operation! Can he keep his grandest gifts under wraps?
Top Secret. Keep Out!
As the teens dabble in the magical departments, the sign on Santa's door intrigues them more! So they set out snooping! Meanwhile, Candi and Herald covertly cross paths of their own. Will this jingle Papa Kringle's ire?
Getting tangled up in extravagant wrapping 101, chasing pups in the Peppermint Bark Olympics, and jumping through the hoopla of other amusing assignments, the Claus kids turn the place upside down-- on the hunt for Santa's big surprise. They unearth layers of other mysterious gifts, but Ho, Ho, Ho... where is Papa hiding his?
A diverse holiday fantasy, mystery, comedy for the whole family.
Read more