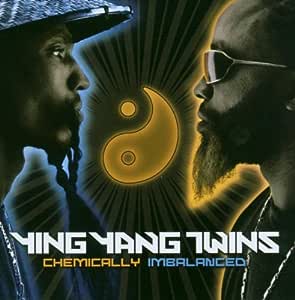 What do "Salt Shaker", "Badd", "Shake" featuring Pitbull, "Wait (The Whisper Song)", "Bedroom Boom" and more have in common? After selling over 2.5 million albums, The Ying Yang Twins have shaken off the novelty rap label and evolved into a massive hit making machine dominating BET, MTV, radio, the internet, magazine covers, you name it. With this year's release of the new single "Dangerous" featuring and produced by Wyclef, their sound has evolved yet again, while still maintaining the Ying Yang infamous party edge. Ying Yang has increased its fan base with each album and this year will be even BIGGER and more comically deranged!!! Or is that "Chemically Imbalanced"?! Hanh!

The Ying Yang Twins leave the yin and the yang behind on their fifth disc in favor of full-on freaky imbalance (the chemical part comes courtesy of themes and song titles like "Smoke Break" and "Patron"). But collaborative disorientation rarely makes so much sense: an "Intro" by executive producer Mr. Collipark alerts fans that the first half of the disc is standard YY--party beats, strip-club dramas, crunky wild-child stuff--while the second half tries a little harder, bringing co-producer Wyclef on board for a reach at lyricism and melody. Whether you shuffle the tracks or play it straight, though, the Twins come across at ease throughout. First single "Dangerous," with Wyclef, takes leave of raunch in favor of a kind of souped-up hip-hop sensuality, and "Jack It Up" jerks listeners back to the ATL with a dose of Lil Jon-style dirtiness. As musical experimentation goes, Imbalanced lacks the cleverness of 2005's USA: United States of Atlanta, but only because it doesn't get much cleverer than that disc's "Wait (The Whisper Song)." Still, if Chemically Imbalanced proves anything, it's that Ying Yang Twins have a lock on innovation. Even when they're out of synch. --Tammy La Gorce

oscar s ramirez
5.0 out of 5 stars nice
Reviewed in the United States on October 17, 2013
Verified Purchase
this cd is a little different then the last 2 cd of theirs but still good music none the less i get down to it
Read more
Helpful
Comment Report abuse

Mr. Paul R. Boggs III
2.0 out of 5 stars Ying Yang Garbage
Reviewed in the United States on February 25, 2009
Verified Purchase
Aviod this CD. What happened to Ying Yang Twins? This is a CD that belongs in the garbage rather than the CD player.
Read more
Helpful
Comment Report abuse

Pablo
3.0 out of 5 stars Surprisingly fresh.
Reviewed in the United States on November 28, 2006
The Ying Yang Twins' U.S.A.(United States of Atlanta) showed that the duo had a genuine interest in experimenting with new techniques in hip-hop. Although it contained more of their trademark crunk-raps than anything else, it still expressed that the Ying Yang Twins weren't the one trick pony some of their contemporaries are. Chemically Imbalanced is another step in that experimental region; more so than on almost any major-label release you'll hear. While the Twins subject matter is still rather inane, and their lyrics are far from substantial, the music on this album nearly reaches an OutKast level of genre-bending.

The first single, Dangerous, is amazingly produced; it's just so smooth that you can't help but love it. A simple, almost minimalistic guitar-rhythm lays the ground for this hypnotizing melody. Though the Twins aren't reaching for the stars lyrically, they definitely don't subtract from the quality of this extremely dope track. With an almost 70s blaxpoitation feel to it, and samples from classic tracks like Maneater(Hall & Oates, not Furtado) and Black Betty, this track feels almost groundbreaking in its complete lack of concern for mainstream standards.

That's not the only dope track on this album, though. The rock-tinged Keep On Comin', the chopped and screwed Jigglin', the loungeroom qualities of Big Boy Liquor, the sure-to-be club anthems of Collared Greens, as well as Water, the sentimental Family, jazzy Friday, or the ivory white tinkling of Leave. There are too many highlights on this album to name, and the Ying Yang Twins have benefitted greatly from their refusal to follow industry trends. Like them or not, the Ying Yang Twins we're doing crunk long before Get Low was the club-banger it was in 2003, and they were dropping Wait(The Whisper Song) before snap became the most radio-dominated sub-genre of hip-hop. The Twins haven't followed trends, they've set them.

The Ying Yang Twins have transcended genre boundaries with this release. If you're a fan of mainstream hip-hop, then you'll definitely love this album; it has more than enough hot beats, and catchy hooks to keep you entertained for awhile. However, if you're a fan of underground hip-hop, you should also appreciate this release; it's good music, plain and simple. The Ying Yang Twins maybe mediocre on the microphone, but their creativity more than makes up for their lack of profound lyricism. It's hard to find a hip-hop album this diverse musically that doesn't have Danger Mouse's stamp on it, and it's nearly impossible to find it in the realm of commercial hip-hop; the Ying Yang Twins couldn't give a ****, though.

A Ying Yang Twins greatest hits from their previous releases couldn't even touch this album; this will be looked at as the definitive Ying Yang Twins LP within years to come. While U.S.A. was a relatively weak effort, it showed the Twins in a transitional period; this is the result. And the result is a shockingly dope album from a pair of rappers I never thought were capable of such ill music. The Twins may not be as responsible for this album's success as the producers, which include the legendary Wyclef Jean and Jerry Wonder, as well as Mr. Collipark, but they still deserve equal credit for making these songs work. Pick this album up; you'll be pleasantly surprised.

William E. Harris
4.0 out of 5 stars Great Party Album
Reviewed in the United States on December 16, 2006
I'll make this short and sweet. If you like the Ying Yang Twins you will love this album. It has a different feel but it is still 100% Ying Yang. The various producers bring a fresh vibe to the proceedings. In a year that has been suprisingly hit and miss for Hip-Hop this set is one of the hits.
Read more
One person found this helpful
Helpful
Comment Report abuse

Kurupt
VINE VOICE
1.0 out of 5 stars exlax in my stomach
Reviewed in the United States on December 1, 2006
Oh there definitley is a balance with the chemistry that is going on in this album. It is the chemistry of a WHOLE box of exlax mixing with my digestive system and the aftermath that arrives in my toilet. This is what occurs when I listen to the lyrics of the ying yang twins. The beats are hot, don't get me wrong. But a song is incomplete when it doesn't have any good lyrics to go with that beat. So that makes an album of incomplete songs because every bar that dribbles off the crusty lips of the ying wack twins are no better than a bar my son can spit. Buy an instrumental of this album and avoid making your eardrums hurt by hearing the lyrics.
Read more
3 people found this helpful
Helpful
Comment Report abuse

M. Nelson
3.0 out of 5 stars maybe a two and a half
Reviewed in the United States on April 21, 2007
only two and a half three bececasue besides a select few songs from like 1 to 10 there just not good, there tryign to do someting else...and then from 11 to whaterver it goes to is pretty good, proably about 80 percent of those songs are good so its a so and so cd but definalty worth picking up if you a fac of ying yang,
Read more
Helpful
Comment Report abuse
See all reviews