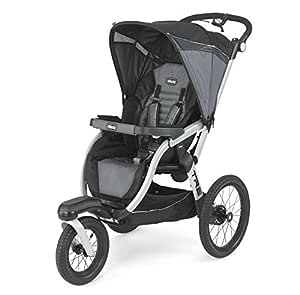 Visit the Chicco Store
4.8 out of 5 stars 236 ratings
| 64 answered questions
Amazon's Choice recommends highly rated and well-priced products.
Amazon's Choice for "chicco tre jogging stroller"
Available at a lower price from other sellers that may not offer free Prime shipping.

The Chicco TRE is designed to keep up with fast-paced families from everyday outings all the way to race day. A lightweight aluminum frame, sleek three-wheel design, deceleration hand brake, and 16" pneumatic rear tires make it easy to maneuver. And dual FlexCore suspension adjusts for smooth or rugged terrain.

For smaller babies, the TRE accepts all KeyFit and Fit2 infant car seats. (car seat sold separately) For added convenience, the stroller seat and backrest detach easily in one piece, along with the canopy, leaving behind a lightweight frame stroller. As baby grows, a five-point harness, multi-position backrest and waterproof fabrics help create a comfortable and secure environment for continued strolling or jogging. A full-coverage canopy with a zippered extension panel and flippable mesh vent/tinted window provides comfortable shade from the sun.

For unmatched convenience, the TRE features an exclusive Control Console with hand-operated functionality that’s easy to access while strolling. The front swivel wheel can be locked/unlocked from the console for on-the-go adjustment. The deceleration brake is also controlled from the console and doubles as a fixed brake for parking. A padded push handle, soft parent tray with two cup holders, and large storage basket provide added convenience.

TRE conveniently folds with one hand into three compact configurations: the standing fold is perfect for the garage; the front swivel wheel easily folds down to create a flat fold for the trunk; and quick-release wheels reduce the footprint for longterm closet storage.

4.8 out of 5 stars
4.8 out of 5
236 global ratings
How are ratings calculated?
To calculate the overall star rating and percentage breakdown by star, we don’t use a simple average. Instead, our system considers things like how recent a review is and if the reviewer bought the item on Amazon. It also analyzes reviews to verify trustworthiness.

Melissa
5.0 out of 5 stars the Chicco Tre had the best build quality of the bunch
Reviewed in the United States on November 6, 2016
Verified Purchase
I've been an avid jogger for the last several years, so a jogging stroller was a must have item after my daughter was born. I spent several days researching the various options available on the market and took a trip to Babies R Us to see some of the strollers in person. Of all of the strollers I tested out, the Chicco Tre had the best build quality of the bunch. It's even nicer than the pricier BOBs in my opinion. It's heavy, but I view that as a good thing. The bearings are solid and the locking mechanism for the front wheel is very sturdy.
It has several features that I really appreciate:
1) It folds up very compactly considering its size. I drive a sedan and it fits in my trunk. The folding mechanism is easy to use and can be operated with one hand.
2) The brake and parking brake are super handy - no worrying about the stroller rolling or picking up too much speed on hills
3) The tires are easy to inflate and hold air well.
4) The parent tray isn't large, but it can fit my phone, keys, and little one's pacifier, which is all I need it to do
5) The suspension is adjustable and works like a charm. Our area is wooded and our driveway unpaved, so I needed a stroller that would take the bumps and not jostle my daughter too much.
6) My Chicco Keyfit 30 car seat snaps in and out very easily.
7) The stroller rolls smoothly and isn't cumbersome to run with. It provided a bit of resistance that I was unaccustomed to, but that's to be expected.

The stroller wasn't difficult to put together, but my husband did spend a good hour getting it dialed in and adjusting the brakes. Probably not really necessary, but he's a mechanic by trade and small details matter to him.

Overall I love it!

JUAN CARLOS HERNANDEZ
5.0 out of 5 stars Best Baby Purchase!!
Reviewed in the United States on July 8, 2019
Verified Purchase
Sturdy, high-quality construction. I absolutely love this stroller. I describe it as a Honda of the joggin strollers. Simply great quality at a fair price compared to the Bob and Thule Urban Glide.

We go on daily walks with our huskys and this stroller is smooth. I removed the seat material so we could use it as a car seat caddy in the first months. The KeyFit 30 car seat clicks in and out very easy. It fits easily in the trunk of my Honda Accord.

You will not regret this purchase,

Kate Sprague
5.0 out of 5 stars tl;dr: worth it. You won't be disappointed.
Reviewed in the United States on February 6, 2020
Verified Purchase
We ordered a damaged box product & got a bit of a discount. I thought my husband was certifiably insane for wanting to spend $400 on a stroller, but I'm completely impressed. Assembly was mostly intuitive, with a few weird spots. I can never seem to do the "one hand opening" which is my only complaint -- and that's a minor one. It is somewhat bulky & heavy, but it's sturdy! Even though I have to launch it into the back of the cars, it takes the licking and keeps on...looking brand new. Wild. My husband has a van, so space is no big deal. I have a Toyota compact SUV with a small hatchback type space & it fits just fine without having to take anything off or do any crazy configurations. The cargo basket is underwhelming, but the standard diaper bag ("Big Lady") fits on it's side. Our smaller backpack style diaper bag slides in. Cargo is surprisingly secure. The cup holder piece at the handlebar is ...eh... OK. It will hold 2 water bottles & keys/phone, but it bounces a lot so coffee in a paper cup with a flimsy lid is not such a great idea. LOVE the sun/weather shade. We took Babe to a holiday festival and it ended up pouring rain & sleet. She stayed dry & could still see things happening in front of her.

I've owned several jogging strollers over the last 20 years & this one is the Big Daddy. We've had it on streets, sidewalks, in parades, in sun, snow, sleet & rain, hiking & flat trails, shopping & running errands, at fairgrounds, state parks, beaches, church and just about everywhere that we can walk. It's a little bulky for inside things (some doors aren't wide enough, but if they are legal for wheelchairs it has no issue there) but it maneuvers like a dream so the size isn't a true issue unless you're stuck in a weird aisle or doorway. Babe loves it so much more than her normal chicco, because she's up higher & can sit straighter.

tl;dr: worth it. You won't be disappointed.

KCinNC
2.0 out of 5 stars Chico vs Bob? Don’t waste your money on the Chico...
Reviewed in the United States on May 30, 2020
Verified Purchase
I’ve had this stroller now for about 2 years. Most of that time it has been our extra stroller so it hasn’t seen much use or wear. Overall I’ve been pretty disappointed with this purchase. Don’t waste your money! Spend the extra $$ for a Bob. I have both this stroller and a Bob and the difference in quality is stark while the difference in price is minimal.

The Chico stroller has an awful breaking mechanism that is weak at best (only breaks one of the back wheels so on a steep incline it spins the stroller) and fails (our break no longer works at all) at worst. It also has a terrible squeak and rubs at times. The Bob on the other hand has a foot break that stops both wheels completely.

Pros: The one nice thing with the Chico stroller is the compatibility with the Chico car seat which is why I got this stroller to begin with. But in hindsight I wish I’d bought the adapter for a Bob. The Chico also has easily adjustable handles and a quick switch from walking to jogging mode on the front wheel. The seat seems comfortable for the rider.

Cons: The parts feel cheap compared to our Bob and the ride is more wobbly especially while jogging. The other annoying thing about this Chico stroller is the folding mechanism. It’s very counterintuitive. You twist a handle away from you and pull towards you at the same time. It’s awkward. It does have an easily adjustable back rest which is nice for sleeping kids but the sun shade leaves a lot to be desired. It’s is much too small and compared to the Bob and even our travel umbrella stroller is laughably inadequate.

Another weird thing is the tire tubes and wheel size. The size of the front wheel and spokes makes it difficult to get a normal bike pump into the space between the rim and the spikes. Just one more reason this is a poorly designed and overpriced product.
Read more
3 people found this helpful
Helpful
Report abuse
See all reviews