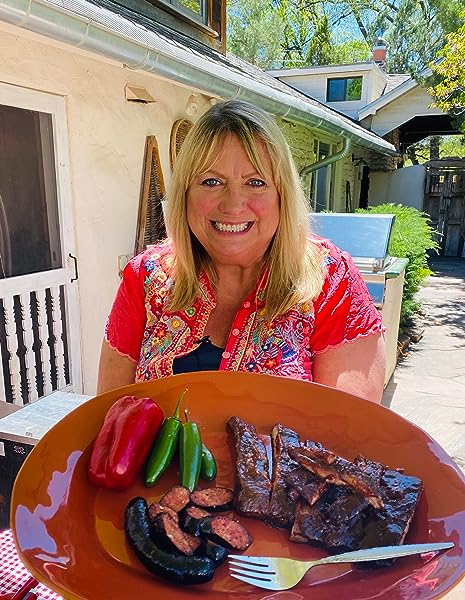 Chicken on the Grill: 100 Surefire Ways to Grill Perfect Chicken Every Time Hardcover – May 4, 2004

Cheryl and Bill Jamison are the authors of more than a dozen cookbooks and travel guides. They appear regularly on television, and are frequent contributors to publications, including Cooking Light and Bon Appétit. They live just outside of Santa Fe, New Mexico.

Start reading Chicken on the Grill on your Kindle in under a minute.

Matt Morgan
TOP 1000 REVIEWERVINE VOICE
5.0 out of 5 stars Very good book on grilling chicken
Reviewed in the United States on June 11, 2008
Verified Purchase
I love to grill, and I am always looking for good books and collections of recipes that will add to my knowledge. When I looked for a book that dealt specifically with chicken, this one caught my eye and I ordered a copy. It has proven to be a valuable asset.

As I write this there is only one other review of this book and it's rather comprehensive. Rather than go through the book formatting, chapter breakdown and what have you (and repeating the other review), I'll hit on why this book works and what makes it worth the purchase.

The book starts off with an excellent discussion of HOW to cook chicken on the grill and why so many of us fail when we try. It is not enough to simply say, "do it this way", so the authors include the "this is why you should do it this way" along with the discussion. The authors worked very hard to impart understanding instead of only straight method, and they have succeeded. The results, when following their guidance, is perfectly grilled chicken that is neither burnt nor undercooked.

The various chapters go into different recipes for the different parts to grill; that is, there is a section on bone-in pieces, boneless chicken breasts, thighs and wings, etc. Everything is ordered logically and is easy to find without too much effort. Also, the full-color pictures add a lot to the overall presentation and make the book fun to browse through.

I always appreciate it when authors write on my level. So many write as if they are addressing children or mensa members. The authors have an approachable writing style that makes their book enjoyable for the average adult.

I like this book and I have gotten much better at grilling chicken as a result. The recipe collection is good, the knowledge shared is invaluable, and the book makes a good read to boot. If you are wanting a good book on grilling chicken, seriously consider this one.

B. Marold
HALL OF FAME
5.0 out of 5 stars Great Intro to Chicken Grilling. Highly Recommended
Reviewed in the United States on June 21, 2004
In considering this book, you should certainly be aware that grilling and barbecue are two different methods of cooking, at least as different as braising and roasting, even though the methods share similar equipment and are typically done outdoors. That means there is very little overlap between the recipes in this book and the Jamison's important barbecue book `Smoke & Spice'. Unlike barbecue, which requires smoke and which is almost always done outside, grilling wishes to avoid smoke, is done on high heat, and can be done fairly competently indoors on a grill pan, as it has a lot more in common with saute than it does with barbecue.
The Jamison's first chapter is one of the best introductions to a cooking method I have seen anywhere. And, you probably need it, as the mind set surrounding grilling, especially outdoors, is not friendly to serious cooking. The lessons may be summarized in the observation that grilling IS cooking on high heat, which is done to impart a unique taste, and this activity requires your full attention.
Chicken is a very popular subject for treatment in a dedicated book; even a book dedicated to a single cooking technique. This is because chicken is cheap, it has some challenging variety (white versus dark versus skin on versus skin off versus young bird versus old bird), it is somewhat bland so it is an excellent medium for enhancing with flavors, and it has been cooked around the world, so every one of the world's great cuisines has a wealth of chicken recipes and flavorings which can be translated to the grill. Even the homegrown American cuisine has contributed major chicken dishes such as fried chicken, barbecued chicken, and Buffalo chicken wings.
The first chapter of recipes owes much to the worlds oldest cuisines and cooking methods. These are `Skewers, Satays, and Other Small Favors'. These are nine recipes of grilling on skewers, especially with a peanut flavoring which defines the Indonesian Satay style of dish. The chapter ends with a `deconstructed' salad of grilled and cubed chicken, needing no skewers.
The next chapter is five recipes for wings with pineapple, mustard, harissa, Tex-Mex, and traditional sauces. The next chapter is seven recipes for grilled chicken in sandwiches, including ground chicken grilled as a hamburger, several Mexican treatments of grilled chicken, and a classic chicken club sandwich.
The chapter on '50 Nifty Recipes for Boneless, Skinless Breasts' is really ten (10) recipes with about five variations in sauce, marinade, or garnish. The star of this chapter is probably the `barbecued chicken pizza'. In this and some other recipes, the term barbecue is used very loosely, as the word is only earned by virtue of dressing the grilled chicken with a barbecue style sauce. That aside, the results are still impressive and delicious. This is getting into the Wolfgang Puck / Bobby Flay cooking with flash territory.
The chapter `Bone-In Breasts, Thighs, and Legs' offers nine recipes with French, Portuguese, Maryland, East Indian, Cajun, and Georgian (US) flavors. This makes me surprised there is no bickering over chicken supremacy between Maryland and Georgia the way there is between North Carolina, Tennessee, Kansas City, and Texas over barbecue.
Just about the only thing left is to grill a whole chicken. Early in the book, the authors point out that grilling and a whole four pound chicken really do not go together very well. That is why every whole chicken method uses either some special equipment, some as humble as a beer can, special butchering, as when the bird is grilled under a brick per the classic Italian technique, or the bird is very small, as with a Poisson or a Cornish game hen. This chapter also contains the only true barbecue recipes in the book, as the barbecue technique is much friendlier to whole chicken cooking than is grilling. This chapter also introduces the rotisserie, which is available on many gas grills. Three rotisserie recipes are provided, two with chickens and one for Cornish game hens.
The last chicken recipe chapter gives seven (7) things to do with grilled chicken in salads and pastas. All are pretty traditional. All look delicious.
The last chapter gives fifteen (15) side dishes and desserts. Again, these are almost all variations on standards, but most of the recipes give you something to do with your grill and vegetables while those Satay skewers are grilling.
If you are a griller, or, if you really like chicken and can swing a grill pan, this book is a great addition to your kitchen. Even if you don't have Marimoto's knife skills or Bobby Flay's flair with squeeze bottled sauces, this book will give you all you need as long as you can light charcoal and maintain a well-controlled heat level under your grill.
Highly recommended. Easy recipes for grillers.
Read more
19 people found this helpful
Helpful
Comment Report abuse
See all reviews