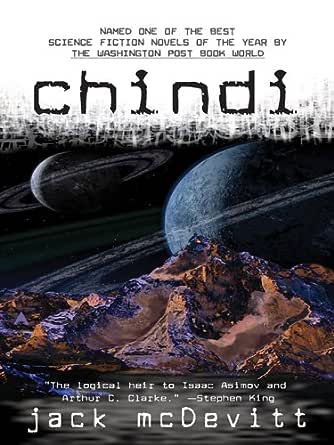 You've subscribed to The Academy series(Priscilla Hutchins) novel! We will preorder your items within 24 hours of when they become available. When new books are released, we'll charge your default payment method for the lowest price available during the pre-order period.
Update your device or payment method, cancel individual pre-orders or your subscription at
Your Memberships & Subscriptions 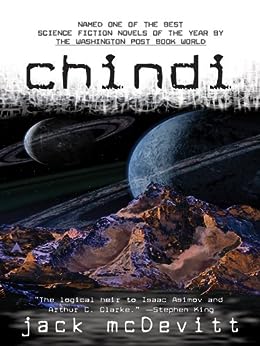 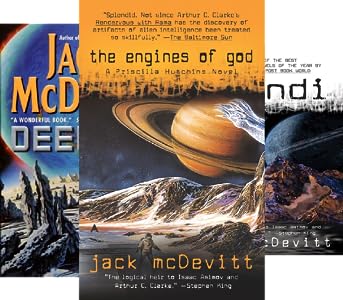 Most science fiction seeks to excite and gratify the reader's sense of wonder. Jack McDevitt's hard SF novel Chindi both satisfies and examines this sense of wonder, which inspires not only SF readers and writers, but every explorer and scientist who seeks to understand the universe.

In Chindi, humanity has expanded to the stars and found very few other intelligent races--all but one extinct, with the survivor none too impressive. Humanity has resigned itself to being alone. Then an alien satellite is found, orbitting a distant star and beaming an unreadable signal across the galaxy. Academy starship Captain Priscilla "Hutch" Hutchins finds herself piloting a motley crew of eccentrics (one an ex-lover) from the idealistic, ridiculed Contact Society, seeking the signal's destination. Their quest turns deadly as it takes them far beyond the borders of explored space to an impossible planetary system--and a vast and terrifying alien artifact.

Chindi is an ambitious, exciting, big-idea hard-SF novel that ventures successfully into Rendezvous with Rama territory, and beyond. The sequel to The Engines of God and Deepsix, Chindi leaves some unanswered questions for McDevitt's forthcoming fourth novel. --Cynthia Ward --This text refers to an alternate kindle_edition edition.

In this sequel to last year's well-received Deepsix, McDevitt tells a curiously old-fashioned tale of interstellar adventure. Reminiscent of Arthur C. Clarke's Rendezvous with Rama, the story sends veteran space pilot Priscilla "Hutch" Hutchins and a crew of rich, amateur SETI enthusiasts off on a star-hopping jaunt in search of the mysterious aliens who have placed a series of "stealthed" satellites around an unknown number of planets. After visiting several worlds, and losing two of her dilettantes to a murderous group of alien angels, Hutch follows the interstellar trail to a bizarre, obviously artificial planetary system. There, two spectacular gas giants orbit each other closely, partially sharing the same atmosphere, while a large moon circles them in a theoretically impossible circumpolar orbit. The explorers soon discover a number of puzzling alien artifacts, including a gigantic spaceship that fails to respond to their signals. First contact is McDevitt's favorite theme, and he's also good at creating large and rather spectacular astronomical phenomena. Where this novel falls short, however, is in the creation of characters. Hutch, beautiful and supremely competent, is an adequate hero, but virtually everyone else is a cartoon. The book abounds in foolhardy dilettantes, glory-hogging bureaucrats and capable space pilots. Oddly, in a novel set some 200 years in the future, McDevitt's cast is almost exclusively white and Anglo-Saxon. This is a serviceable enough space opera, but it operates far from the genre's cutting edge.
Copyright 2002 Reed Business Information, Inc. --This text refers to an alternate kindle_edition edition.

On her final active mission for the Academy, spaceship pilot Priscilla "Hutch" Hutchinson ferries a group of wealthy UFO hobbyists to the site of a mysterious signal from distant space. After discovering only dead planets and unexpected danger, Hutch and her crew of amateurs finally encounter a vehicle that seems to promise a long-awaited first contact. The author of Deepsix relates the further adventures of a resourceful and determined woman who places her duty to those under her care before her personal ambitions. First-rate sf adventure and smooth, well-plotted storytelling make this a superior choice for sf collections.
Copyright 2002 Reed Business Information, Inc. --This text refers to an alternate kindle_edition edition.

McDevitt continues his lovingly detailed exploration of interstellar reconnaissance and alien contact in something of a sequel to Deepsix (2001). After artificial signals are received near a neutron star, starship captain Priscilla Hutchins, heroine of a space rescue, is hired to search for the signals' origins. The motley crew she commands includes a millionaire, a pop entertainer, and a would-be lover--in short, amateurs who will have to make up in chutzpah what they lack in skills. Rediscovering the signals sends them on a trail across the stars, for each signal is relayed from star system to star system by mysterious, sophisticated, and lethal satellites of alien origin. The trail eventually leads to a gigantic alien spaceship--a chindi--that seems to make regular rounds without a live crew, and to a trove of alien artifacts and indications of intelligent alien life that are just out of reach. The last encounter with the chindi, another hairbreadth escape, sets up at least one further book, but on its own this one is really quite splendid. Roland Green
Copyright © American Library Association. All rights reserved --This text refers to an alternate kindle_edition edition.

McDevitt [is]... a writer of hard, humane science fiction thrillers, and Chindi is one of his very best. -- Locus --This text refers to an alternate kindle_edition edition.
Read more

Tim OBriant
4.0 out of 5 stars Good story in the Academy series
Reviewed in the United States on September 12, 2020
Verified Purchase
Priscilla Hutchins gets roped into piloting what seems like a public relations mission and ends up with one of the most important flights of the age. This is worth the read, but...

The Academy Series begins with two great stories -- "The Engines of God" and "Deepsix". This is a very different kind of story and has to be appreciated on a different level. To be honest, it is not my favorite but it is good. McDevitt, as always, writes the characters in a way that we can recognize them, though they are in future. Even though we don't have their technology, we can recognize their needs and desires and relationships. As fo many of his books do, there is science in the fiction but it isn't so much the story. McDevitt will always have a place on my shelves and in my heart.

Clark Hallman
3.0 out of 5 stars A difficult and dangerous journey through several solar systems in search of aliens
Reviewed in the United States on March 14, 2015
Verified Purchase
Chindi by Jack McDevitt – This is the third book in the Priscilla Hutchins (Academy/Engines of God) series by McDevitt. After a mysterious transmission of unknown origin is received by a deep-space interstellar ship. Hutch is hired to take a group of wealthy alien-hunter/enthusiasts into space in search of the aliens that sent the transmission. They encounter more transmissions and they appear to be the real thing. Hutch and her naïve, arrogant and totally unprepared alien hunters undertake a difficult, dangerous and very deadly journey through several solar systems attempting to find the aliens. Unfortunately, it bothered me that Hutch continually allowed her clueless passengers to pursue extremely dangerous actions instead of exercising restraint to keep them safe. It just didn’t seem realistic that she was not more proactive about their safety. In addition, I was disappointed by the results of their search although significant alien artifacts were found. However, McDevitt can write thrilling action and he included enough of it to make this book worthwhile.
Read more
Helpful
Comment Report abuse

J. P. Adams
5.0 out of 5 stars Always a great space adventure!
Reviewed in the United States on June 15, 2018
Verified Purchase
Jack McDevitt never fails to bring a rollicking tale to a roaring conclusion. Chindi is no exception. In the further adventures of Priscilla Hutch Hutchins, McDevitt leads us on a merry chase throughout the galaxy. Five stars, this series is worth the read.
Read more
Helpful
Comment Report abuse

Frank
5.0 out of 5 stars Another good read
Reviewed in the United States on February 4, 2020
Verified Purchase
I like Jack McDevitt writing. Exceptional detail with an intriguing story line. Thought the ending was drawn out a little too much, overall though excellent entertainment.
Read more
Helpful
Comment Report abuse

I do not like to give out story details, as I do not like to read book reviews before I have read a book (too much like spoilers to me), so will not say anything more here.

conmcb25
5.0 out of 5 stars Another great book
Reviewed in the United States on May 9, 2019
Verified Purchase
Another McDevitt book completed. I can’t get enough! I am about to start the next book in the series and am 👀 no forward to it
Read more
Helpful
Comment Report abuse

David & Barbara Allen
4.0 out of 5 stars Good story and interesting concepts presented
Reviewed in the United States on April 16, 2015
Verified Purchase
I liked this story and think that this series has improved with each successive story. It does bother me that the characters get into trouble not by just bad luck but by many very poor decisions. A statement in the book "the Academy ships don't have weapons because a civilization that achieved star flight would be more civilized than constantly looking for war" (not exact quote but the spirit) I thought this was an incredibly naive statement but I suppose one can always hope
Read more
Helpful
Comment Report abuse
See all reviews