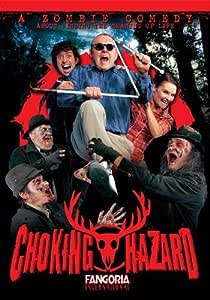 "A comedy Full of Cheeky fun with buckets of raspberry hued gore" Eddie Cockrell, Variety A zombie horror-comedy about finding the meaning of life! A blind philosopher, a shotgun wielding childrens TV show star, a nihilistic hero, and a brain in a plastic bucket have signed up for Professor Reiniss weekend course about discovering the meaning of life. In a forest crawling with undead woodsmen, the trainees learn something about living... and a lot about surviving. Smelling of pine needles, decay and blood, a clan of zombie woodsmen emerge, with their bleeding eyes they hunt the flesh of the living. A favorite in the MIDNIGHT SLOT at the Tribecca Film Fest NYC 2004.

3.0 out of 5 stars
3 out of 5
11 global ratings
How are ratings calculated?
To calculate the overall star rating and percentage breakdown by star, we don’t use a simple average. Instead, our system considers things like how recent a review is and if the reviewer bought the item on Amazon. It also analyzes reviews to verify trustworthiness.
Top reviews

Eddie Whitlock
4.0 out of 5 stars Mmmm... Brains!
Reviewed in the United States on June 25, 2006
Verified Purchase
I'm always on the lookout for a "different" zombie movie. This one certainly fits the bill.

CHOKING HAZARD is a Czech comedy-horror flick with a great rock soundtrack.

The plot is your basic "set of characters surrounded by the living dead." In this case, the living dead are zombie woodsmen. Bear in mind this is a COMEDY-horror. If you want to ask a lot of why's, this isn't the movie for you...

There are several excellent twists:

1. The backdrop is a weekend long "Meaning of Life" philosophy course that includes the making of individual videos.

There are two negatives: Apparently the woman who shows up in the opening and at the conclusion is the children's show host referenced in the plot description on the dvd case. Her cameo appearance must have had some importance to the producers... but not the writers.

The other negative is the fact that the whole thing is in (I think) the Czech language and there are English subtitles. I didn't mind---it's really better than some flicks where the sound quality is so poor you can't hear what is being said--but I think I should have been warned in advance.

All that being said, CHOKING HAZARD is worthy of addition to your Zombie collection.

Rachel Lovinger
5.0 out of 5 stars Great Zombie Comedy!!
Reviewed in the United States on November 17, 2004
Verified Purchase
If you can't get enough of zombie comedies this year, I seriously recommend this one, made in the Czech Republic of all places! I saw it at the Tribeca Film Festival (NY) and it was tremendous fun. Bloody, funny, and smart. An intellectual twist on the "secluded retreat" idea - a group gathers at a hotel to do a weekend course about the meaning of their lives. And of course, they're overrun by zombies.

I especially love the way the film weaves between existential exploration and hilarious gore-fest. It works on so many different levels - while your first reaction to it may be mostly visceral, your attention will soon shift to the clever jokes, the interesting characters, and the joyful way it plays with film conventions.

This is a rare and unusual film to come out of the Czech Republic. I was disappointed that it didn't get a theatrical release in the US, so I'm really glad that it's coming out on DVD. Humor/horror fans will not be disappointed!
Read more
10 people found this helpful
Helpful
Comment Report abuse

kld5150
1.0 out of 5 stars no one said there were subtitles
Reviewed in the United States on September 3, 2011
Verified Purchase
I HATE SUBTITLES,if i wanted to read,i would get a book,so this is a warning for those who are thinkn bout getn this,THERE ARE SUBTITLES!!
Read more
Helpful
Comment Report abuse

Matthew King
4.0 out of 5 stars Pass me that moonshine!
Reviewed in the United States on April 16, 2005
There have been lots of great horror/comedy movies that have combined rednecks, zombies and gore, films like “Dead and Breakfast”, “Shaun of the Dead”, “Redneck Zombies” (Ok maybe that last one was not so great). There’s just something about rednecks in the deep woods swilling bottles of moonshine and soon turning into flesh-eating carnivores that make for a most humorous and entretaining horror experience. “Choking Hazard” is a welcome new entry into this genre, a film out of the Czech Republic that attempts to combine splatter comedy with existential philosophy on the meaning of life. Surprisingly, it actually pulls it off quite well.

A group of city dwellers looking for direction in their lives enroll in a Zen-type course supposed to do just that. When they arrive at the hotel where the course is taught, their eccentric new teacher informs them that he has planned a field trip for them and they soon head off in wilderness and board a cabin deep in the woods. This diverse group of characters, which include a bored couple, a Zen master, a slacker, a couple of nymph princesses and a Jehovah witness porn star (!) soon find themselves at the mercy of zombie woodsmen trying to break into their cabin.

“Choking Hazards” hits home on many levels. Most of us have struggled with this dilemma of finding out our meaning in life, our place and our purpose in society. The Zen teacher’s philosophies were intriguing and provided many chuckles and I found myself in agreement with many of the statements made. That doesn’t mean however that “Choking Hazard’ tries to be some some sort of message film or take itself seriously. In fact, nothing at all about this film is taken seriously. You know you’re watching some sort of exercise in mondo-camp when a pack of zombies start marching to the beat of a rockabilly tune, when some of the said zombies are dressed like Neo from the Matrix and practice kung-fu and finally when said zombies attack women not for the purpose of food, but for the purpose of mating.

As for the red stuff, it is splashed in generous doses of goo that looks like it was taken straight out of a jar of chunky strawberry jam. There’s some really creative gore scenes in here but don’t expect a non-stop splatterfest, this film places a premium on comedy and dialogue while the gore takes a bit of a backseat. Do rent this film if you enjoy comedy/horror hybrids and if you want to see something different within the genre. I mean a Czech horror film with a blasting soundtrack of Czech metal and Czech punk rock? How often do you get the chance to see something like that?
Read more
5 people found this helpful
Helpful
Comment Report abuse
See all reviews

You pays your money and take the... :D
Read more
Report abuse
See all reviews