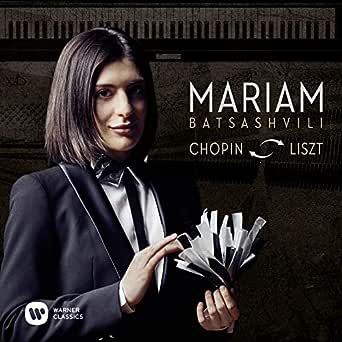 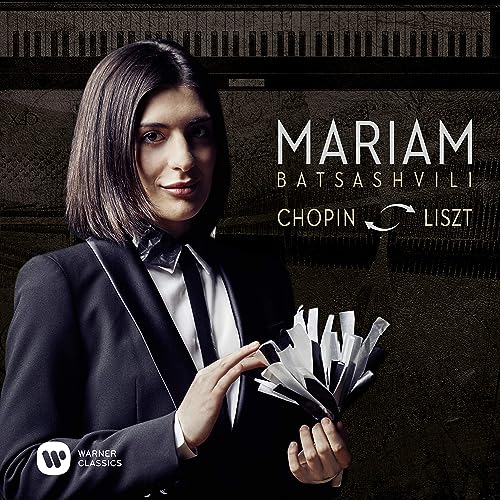 Capt Bob
5.0 out of 5 stars Stupendous, Moving Liszt & Chopin
Reviewed in the United States on November 22, 2019
Verified Purchase
Mariam Batsashvili is a young pianist that deserves watching closely. We saw her here in NY, twice, for her debuts here in 2016: once at the Dimenna Center and once at Hunter College. She has virtuosity to burn but, in addition to her astounding command of technique she always displays a profound understanding of the music, beyond what one would expect from a young up & comer, most of whom seem primarily intent on outshining, out-dazzling the competition. One can hardly imagine a more heartfelt & moving rendition of Liszt's monumental Bénédiction de Dieu dans la solitude. We heard her play it here a few years back and now we are grateful to have her reading on record. Needless to say everything else on the disc - more Liszt & Chopin - is wonderfully well done too; highly recommended all 'round. Brava Mariam! We hope to be seeing more of her here in NY soon.
Read more
One person found this helpful
Helpful
Comment Report abuse

Fanfare Archive
5.0 out of 5 stars Liszt in all his glory
Reviewed in the United States on February 23, 2020
Dave Saemann, Fanfare magazine

It is a measure of the distinction of Mariam Batsashvili’s Liszt and Chopin album that the program note is by the great Liszt pianist Leslie Howard. He characterizes himself as “something of a mentor” to Batsashvili ever since he heard her in a masterclass in 2014. Howard describes Batsashvili as approaching Liszt “with deeply serious intent, eschewing any technical display that was not put into the service of musical expression.” This is an understated evaluation of Batsashvili’s Liszt playing. First of all, there is her sound: luminous and beautifully rounded, with harmonic clarity and tonal body even in the softest passages. It requires great artistry to produce the shimmering pianissimos that characterize Batsashvili’s performances. Then there is her technique itself, displaying exceptional articulation without the slightest feeling of percussiveness. In Batsashvili’s hands the piano sings, although in the big, finger-bruising moments she displays all the bravura one would require. Finally, there is her imagination and empathy. She has chosen for her album a cross-section of Liszt’s output, from the delicate and sensuous to the devilish and wicked. In every case, Batsashvili reveals the composer’s intentions almost serendipitously. Some pianists play Liszt with a greater emphasis on display, but Batsashvili lets you wonder over her accomplishment without ever drawing attention to the marvelous means whereby she achieves her results.
Batsashvili begins with the Bénédiction de Dieu dans la solitude, “a piece,” Howard writes, “that typifies everything that was the best in the man Liszt.” It’s as if Batsashvili wanted to start by showing us the depths of compassion and heart in this composer, before exploring his multifaceted qualities. Her tempos here are beautifully calibrated, and one understands how Liszt’s spirituality encompassed both the serene and the sensuous, a precursor, Howard says, to “the religious works of Messiaen.” In the Six Polish Songs after Chopin, Liszt turns to character pieces, which Batsashvili responds to with both seriousness and wit. “A Maiden’s Wish” almost recalls the playfulness of Shakespeare’s Juliet with her nurse, a wonderful parallel to the musical setting of this in Prokofiev’s Romeo and Juliet. “Spring” evokes the tawniness of growth in this season, while “Bacchanal” is a revel less of drunkenness than exaltation. Batsashvili plays the entire set of Liszt’s Consolations, whose subtitle, “Poetic Thoughts,” informs every aspect of these pieces’ lyrical qualities in her hands. The famous Consolation No. 3 receives a truly distinctive reading, with its gorgeous melody seeming to grow spontaneously from the harmonic richness that surrounds it. If the work is about love, here it seems to express love’s spirituality more than carnality.
The final section of Batsashvili’s CD combines études that Liszt and Chopin dedicated to one another. The three op. 10 Études by Chopin she plays offer a delicious insight into what a complete cycle from Batsashvili might be like. They are cool and collected in their execution, with sounds that flow like oil. Batsashvili plays two of the Grande Éudes that Liszt later would revise into the Transcendental Studies. The AI instantly removes us from Chopin’s exacting world into a realm of luxurious sentiment. And the F-Minor concludes the program with Batsashvili building mansions in the sky. As Leslie Howard writes, its coda “is right on the edge of the possible!” The CD’s sound engineering is wonderfully warm and mellow. We need to hear more from Mariam Batsashvili. This album presents a tantalizing glimpse into what clearly is a major talent. Highly recommended.

Celeste Stokely
3.0 out of 5 stars Batsashvili’s Liszt and Chopin is beautiful, but doesn’t hold one’s attention
Reviewed in the United States on May 7, 2020
Scott Noriega, Fanfare Magazine

Mariam Batsashvili is a talented pianist. She is capable of producing a wealth of colors; she possesses a warm tone; her technique is fierce, easily capable of handling the horrendous difficulties found in the chosen music here; and she has a fine sense of programming, here comparing and contrasting the styles of Liszt, Chopin, and Chopin-Liszt. Her program includes some major works, perhaps the largest being the Liszt Bénédiction. It was a favorite of Richter, Arrau, Bolet, and more recently Hamelin and Hough. While I admire Batsashvili’s accomplishments in this piece, such as her long phrases, her flexibility, and her gorgeous tone, I cannot help but feel something is still missing. Perhaps the closest word I can come up with would be depth—not only an understanding of the music, but a probing of its innermost qualities.

Batsashvili sustains more interest in the smaller pieces which follow. Her Chopin-Liszt song transcriptions are beautifully phrased and lovingly performed, though even here I miss an individual stamp on the music. The trills found in the most popular of the transcriptions, “A Maiden’s Wish,” are carefully executed and well articulated, but where is the quirkiness of the bouncy rhythms and the downward motion of that first beat? The individual musical rhythms are exact, but the musical prose lacks rhythmical unity. The Consolations are the highlight of the program: They are beautifully etched, fluid, almost liquid in quality. While their sound won’t stay with one like Horowitz’s versions, or Feinberg’s, or even Perahia’s, they are still well shaped and a wonder to behold, so gorgeous is her sound. Where the recital disappoints, though, is in its ending: the numerous études which follow. If Batsashvili possesses the equipment to easily toss off this music—and she does!—what she lacks here is a sense of daring, of risk-taking in her playing. And this in two of the most difficult of all Chopin études: op. 10/1 (one which Horowitz always refused to perform in public) and op. 10/4. For a truly dynamic recording of this latter work just witness Richter’s video-recorded performance on Youtube (youtube.com/watch?v=GQ-NAgDpRVs).

Though Batsashvili is accomplished, I still wonder whether it is not better for many artists to record less than they do, to live in and through the music before trying to put it down in so permanent a fashion. With her obvious talent and affinity for this music, I can only marvel at what is possible in the future. I look forward to hearing her in this repertoire in a few years, after she has performed it more and lived in it and breathed more through it. And I mean no offense here: I believe that some of Arrau’s best Liszt came late in his life as well, due to similar circumstances. For now, though her playing is beautiful here, it does not yet capture her at her best.
Read more
Helpful
Comment Report abuse
See all reviews from the United States

H de Fanque
5.0 out of 5 stars She is a wonder....
Reviewed in the United Kingdom on April 14, 2020
Verified Purchase
Having listened to this pianist through the BBC Radio 3 New Generation Artists programme, I have loved her playing technique. I am no aficionado but I know what pleases me and her gentleness, maturity and choice of pieces says something about her ability. The six polish songs are fabulous but to listen (and watch on y tube) her play Chopin's Waterfall is amazing. I saw Vladimir Ashkenazy play this too on y tube and he hammered the left hand and made it look such an effort. Not Mariam. She plays with ease, style and grace and I shall forever look out for her work and hopefully live concerts whenever she plays. A highly recommended version to all who appreciate brilliant artists at work.
Read more
Helpful
Sending feedback...
Thank you for your feedback.
Sorry, we failed to record your vote. Please try again
Report abuse