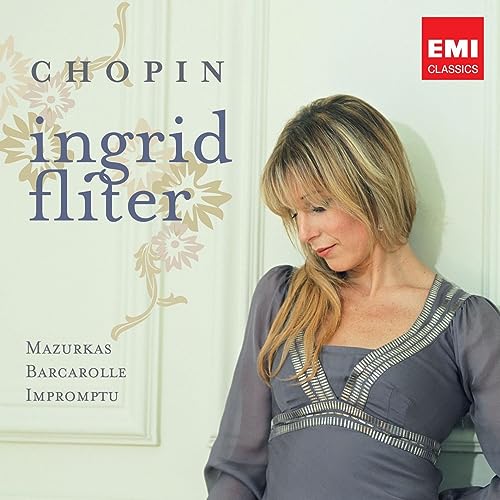 Alex Pushkin
5.0 out of 5 stars Ingrid Fliter's beautiful Chopin.
Reviewed in the United States on February 6, 2010
Verified Purchase
If you like Chopin, you will be delighted to hear Ingrid Fliter's beautiful sound, enchanted, poetic interpretation combined with a precision of touch and masterful performance.
Read more
5 people found this helpful
Helpful
Report abuse

Huntley Dent
HALL OF FAME
4.0 out of 5 stars An award winner plays with style and musicality
Reviewed in the United States on June 11, 2009
Cries of beautiful and wonderful don't help much when judging Fliter, who rose to a privileged echelon among young artists by winning the prestigious Gilmore Award in 2006. Now 35, she owes much of her reputation, on disc at least, to Chopin. However, she plays his music very differently from the volatile, unpredictable Martha Argerich, one of Fliter's prominent supporters. My experience with her in concert is that her sound is fairly small; Fliter is a touch pianist who relies on style and intuitive connection with Chopin's semi-improvisatory idiom. There's a nice balance of charm and intensity; I wish there was a bit more dramatic tension.

This combination of qualities shows up immediately in this CD, where Sonata #3 begins moderately and quickly moves into a quieter, more rhythmically loose style than one hears from, say, Rubinstein or Pollini. There needs to be stronger forward motion, too, but in terms of handling a musical line gracefully, Fliter is admirable. Anyone who likes sensitive pianism without self-indulgence will be pleased. In the Scherzo, which is often played for whirlwind excitement, she's a bit restrained. The Largo finds a nice pace that keeps one's attention, although I don't hear the kind of gripping phrasing that would challenge anyone's idea of great Chopin playing. Perhaps it's the smaller scale of Fliter's approach that makes this movement feel too modest. In other hands the finale thunders and builds with inexorable tension. Fliter takes a middle course, which seems to be her way in general.

The rest of the program offers a scattering from several of Chopin's favorite genres. Of all the Mazurkas, the three of Op. 59 are among the most popular. Here Fliter rises above her sonata reading -- her musical instincts are at home in a smaller form that allows for personal phrasing from bar to bar. She allows herself to free up the 3/4 time kept by the left hand, but not to the point that forward motion is impeded. I heard and like Fliter's way with the Barcarolle in concert, but here it feels a bit undernourished both rhythmically and in terms of overall sound, but her musical instincts keep the music vital, and that's most important.

Next we have the first version of the Fantasie-Impromptu, which brings out the best in Fliter. She handles the sparkling passagework very nicely, and the famous "I'm always chasing rainbows" tune could hardly be more stylish and unaffected at the same time. I favor Kissin's bravura approach to the Grande valse brillante in E flat, but it can be taken down in scale, as Lipatti and Rubinstein do, and so does Fliter. The thrills aren't there, but the style is. The remaining three waltzes are cut from the same cloth, refusing to outright dazzle us while finding enough variety to remain enticing. (I'm being vanilla in my criticism -- frankly, I think the waltz form is where Chopin should sound heady and abandoned.)

The program ends with Ballade no. 4, a masterpiece in the form and a challenge to the pianist's deepest instincts. Kissin and Pollini play this music on a grand scale, closer to the two great sonatas than to the Berceuse or Barcarolle, for example, but that smaller scale is more comfortable for Fliter, and she gives a reading that is even more restrained than Perahia's, to mention a Chopin player who became more restrained with maturity. So the roiling turbulence of the concluding section doesn't rise to tidal wave intensity here, which isn't to say that Fliter lacks command -- one of her strengths is the ability to balance even the loudest chords and rolling fingerwork.

I've gone into some detail because no one else has so far, but also because despite my criticisms, fliter is clearly an important talent and very much worth hearing in this music.
Read more
6 people found this helpful
Helpful
Report abuse

Grady HarpTop Contributor: Children's Books
HALL OF FAMETOP 100 REVIEWER
5.0 out of 5 stars And Ingrid Fliter Continues to Amaze...
Reviewed in the United States on December 25, 2008
In the short two years since this listener had the distinct pleasure of hearing Ingrid Fliter live, replacing her ill mentor Martha Argerich in a concerto with the Los Angeles Philharmonic, this stunning pianist has grown ever more assured and important as one of the pianists deserving of her expanding audience. This CD released this year by EMI Classics may not have many surprises repertoire wise, but hearing Fliter immerse herself in these familiar Chopin works further suggests that her brilliance in technique and in communication stand the test of comparison with the other great Chopin interpreters well indeed.

Not only does Fliter have full control of the entire keyboard always at her willful disposal, but she also acknowledges the fact that these works are romantic and must mold with the overall view of the performer. For this listener the majesty of the Piano Sonata No. 3 in B minor is the finest on record, but Fliter adds shorter favorites such as the Ballade No. 4 in F minor and the Grand Valse Brillante in E Flat as though to prove that these 'warhorses' can be fresh and thrilling when under her strong and elegant hands.

Better known in Europe than even her own Argentina and in the USA, Ingrid Fliter is definitely one of the bright lights of the piano and with this recording she leaves little doubt that she is on the ascent. Grady Harp, December 08
Read more
10 people found this helpful
Helpful
Report abuse

RenMan
5.0 out of 5 stars Very fine Chopin recital!
Reviewed in the United States on August 25, 2008
I wasn't overly familiar with Ingrid Fliter's work. She is an Argentinian pianist who has come to international renown in the last couple years. On Martha Argerich's urging, she continued her musical career in Europe and tours globally.

Her Chopin is wonderful - full-sounding yet sensitive, emotional but strong. The Ballade is terrific - one of the best I have heard (my favorite is Maurizio Pollini's version). The other pieces are equally beutiful and competent - remniscent of Vladimir Ashkenazy; very clear, beautiful playing. Check the sound samples here for yourself, or check out some videos of her on youtube.
Read more
4 people found this helpful
Helpful
Report abuse
See all reviews

A/Burrows
5.0 out of 5 stars Born to Play Chopin!
Reviewed in the United Kingdom on October 21, 2012
Verified Purchase
I have had the great good fortune to hear this stunning pianist live on two occasions in Glasgow with the Royal Scottish National Orchestra. One of these concerts was this year when she was performing Chopin's Piano Concerto No.2 and what a scintillating performance it was. If anyone was born to play Chopin, it is this lady. Most of Ingrid Fliter's CD's so far have been by Chopin [for EMI 2008], and this one includes a mixture of his most famous pieces like the Piano Sonata No. 3 in B minor, Three Mazurkas, Barcarolle In F Sharp, Grande Valse Brillante In E Flat, Three Waltzes and the Ballade No. 4 in F minor. All are played exquisitely in the true spirit of Chopin by a fine interpreter of his music. This CD is 'a must' for anyone's Chopin collection.
Read more
3 people found this helpful
Report abuse

Ashenden
5.0 out of 5 stars Chopin CD
Reviewed in the United Kingdom on February 6, 2012
Verified Purchase
A well recorded and marvellously played selection of Chopin pieces. Fliter clearly understands the nuances of each piece and plays them with assurance and sensitivity.
Read more
One person found this helpful
Report abuse

Dogbertd
3.0 out of 5 stars a mixed bag
Reviewed in the United Kingdom on June 6, 2010
Verified Purchase
Any Chopin recital that contains both the Sonata No 3 and the Barcarolle is already going to be popular with me, and to get the 4th Ballade as well is icing on the cake. Fliter has an admirable technique and is reasonably well recorded (there's a boominess that robs the more crowded sections of detail), but the problem is her tendency to linger over the lyrical sections of these works. The Sonata in particular is disfigured by this approach, with the second movement almost stuttering to a halt, and the third movement being drawn out to the point where you wonder if it's ever going to end. The Barcarolle was also spoiled for me by what appeared to be an uncertainty about how the piece should be approached. Nevertheless the Waltzes and Mazurkas go very well indeed. I also couldn't really believe that an artist of this calibre would allow herself to be photographed in the style of a ditsy ingenue, which, having seen her in concert, Ms Fliter certainly is not.
Read more
5 people found this helpful
Report abuse
See all reviews