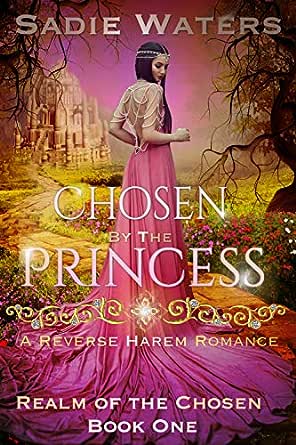 You've subscribed to Realm of the Chosen! We will preorder your items within 24 hours of when they become available. When new books are released, we'll charge your default payment method for the lowest price available during the pre-order period.
Update your device or payment method, cancel individual pre-orders or your subscription at
Your Memberships & Subscriptions
There was an error. We were unable to process your subscription due to an error. Please refresh and try again. 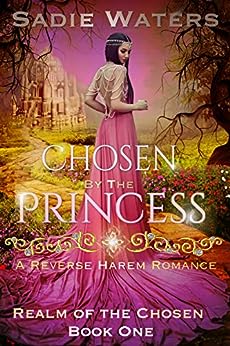 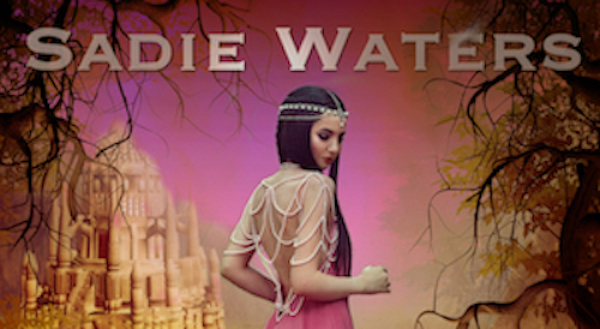 Chosen by the Princess: A Reverse Harem Romance (Realm of the Chosen Book 1) Kindle Edition 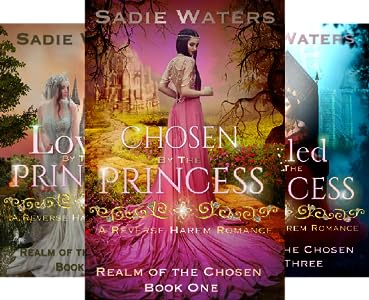 3.6 out of 5 stars
3.6 out of 5
18 customer ratings
How does Amazon calculate star ratings?
Amazon calculates a product’s star ratings based on a machine learned model instead of a raw data average. The model takes into account factors including the age of a rating, whether the ratings are from verified purchasers, and factors that establish reviewer trustworthiness.
Top reviews

R Hartweg
2.0 out of 5 stars A very bizarre universe. I'd almost say reverse rape instead of reverse harem
Reviewed in the United States on July 10, 2019
Verified Purchase
While I appreciate the new and innovative, this premise pushes boundaries, and not in a good way. I'm trying to think of how to review without spoilers (which usually isn't challenging).
Let's go with, men are required to provide sex to any woman of the upper classes if they ask for it, poor lower class women have to go about things the old fashioned way. And the guys better do the best job of it they can. The universe rolls on men providing women pleasure. If she didn't make it sound like the guys, for the most part, are all too happy to oblige it would feel kinda rapey. Women rule, men are around to serve in various ways: guards, stablemen, sex partners. The plot becomes extremely predictable pretty early on - sweet heroine, evil person who must be taken down, which guys will be chosen. There are a few hot scenes. Just be prepared to suspend all belief and be ok with knowing what's going to happen for the most part before it does.

A. Vogel
3.0 out of 5 stars Interesting but a little disappointing at the end
Reviewed in the United States on March 17, 2020
Verified Purchase
I'm a little of two minds about this book. I really enjoyed the cultural set up of a society run by women where men are reduced to objects of desire with little or no purpose in society. Waters' call for equality by taking a closer look at what extremist feminists of our era are saying about men and women and what that could look like in practise is a really meaningful message and I'm so grateful for how well she's done it.

On the other hand, this book could have done with a bit more polishing. There were too many irritating errors for it to be as enjoyable as it could have been. But worst of all, the ending was disingenuous. The twist didn't come as a surprise at all. Too much was given away and Kit, the main, character was too passive, brushing off a load of things she noticed but never had the guts/presence of mind to examine more closely. The ending is also cut off because of this fad of creating series. It just didn't do it for me and ruined an otherwise enjoyable read

Kindle Customer
1.0 out of 5 stars Not a reverse harem
Reviewed in the United States on June 17, 2019
Verified Purchase
I read the entire book and no reverse harem. I kept hoping to read some great sexy time scenes, at the least. Around 80% thru the book something finally happens. I'm glad the book was free. Very disappointing. And this is only the 1st half of the story, you'll have to by the next book to find out who the princess chooses
Read more
3 people found this helpful
Helpful
Comment Report abuse

Kindle Customer
5.0 out of 5 stars Alpha and Omega
Reviewed in the United States on June 20, 2019
Verified Purchase
As it was in the beginning so shall it be in the end...Kit and Eli/Princess Katrinetta and Eliason Goedwig...Clearing to Choosing...Commander of the Guard to Newly elected Representative of Eastbury. Wow. Can't wait to read the other 2 books in the series. Loved by the Princess and Ruled by the Princess.
Read more
One person found this helpful
Helpful
Comment Report abuse

Kindle Customer
4.0 out of 5 stars Good
Reviewed in the United States on June 18, 2019
Verified Purchase
Enjoy
Yes the story. Two friends who care deeply for each other that know in their heart they can never be together due to circumstances well beyond their control. A vengeful mother and queen who holds all the power to make life miserable for the pair. Complex love story, but what is not complicated about love?
Read more
Helpful
Comment Report abuse

Kindle Customer
3.0 out of 5 stars Different style
Reviewed in the United States on July 14, 2019
Verified Purchase
I am not sure if I liked this book or not. Storyline was a bit confusing in places. A bit of previous history would have been good. I think this would have pulled this story together better for me.
Read more
Helpful
Comment Report abuse

Sienna
5.0 out of 5 stars Great read!
Reviewed in the United States on July 10, 2019
Verified Purchase
This book was a great read. The story line is very interesting and has good depth. It was everything a reverse harem should be and I’m interested to see how Kit works out her struggles in the next books! I would recommend it to anyone interested in a princess story with a twist.
Read more
One person found this helpful
Helpful
Comment Report abuse
See all reviews from the United States

Joanne Turner
3.0 out of 5 stars Not what was expected
Reviewed in Australia on June 20, 2019
Verified Purchase
An okay read but not what I was expecting. A bit predictable. Would recommend to anyone who loves historical romances.
Read more
Helpful
Sending feedback...
Thank you for your feedback.
Sorry, we failed to record your vote. Please try again
Report abuse