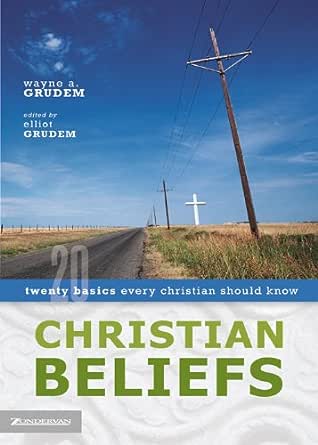 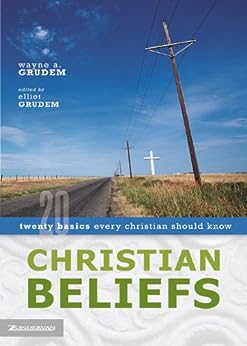 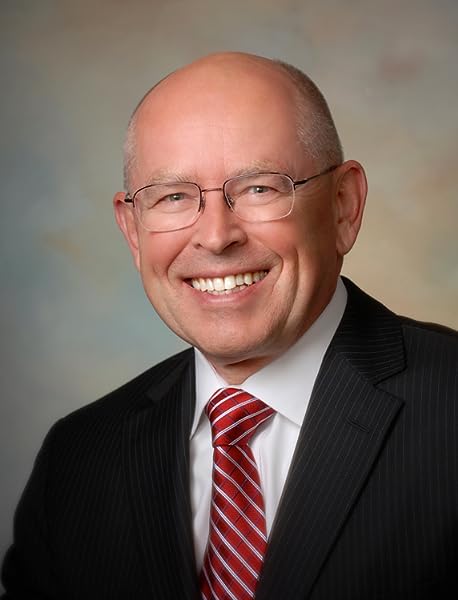 'These truly are 20 basic beliefs that every Christian should know. Wayne Grudem is a master teacher with the ability to explain profound truths is simple language. He is a man of deep conviction and theological passion -- and those who read this book will be both educated and encouraged in the faith.' -- R. Albert Mohler Jr., President -- R. Albert Mohler Jr. --This text refers to the paperback edition.

Christian Essentials Made Plain and Simple God doesn't call every Christian to go off to seminary, but there are certain matters of doctrine---that is, the church's teaching---that every Christian simply must know. Theology is important because what we believe affects how we live. If you're a relatively new believer in Jesus, or if you're a more mature Christian looking for a quick brush-up on basics of the faith, Christian Beliefs is for you. This readable guide to twenty basic Christian beliefs is a condensation of Wayne Grudem's award-winning book on systematic theology, prized by pastors and teachers everywhere. He and his son, Elliot, have boiled down the essentials of Christian theology for the average layperson and made them both clear and applicable to life. You will learn about the Bible, the characteristics of God, what it means that we are created in the image of God, what God has done for us in Christ, the purpose of the church, and much more. Each chapter includes questions for personal review or group discussion. These truly are twenty basic beliefs that every Christian should know. Wayne Grudem is a master teacher with the ability to explain profound truths in simple language. He is a man of deep conviction and theological passion---and those who read this book will be both educated and encouraged in the faith. R. Albert Mohler Jr., President, The Southern Baptist Theological Seminary, Louisville, Kentucky Based on Systematic Theology, this summary will certainly help beginners with Christ to get the hang of their faith. J. I. Packer, Regent College, Vancouver, British Columbia As Wayne Grudem's Systematic Theology contracts into a compact book, I do not lose my enthusiasm for the truth he loves and the clarity of his words. John Piper, Bethlehem Baptist Church, Minneapolis, Minnesota --This text refers to the paperback edition.

Wayne Grudem is research professor of Theology and Biblical Studies at Phoenix Seminary in Phoenix, Arizona. He holds degrees from Harvard (AB), Westminster Theological Seminary (MDiv, DD), and Cambridge (PhD). He is the author of more than a dozen books including the bestselling Systematic Theology.

Elliot Grudem is Senior Minister at Christ the King Presbyterian Church (PCA) in Raleigh, North Carolina. He and his wife, Kacey, live in Raleigh with their daughter. --This text refers to the paperback edition.
Read more

4.7 out of 5 stars
4.7 out of 5
804 global ratings
How are ratings calculated?
To calculate the overall star rating and percentage breakdown by star, we don’t use a simple average. Instead, our system considers things like how recent a review is and if the reviewer bought the item on Amazon. It also analyzes reviews to verify trustworthiness.

Dr. David R. Bess
5.0 out of 5 stars Solid Introduction to Biblical Doctrine for the Laity
Reviewed in the United States on October 29, 2018
Verified Purchase
I've been looking for a good, concise introduction to Biblical doctrine that I could use with the members of my Baptist congregation. I'm pleased with what I've found in this title. There is a large number of academic tomes on systematic theology for seminarians, but there's a scarcity of resources geared for the laity. Many of those resources compromise theological integrity for the sake of brevity and relevance. This one is a welcome exception.
Grudem here is clearly writing from a Reformed perspective. He begins by making a strong case for the authority, inerrancy, clarity, and sufficiency of Scripture. He then proceeds to move quickly through a summary of many of the topics covered by a systematic theology. He writes in a very understandable, readable manner, yet conveys the basics that a new student of Biblical doctrine would need to grasp. Although I see this work as a very helpful resource for church members, a few leaders may be disappointed with it. Leaders who want something that will stress Dispensational eschatology won't find it here. While he touches upon it, he shares other viewpoints. Also, leaders who are adamantly cessationist may shy away from it, because Grudem is known for being an "open but cautious" continuationist scholar, among the likes of John Piper and D.A. Carson. Even though I'm a cessationist, I'm not adamantly so, and could easily use this book despite one or two subtle continuationist references. This title is well worth the small investment of money and time required to get better acquainted with it. If you're looking for a solid introduction to Biblical doctrine for the laity, you'll find it here. I recommend it highly.
Read more
16 people found this helpful
Helpful
Report abuse

George Everlast
2.0 out of 5 stars Lacking Humility and Transperency
Reviewed in the United States on January 6, 2019
Verified Purchase
This is a primer not on "Christian Beliefs" but rather "Reformed Theology". Now, to the authors, who are Reformed Christians, those two things are synonymous, but they should have the humility to at least acknowledge that there exist competing beliefs, as well as the transparency to disclose that they are approaching the subject matter from a Reformed perspective - no where in the title, product description, or anywhere in the book itself do they do so. Not a single theological concept do they discuss any competing viewpoint. Rather, they simply take for granted and covertly attempt to persuade the reader that Reformed Theology is "Christian Beliefs".
Read more
17 people found this helpful
Helpful
Report abuse

John Wolf
5.0 out of 5 stars Intro to Systematic Theology
Reviewed in the United States on January 3, 2016
Verified Purchase
This book is a introduction to systematic theology and a condensed version from his Systematic Theology textbook that is used at the college level. The book contains the basic facts of the major essential doctrines of the faith covering topics like Christology the study of Christ, the atonement, the doctrine of the Holy Spirit, the doctrine of man, sin, the church, and such. Also a added bonus is that it is written from a Calvinist perspective so Calvinists will feel at home here. No this is not as in depth as Full Systematic Theologies so reviewers that complain for the lack of detail need to consider that this book was written for laymen. At the end of each study are questions for review and application. The questions are elementary in depth. Book also contains a index which is most helpful. Overall a great intro to Systematic Theology that I recommend for laymen.
Read more
13 people found this helpful
Helpful
Report abuse

Chris Meirose
5.0 out of 5 stars Excellent for a Bible Study or adult Sunday School class
Reviewed in the United States on November 12, 2012
Verified Purchase
Call it a primer on systematic theology.

Here are the topics covered in this new version:

I think that this would be an ideal book for Sunday School classes, and especially for memberships classes--as well as a wonderful tool for discipleship in the faith. Review and application questions are included to facilitate discussion. I taught it to a group of 30 people over 20 weeks with ages ranging from 10-90 and everyone got something out of it.
Read more
30 people found this helpful
Helpful
Report abuse

Marcus
5.0 out of 5 stars Excellent.
Reviewed in the United States on February 11, 2016
Verified Purchase
Have been walking through this book with my son and have really enjoyed it. It provides very good explanations for some very hard to grasp concepts. This is a book I hope to go through with each of my children in order to strengthen their understanding of God and His plan. I hope they keep their own copies of the book as a reference for the future. I have very much enjoyed that this is not a book of personal beliefs, but it is a book that clearly shows what the Scriptures teach on a given topic. I feel like I have grown in my understanding of God as I have walked through this with my son. I have used the Systematic Theology text to delve deeper into a few of the topics, and it is nice that those two books match up so well. Highly recommend.
Read more
9 people found this helpful
Helpful
Report abuse
See all reviews

YoungCalvinist
5.0 out of 5 stars Very good book
Reviewed in the United Kingdom on July 20, 2010
Verified Purchase
I bought this book after my friend recommended it to me to use with the new Christians or people interested in the Christianity. I studied it with my friend, who had no prior knowledge of Christianity. All topics are clearly explained and questions at the end of the chapters are helpful as well. Highly recommended.
Read more
7 people found this helpful
Report abuse

MRS JUDITH MILES
5.0 out of 5 stars Thanks to Wayne Grudem
Reviewed in the United Kingdom on April 11, 2018
Verified Purchase
This is an excellent book to give one a clear understanding of the Christian Faith.
Read more
One person found this helpful
Report abuse

GRACE IRENE SLACK
5.0 out of 5 stars Five Stars
Reviewed in the United Kingdom on July 24, 2017
Verified Purchase
It's great for all needs and help in Bible study.
Read more
Report abuse

Amazon Customer
5.0 out of 5 stars Five Stars
Reviewed in the United Kingdom on January 6, 2017
Verified Purchase
Book books are brilliant and worth reading.
Read more
Report abuse
See all reviews