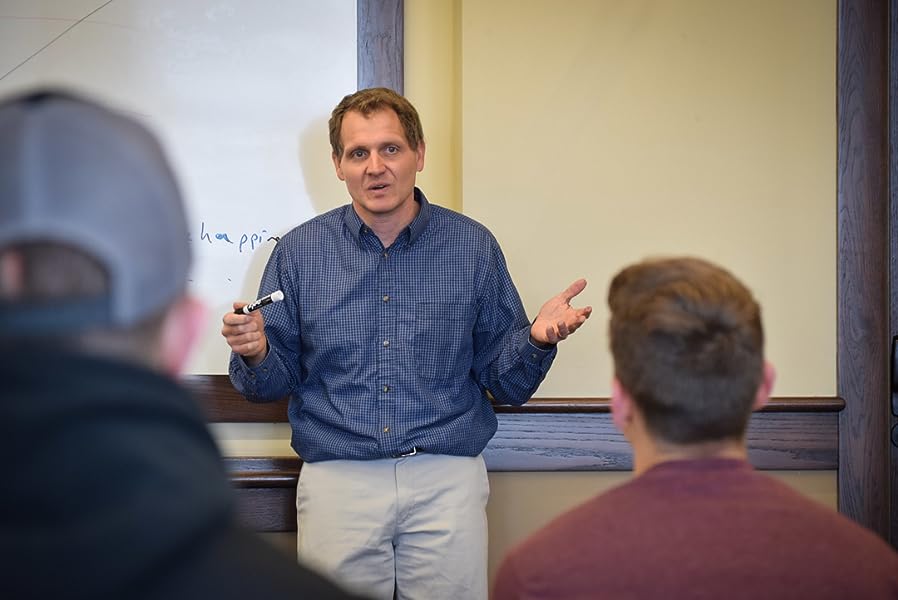 by John Rziha (Author)
4.5 out of 5 stars 15 ratings
See all formats and editions
Sorry, there was a problem loading this page. Try again.

To take a journey, travelers must know where they are, where they are going, and how to get there. Moral theology examines the same three truths. The Christian Moral Life is a handbook for moral theology that uses the theme of a journey to explain its key ethical concepts. First, humans begin with their creation in the image of God. Secondly, the goal of the journey is explained as a loving union with God, to achieve a share in his eternal happiness. Third and finally, the majority of the book examines how to attain this goal. Within the journey motif, the book covers the moral principles essential for attaining true happiness. Based on an examination of the moral methodology in the bible, the book discusses the importance of participating in divine nature through grace in order to attain eternal happiness. It further notes the role of law, virtue, and the gifts of the Holy Spirit in guiding and transforming humans into friends of God, who participate in his happiness. Following this section on moral theology in general, the book analyzes the individual virtues to give more concrete guidance. The entire project builds upon the insights of great Christian thinkers, such as Thomas Aquinas, Thérèse of Lisieux, and John Paul II, to uncover the moral wisdom in scripture and to show people how to be truly happy both in this life and the next. This book will be of great interest to undergraduate students of moral theology, priests and seminarians, parents and teachers seeking to raise and to form happy children, and anyone interested in discovering the meaning of true happiness.

“The Christian Moral Life provides a necessary corrective to the popular misperception of Christian morality as nothing more than a system of oppressive rules that impair human freedom. He methodically sets forth the Christian moral life in all its splendor as nothing less than our grace-filled journey to personal fulfillment and eternal happiness, drawing upon scripture and the timeless wisdom of the saints. We used an earlier version of this text in our permanent diaconate program, and the students found it eminently readable and enlightening.” ―Leon Suprenant, Archdiocese of Kansas City, Kansas

"John Rziha's book satisfies the long-awaited hope for a suitable textbook for students and professors of moral theology that is both robustly Catholic and rigorously academic from cover to cover. His copious work provides the framework and principles for a study that is both soundly Thomistic and refreshingly personalistic. This delightful text, laudably unencumbered by needless technical jargon, leads the reader to a fruitful contemplation and critical apprehension of the way toward genuine human beatitude in Christ by way of grace, virtue, and law. More than merely a suitable textbook, Dr. Rziha's book exemplifies true Christian and Catholic humanism at its finest. As such, this text ought to be standard fare for all students and professors of Catholic theology―not only those whose work directly treats of the moral life in Christ." ―Michael G. Sirilla, Franciscan University of Steubenville

“What is unique about The Christian Moral Life is that it at once offers a comprehensive treatment of moral theology with the necessary background in theological anthropology, takes an approach based in the virtues, beatitudes, and gifts of the Holy Spirit, and also treats the numerous elements of the law pertinent to the virtues.” ―Christopher J. Malloy, University of Dallas

“Rziha always writes in accessible language to convey deep philosophical and theological ideas to the uninitiated. . . . The Christian Moral Life is a sound introductory textbook on the complexities of moral theology.” ―Catholic Library World

“. . . a welcome offering and an excellent resource for anyone teaching moral theology at the undergraduate level. The book’s subtitle, Directions for the Journey to Happiness, suggests the guiding analogy for the content and structure of the text, namely that of a pilgrim on a journey. Using this analogy Rziha presents the Thomistic synthesis of law, virtues, and grace as perfective of the human desire for happiness and corrective of the theological history of human nature.” ―Reading Religion

Matthew J. Ramage, Ph.D.
5.0 out of 5 stars The best introduction to moral theology
Reviewed in the United States 🇺🇸 on June 28, 2018
Verified Purchase
As a college professor who has taught upwards of thirty sections of an introductory Christian Moral Life class over the past ten years, I have searched widely for a suitable book for introducing students to the discipline of Catholic moral theology. While there are some decent offerings out there, Rziha’s recent book easily surpasses them all in clarity, thoroughness, and applicability. Some moral theology books are too technical and thus inaccessible for the average reader. Others are helpful and very readable but omit key concepts such as a detailed explanation of the role of law (actually four types of law, according to Aquinas) and grace in guiding humans to fulfillment. This book includes all the key concepts that a beginning student needs, whether reading for academic purposes or for personal enrichment.

The structure of this volume resembles that of Aquinas’s treatise on moral theology in his Summa Theologiae, but Rziha has made a few tweaks that I find helpful. Following Aquinas in the I-II of his Summa, the first of the book’s two parts deals with realities fundamental to the study of moral theology in general. The author grounds his moral theology in the Trinity and sound anthropology. But to this he adds a vital historical element that Aquinas himself did not consolidate all in one place—an extended treatment of human nature across its various stages over time which paves the way for the book’s later discussions of man’s natural inclinations, supernatural inclinations, sin, redemption, etc. After detailing what the human being is—where he begins his “journey to happiness,” as the author fittingly calls it— next comes the discussion of man’s last end, the “destination of the journey.” Other chapters in the first part then deal with foundational topics including sin, grace, law, virtue, and guidance from the Holy Spirit. As I hinted at above, the book’s chapter on law is critically important and by its own accord sets the book apart from its peers.

Like the II-II of Aquinas’s Summa, the second half of this book is dedicated to the individual virtues, with a chapter dedicated to each of the theological and cardinal virtues. Helpfully, Rziha discusses the faith, hope, and charity first, a move which I will appreciate as I adopt this textbook for use this coming semester. I had always found it inconvenient that the book I was using treated grace and the theological virtues at its end, whereas I want students to understand their role early on so that they can see how the Christian faith informs the exercise of the cardinal virtues of prudence, justice, temperance, and fortitude. Thanks to this volume, I will now be able to achieve that goal much more easily.

As my own thought and writing focuses more in the realm of biblical scholarship than moral theology, my favorite part of this book was without doubt Ch. 4 on “Moral Methodology in the Bible.” The Second Vatican Council taught the study of Scripture is the “soul of theology,” but it is not as easy as one might think to find moral theology books that ground themselves in the revealed word of God. Modeling his efforts here on the work of renowned Dominican Servais Pinckaers, Rziha’s book stands as an eminent example of how to put Vatican II’s teaching into practice, and my hope is that it will spur others in the field to follow his example.

In particular, I found a treasure in Rziha’s narration of how the Old Testament’s deontological approach to morality (focusing on rewards and punishments) transitions in the New Testament into a teleological outlook (focused on internal transformation resulting in proper action and, ultimately, happiness). This distinction does not amount to a criticism of the Old Testament, let alone a call to ignore or disparage it. Rather, like the Fathers of the Church, Rziha thinks of the gradual development of morality throughout the Bible as a move from spiritual childhood to spiritual maturity. As all parents know, sometimes a deontological approach is what children need, but we ultimately need to be leading our children to a teleological vision of morality wherein the rules are not seen merely as the arbitrary imposition of authorities but instead as the loving gifts of parents who want their good and want them to get to the point where they don’t need the rule in order to act rightly—in other words, to the point of virtue.

In sum, unlike older moral theology manuals, this new volume manages to lay out the foundations of Catholic moral theology in a very practical way, with straightforward examples on practically every page. As a result, Rziha’s book achieves the rare feat of being readable by a wide audience while also assisting those who are already conversant in the field. For theologians like myself, the book will help to better formulate and structure many of the things we are already saying. For the Christian who has never read a page of moral theology, this volume will provide you with straightforward directions for how to attain happiness as enshrined in two thousand years of Catholic tradition.
Read more
8 people found this helpful
Helpful
Report abuse

John Jirak
5.0 out of 5 stars An Excellent Work!
Reviewed in the United States 🇺🇸 on February 7, 2019
Verified Purchase
The Christian Moral Life is an outstanding primer for understand the moral life. Dr. Rziha's book would have really enhanced my seminarian formation. Every seminarian and priest should have this book readily available on his shelf. Even for the spiritual life, once one grasps the Thomistic theology on the powers of the soul; including the emotions, the intellect and the will, the spiritual writings of certain writers of mystical theology such as St. John of the Cross open up and cease to become esoteric.

Dr. Rziha's simplicity and clarity on complex themes provide an excellent foundation for inspiring and feeding souls in the work of the New Evangelization. Moreover, it provides a great foundation for further study.
Read more
4 people found this helpful
Helpful
Report abuse
See all reviews