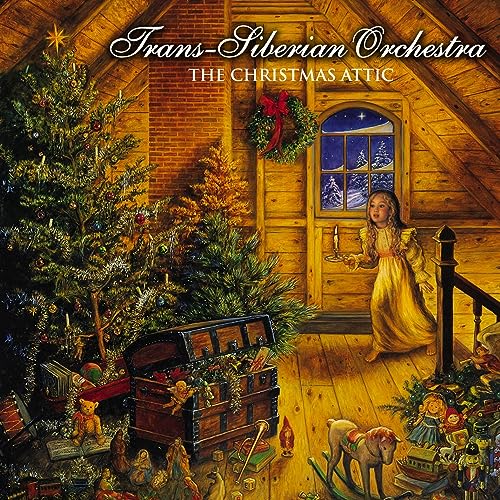 Trans-Siberian Orchestra
September 15, 1998
4.6 out of 5 stars 1,176 ratings
See all 17 formats and editions Hide other formats and editions
Buy the CD album for $9.97 and get the MP3 version for FREE.&nbspCD album ships from and sold by Amazon.com. Terms and Conditions. Does not apply to gift orders. Complete your purchase of the CD album to save the MP3 version to your Music Library.

4.6 out of 5 stars
4.6 out of 5
1,176 global ratings
How are ratings calculated?
To calculate the overall star rating and percentage breakdown by star, we don’t use a simple average. Instead, our system considers things like how recent a review is and if the reviewer bought the item on Amazon. It also analyzes reviews to verify trustworthiness.

Chris
3.0 out of 5 stars Odd reissue, unless you want it on vinyl
Reviewed in the United States on December 3, 2018
Verified Purchase
*Please note this rating does not reflect the quality of the original album, just this specific 20th anniversary reissue.* This is kind of an odd reissue, and unless you want it on vinyl, it’s probably not worth it to buy again if you have the original version on CD/MP3. Though it’s billed as a remastered version there’s no obvious difference in the sound after comparing them. It’s nearly if not completely identical to the original 1998 release (which sounded fine to begin with). However, two songs have been edited/shortened: “The World That She Sees” has been basically cut in half from nearly six minutes to three - it now ends shortly after the second chorus, leaving out the whole second section. And “Music Box Blues” was slightly trimmed by about 30 seconds - same as the version that appeared on the Ghosts of Christmas Eve compilation. This is to presumably make room for the two extra tracks: “The World That He Sees,” (not on the original 1998 pressing) and a bonus live track of “Christmas Jam” (strange choice since it’s a song from a different album, but it’s a good version). There’s also the new cover, which is fine although I prefer the original, which was a more natural continuation from the first album’s art.
Read more
17 people found this helpful
Helpful
Report abuse

David Parker
5.0 out of 5 stars Listened to it about 100 times already ...
Reviewed in the United States on December 27, 2019
Verified Purchase
I bought this for the "Christmas Canon" which I heard on and was pointed to by FamilyRadio.com.
Delete tracks 7 and 17: Jazz has absolutely no place in Christmas and those two do not belong on this album.
I keep listening to this, it is strange but evokes many memories in that strange way.
Read more
One person found this helpful
Helpful
Report abuse

Trin
4.0 out of 5 stars Not sure about this cd
Reviewed in the United States on December 11, 2018
Verified Purchase
I ordered The Ghosts o Christmas last year and loved it. It was the kind of rock I like but had the semblence of a real orchestra and the songs were very good so I ordered this, and though some songs and music was as awesome as last year, too much of the cd dragged. When I read the pamphlet that came with it the songs had great words but just didn't leap out at me. I loved,The World That He Sees, and the corresponding, The World That She Sees. but toward the end it was ho hum to me. I liked it more the more I listened to it but it didn't compare to The Ghosts of Christmas. trin
Read more
2 people found this helpful
Helpful
Report abuse

Linda v.
5.0 out of 5 stars The Christmas Attic: Trans Siberian Orchestra, Pre-Owned CD.
Reviewed in the United States on December 26, 2016
Verified Purchase
Beautiful Christmas music. Excellent seller. I purchased this item used, however it is as good as new and sounds perfect. It did not have a jewel case, but it really doesn't need one. I keep it in a holder on the sun visor of my car. If you don't mind having a great CD, even without the case this is a good seller to order from. I am sure other CD's will come with the case, if it's available. I did get all the other written material that is packaged with a CD-but, I digress, this is a very good transaction for less then a dollar. A great way to build up your music collection.
Read more
One person found this helpful
Helpful
Report abuse

happyinPA
5.0 out of 5 stars My favorite CD
Reviewed in the United States on January 28, 2021
Verified Purchase
I purchased this as a gift. I already have a copy. It's my favorite version of their work. Trans Siberian Orchestra uses local talent for many of the singing parts as they travel, so each CD is slightly different. Love this! The CD arrived very quickly, in perfect condition, in time for me to give it as a gift for Christmas.
Read more
Helpful
Report abuse

Fisher
5.0 out of 5 stars Unique group!
Reviewed in the United States on December 11, 2016
Verified Purchase
The first you probably heard of TSO was Carol of the Bells several years back. If you like a change up in your Christmas music and would like some sounds and songs that covers all the bases along with a unique story, then you can't go wrong with these guys. I have all there music and have enjoyed it for years. Only reason I'm buying this is I scratched out the cd I have. I highly recommend taking a chance on it.
Read more
One person found this helpful
Helpful
Report abuse

R. MCRACKAN
4.0 out of 5 stars Good album
Reviewed in the United States on December 7, 2007
Verified Purchase
As with all TSO, I'd rate this as good, very good, but not fantastic. After enough listens you get a sensation that the 80s are coming back to abduct you. There are safe songs and ambitious songs. Some of the ambitious songs work and some fall flat on their face. Either way, I respect them for trying, even if moments make my cringe. It's nice to not have all music be safe and grey.

I like that this is a full thematic album. Often I want to hear individual disconnected songs. But I don't want my only options for decent themed rock albums to have come from several decades ago (E.g. The Wall). TSO does nothing if not create cohesive thematic albums.

The last reason I'm glad I got this album sounds a bit weird: it's the only decent one of the genre. If there was lots of great competition for good Christmas music, I may not play all of my TSO albums several times a year - I'd be listening to the better stuff instead. Let's face it: the reason TSO has maintained over 10 years of popularity is that in the absence of competition, their fan base can only keep growing. Anyone who remotely likes this stuff will listen to them and stay with them because there are no other bands out-doing them in this arena.

As many others have said: in some ways this is Christmas music for people who don't like Christmas music. I, for one, cannot stand almost any of the rest of it. I've had the same 3 Bing Crosby songs shoved down my throat for weeks on end every year for decades. I'm not a Scrooge. I want to get in the season too but I don't see why that means it must be with "traditional" safe garbage from 30-50 years ago that sets my teeth on edge. TSO is an alternative that is always good and sometimes great.
Read more
2 people found this helpful
Helpful
Report abuse

booklover
5.0 out of 5 stars My go-to for music even when it's not Christmas.
Reviewed in the United States on January 28, 2020
Verified Purchase
I absolutely love this whole CD! It's great to listen to when I am relaxing with it quietly playing in the background or getting ready in the morning and having it cranked.
Read more
Helpful
Report abuse
See all reviews

J. Heap
4.0 out of 5 stars Christmas Rocks!
Reviewed in the United Kingdom on November 20, 2012
Verified Purchase
Interesting is how one reviewer describes this album. I think that is accurate, but may be misleading.
If you like traditional Christmas songs/tunes and you also like melodic rock guitar, then there's a good chance that you will love TSO and their take on Christmas.
But if you like rock opera, or just story-telling in general, then again, this could be for you.
At this price, I don't think you will be disappointed.
Read more
One person found this helpful
Report abuse

richard cook
5.0 out of 5 stars TSO and christmas too
Reviewed in the United Kingdom on March 31, 2014
Verified Purchase
TSO have captured the spirit of Christmas in music and story with clever ideas and wonderful music to complement it.
Read more
Report abuse