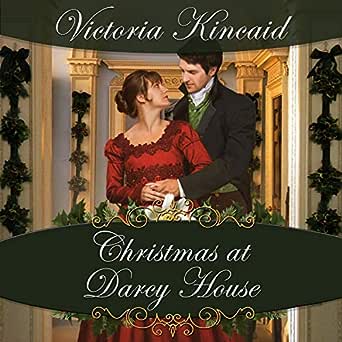 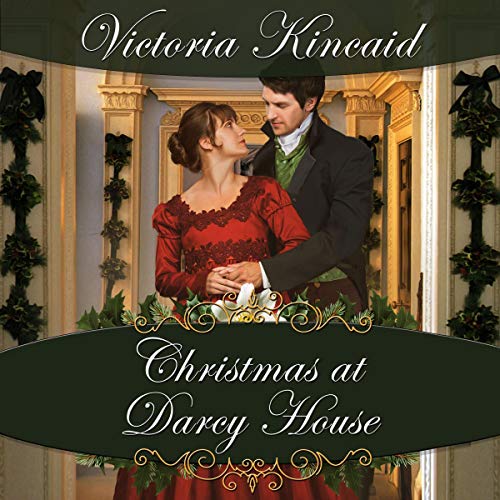 Christmas at Darcy House: A Pride and Prejudice Variation

Regina Mayorga
4.0 out of 5 stars Fell a little flat towards the end, but great nonetheless
Reviewed in the United States on December 10, 2017
Verified Purchase
Though this is being touted as a great Christmas story, it can be enjoyed year round. The premise is that instead of Jane, Elizabeth has gone to London for Christmastide. Wickham also magically appears in London and quite coincidentally inserts himself in Elizabeth’s life...or is it really a coincidence? You’ll have to read to find out. Of course, this situation frustrates Darcy as much as trying to get over her frustrates him.

The synopsis reads that Lizzy gets a proposal from both men; what you’ll see is just how spectacular one proposal is over the other. That being said, I believe my favorite interactions with our favorite couple are the physical ones. They’re pretty PG-13, but I loved them. Wickham is despicable of course and I’m glad he gets what’s coming to him.

Which leads me to what I didn’t care for. The epilogue seemed to tie up loose strings in regards to Wickham and someone else. But it seemed almost too quick and hastily written to be enjoyable. I was honestly not a fan. Had the epilogue not been included maybe that would have helped, but we needed to find closure with Wickham, so a more fleshed our epilogue or an extra chapter would have helped.

I also greatly disliked Mr. Bennet and the Gardiners in this story. Very unusual in regards to the Gardiners, but I really resented their support of Wickham over Darcy until the very end. It grated on my nerves.

Despite all that, the story is worth the price and it’s a quick enough read for the holiday season. This author doesn’t really disappoint so it’s worth the read.

Debbie B.
5.0 out of 5 stars Wickham: The Grinch who TRIES to steal Christmas!
Reviewed in the United States on December 27, 2017
Verified Purchase
If you've read the book description for this, you know Wickham has a major role throughout. He's always looking for opportunities to mess with Darcy, and he's given even more motivation than usual here.

It's the Christmas season after the Netherfield ball. Darcy and Mr. Bingley are in London, but so are Mr. Wickham and Elizabeth Bennet in this imagining. She's staying with her Aunt and Uncle Gardiner. Mr. Wickham, with his charm and easy manners, is a frequent visitor.

Having been encouraged by Georgiana and Colonel Fitzwilliam, Mr. Darcy also starts calling. He's startled to see the favor Elizabeth and the Gardiners show to a man he knows to be untrustworthy. Although Darcy tries to warn Elizabeth, she doesn't believe him.

Ms. Grace really tortures Darcy in this one. The book is told mostly from his point of view, and the reader can feel his frustration with himself (because he can't express himself fluently to the lady he loves) and with the heart-rending situation.

The writing is lovely. I really love the romance. It might seem that Elizabeth's attitude changes too quickly except that the author makes it completely believable. I also enjoy the way some Regency Christmas traditions and seasonal London entertainments are woven into the tale, although it's apparent that the basic plot would work successfully at any time of year.
Read more
5 people found this helpful
Helpful
Comment Report abuse

Lillibet1812
4.0 out of 5 stars Sealed with a kiss... And, not just under the mistletoe...
Reviewed in the United States on December 16, 2017
Verified Purchase
A creative P&P variation that was set at Christmastime but did not have an overt Christmas theme. What it did have was many treasured elements of a good historical romance - a vile conspiracy & dastardly deeds committed by a unscrupulous villain, a dashing yet steadfast suitor & a heart that needed to be wooed before it could be won; additionally, there was familial opposition to be overcome & the triumph of honesty, decency & passionate devotion to be celebrated. The author wrote many scintillating scenes but there was also several large sections of explanatory narration to wade through; the dialogue between characters was often quite commonplace with limited amounts of witty banter. The tenacity with which Elizabeth clung so fiercely to her blinkered positive opinions of Wickham, at the beginning of the novel, was quite irritating but understandable (& explained) as the storyline unfolded. While this tale was inhabited by many of the traditional characters of P&P some of their behaviours & attitudes did not always align with those of canon - Mrs Gardiner filled in for her sister-in-law (fortunately, sans nerves) & Mr. Bennet stirred from his book-room. Much of the early part of the book focussed on creating the various elements of the plot; however, the pace of events in the story picked up from the midpoint onwards, when romantic endeavours were vigorously pursued & shameful schemes were implemented. On the whole, this was a very good book that, while being most entertaining, did not meet the sparkling standard (too many flat spots) usually associated with this highly talented author.

After a chance meeting with Elizabeth & her aunt, during a visit to the Bingley's London home, Darcy was irresistibly drawn to Cheapside to begin a tentative pursuit for her hand; only to by thwarted by her total lack of awareness regarding his desires, her relatives' reservations about the honourableness of his intentions & the disingenuous charm exerted by his personal nemesis - George Wickham (who was colluding with Caroline Bingley).

Darcy acted in an impulsive & out-of-character manner to overturn a minutes-old betrothal between Elizabeth & Wickham with some unsettling results. Georgiana visited Gracechurch Street to refute the lies & rumours that had been spread about her brother. After a walk in the park where Darcy kissed Elizabeth senseless, or was it sensible, they returned to the Gardiners' to be confronted by wall of opposition - an enraged father, infuriated uncle & irate aunt. Taking a stand against her relatives Elizabeth refused to return to Longbourn & announced her intention to remove to stay at her new friend Miss Darcy's home if the Gardiners would no longer house her. Her father capitulated & agreed to remain in London whilst she was courted by Darcy.

At a family outing to Astley's Amphitheatre more exciting things happened in the interval, in the privacy of the box, than in the arena during the show. Caroline continued to aid & abet her immoral cohort. Wickham tried to resume his engagement with Elizabeth & her family welcomed this development; however, she was not fooled by his smarmy act, anymore. He attempted to compromise her but was felled by single blow from Darcy's fist, thus, earning Mr. Bennet's heartfelt gratitude & approbation.

Christmas was being joyfully celebrated at Darcy House (obviously) only to have dinner interrupted by the unexpected & unaccompanied arrival of the pernicious Caroline Bingley (a plot point of incredulity, here) who, hoping to sow discord, informed all gathered about the role Darcy played in the removal of her brother from Netherfield Park. She was unaware that he had sought to make amends for this mistake until Bingley, also, arrived unexpectedly seeking Mr. Bennet's permission to marry Jane. An elated Elizabeth, finally, accepted Darcy's proposal & the Christmas gift given earlier in the day, supposedly from Georgiana & him, truly became her engagement ring. At the Twelfth Night wedding breakfast celebrations Elizabeth turned the tables on the scheming duo & declared their compromise, when an assignation gone awry was exposed to several of the wedding guests. Due to the potential for scandal it was a foregone conclusion that Caroline & Wickham would have to marry but the two newly-wed couples held out few hopes for a happy new year for that pair of miscreants (probably, depended on if marriage settlements favoured the bride & if the groom stayed around long enough to benefit). Maybe, next Christmas we will find out more.
Read more
4 people found this helpful
Helpful
Comment Report abuse
See all reviews

Kindle Customer
3.0 out of 5 stars A light tale
Reviewed in the United Kingdom on January 14, 2018
Verified Purchase
No great depth in this story, although it rattled along. Some recognisable character features for each of the main personalities. Found it hard to believe that Darcy would use the phrase "this is from me and Georgiana.." when giving Elizabeth a specific Christmas gift - well brought up young man, that he was. The Caroline and Wickham link had possibilities and could have added much...tied up too quickly at the end. But a good potential twist. So, some weaknesses. However, an undemanding story that wasnt without a good moment or two.
Read more
Report abuse

Kindle Customer
5.0 out of 5 stars Very enjoyable Christmastime story
Reviewed in Canada on December 9, 2017
Verified Purchase
This is was a very enjoyable read. Wickham and Caroline Bingley are truly two of a kind and plan some real trouble for Lizzy. Darcy does rescue Lizzy, but does not exactly endear himself in doing so. Fortunately with the help of his sister, all is set right, and we do get our happily ever after. I really liked this book and will enjoy reading it again.
Read more
Report abuse

Kindle Customer
4.0 out of 5 stars Good book
Reviewed in Canada on December 15, 2017
Verified Purchase
I enjoyed reading this book. It was well written. It was a bit frustrating at times but came to a happy ending. Elizabeth and Darcy character's were different from the original p&p. The ending was too rushed. I would recommend this book. It is a fun read in general.
Read more
Report abuse
See all reviews