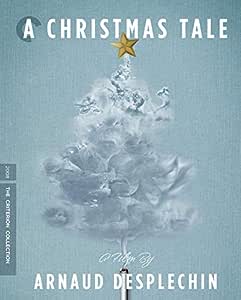 In Arnaud Desplechin's beguiling A CHRISTMAS TALE (Un Conte de No'l), Catherine Deneuve brings her legendary poise to the role of Junon, matriarch of the troubled Vuillard family, who come together at Christmas after she learns she needs a bone marrow transplant from a blood relative. That simple family reunion setup, however, can't begin to describe the unpredictable, emotionally volatile experience of this film, an inventive, magical drama that's equal parts merriment and melancholy. Unrequited childhood loves and blinding grudges, brutal outbursts and sudden slapstick, music, movies, and poetry, A CHRISTMAS TALE ties it all together in a marvelously messy package.

4.2 out of 5 stars
4.2 out of 5
70 global ratings
How are ratings calculated?
To calculate the overall star rating and percentage breakdown by star, we don’t use a simple average. Instead, our system considers things like how recent a review is and if the reviewer bought the item on Amazon. It also analyzes reviews to verify trustworthiness.
Top reviews

prisrob
TOP 50 REVIEWERVINE VOICE
5.0 out of 5 stars Blood Support
Reviewed in the United States on December 9, 2016
Verified Purchase
If you are looking for a light, Christmas themed film, this film is not for you. However, this films pulls you in because of all the family machinations, and I felt the need to know what was really going on. The Vuillard family, 2 sons, one daughter,a male cousin, and their significant others and children, are invited for Christmas.

The matriarch of the family, Juno, played by Catherine Deneuve, has a blood disease that will cause her death without a bone marrow transplant. Everyone must be tested to see who could help save her life.The patriarch, Abel played by Jean-Paul Roussillon, who is in the fabric dye business, tries to keep life and limb together, but it is Junon who rules the roost. They had four children, though their oldest, Joseph, died of a rare condition when very young. Elizabeth, the daughter played by Anne Consigny, is very depressed. She does not remember ever being happy. Henri, played by Mathieu Amalric, is the drunk, and the one not liked by anyone, even his mother. Ivan, played by Melvil Poupaud, seems to be the sane and favored one. Elizabeth's teenage son Paul, played by Emile Berling, has just been diagnosed with schizophrenia, and will return to a sanitarium after the holidays. Here they all gather from Dec.22 to Dec. 26.

It turns out Henri, the unfavored one, and Paul, the Schizophrenic, both are good matches for Juno and her need for a bone marrow transplant. Henri and Paul bond over this match. Throughout the Four days many issues arise, and the biggest is the banning of Henri by Elizabeth for six years. From my viewpoint, every adult in this family has some sort of issue, mental issues raise their head most often, or blood dyscrasia. This makes for a film full of vim and vigor, and the more you hang in, the better off you are.

A. L. Mays
5.0 out of 5 stars Holiday Spun
Reviewed in the United States on September 23, 2011
Verified Purchase
This film is always entertaining and inventive, though its pacing does provide a few pauses in action to let you check in with yourself about what you've just seen. The variety of creative devices put successfully into play in here hint at genius (Literature, Music: Classical, Jazz, Hip-Hop, and Art & Animation). The acting performances are natural and the characters heartbreaking. Their flaws are at once towering and human. I'm a student of film and believe in its potential to teach us something of who we are as we bump into each other in this life. This one teaches from start to finish in some unexpected ways.

It's a visual encounter of lyrical dimensions. And in typical French fashion, its romantic and heartbreaking, yet unsentimental. Admitting my bias for Holiday films, and their ability display family dysfunction not disposed to constructive resolution, this is a film that goes beyond the neurosis and reveals something surprising--plain old good will in some seemingly irredeemable people. Our families often mess us up, but they also have the power to help us heal and bloom from, despite, and because of their influences. This film recognizes that, and makes not excuses for it. This film is on my top 25 films list.
Read more
10 people found this helpful
Helpful
Comment Report abuse

L. M. in the 16th
4.0 out of 5 stars enigmatic messy luminous
Reviewed in the United States on January 8, 2011
Verified Purchase
ALERT- there are spoilers here:

This film is maddening in that the characters on many levels are completely unsympathetic...and yet they manage to draw you in and elicit empathy.

The acting is superb. I loved the music and the jerky cinematic quality- making it look like a home movie at times. In this respect, the cinematography reminds me a bit of Cousin Cousine and the shots of the family in that film at the party.

The story was multi-layered. Many times I expected some violent incident but I was immensely relieved that the film never resorted to this type of a device.

Questions are posed, mysteries are revealed and the questions remain unanswered at the end of the movie. Nothing is neat. All is messy and unresolved in away that is true to life. The relationshsip between Junon and her husband is unusually tender and believable. I loved the ending with its reference to The Tempest.
Read more
3 people found this helpful
Helpful
Comment Report abuse

Red Wood
3.0 out of 5 stars Brilliant, Tangibly Indepth But Didn't Fit Screen
Reviewed in the United States on January 6, 2017
Verified Purchase
This is easily one of the most detailed, realistic studies of a family ... with issues. As others have complimented. There are so many layers, beautifully done. However, the format did not fit the TV widescreen (???): couldn't read the subtitles. Will have to locate elsewhere,
Read more
One person found this helpful
Helpful
Comment Report abuse

pkgoode
5.0 out of 5 stars Wonderful
Reviewed in the United States on December 24, 2010
Verified Purchase
A Christmas Tale has become one of our favorite holiday movies. Stricken with a rare form of bone cancer, a family matriarch (Catherine Deneuve, still ravishing at 68) must turn to to her estranged black sheep son (Quantum of Solace's Mathieu Amalric) for help during a Christmas reunion. Superb study of family dynamics, one memorable scene after another, and fine performances by all, especially from Jean-Paul Roussillon as the father of the family. Mid-way through, you suddenly realize that you've become a part of the Vuillard family, and that you care about them, foibles and all.
Read more
2 people found this helpful
Helpful
Comment Report abuse

M
5.0 out of 5 stars Five Stars
Reviewed in the United States on December 20, 2016
Verified Purchase
A bit difficult to follow and poor video quality (only SD no HD). However, the story line was great.
Read more
Helpful
Comment Report abuse
See all reviews

Movie Rambler
5.0 out of 5 stars deliciously entertaining
Reviewed in the United Kingdom on August 18, 2009
Verified Purchase
Yet another middle class soap opera that the French do with such sophistication. Similar to Those Who Love Me Can Take the Train in which a dysfunctional group of family and friends travel from Paris to Limages to attend a funeral. A Christmas Tale tells the story of a reunion instigated by Junon the matriarch who needs to gather all the family together not just for Christmas but for reasons of her own. Catherine Deneuve, who still has a very commanding presence on screen, plays Junon wife of Abel (Jean-Paul Roussillon), mother of Anne Consigny's Elizebeth a reclusive playwright. The popular French actor Mathieu Amalric is the older son Henri a raging alcoholic who relishes confrontation. While Melvil Poupaud plays the youngest son Ivan who is the most unaffected of the three children. As the family members gather together for Christmas they attempt to reconcile the past and plan the future during which their own private tensions and affections are re-awakened. Terrific performances, as you would expect, from this high profile cast. A deliciously entertaining film. Best French film of 2008?
Read more
16 people found this helpful
Report abuse

G. Bailey
4.0 out of 5 stars An interesting bunch of characters.
Reviewed in the United Kingdom on January 6, 2010
Verified Purchase
Forget the title.Christmas has nothing to do with it.What makes this a great film is the way the tale brings all the characters together so that they all interact brilliantly with one another and we care for them.A tour de force by director Desplechin and co-writer Bordieu.
Read more
3 people found this helpful
Report abuse

Camilla
5.0 out of 5 stars Love this
Reviewed in the United Kingdom on April 12, 2016
Verified Purchase
I love this movie from the storyline, acting filming and sets. a great tale well told.
Read more
Report abuse

HelF
3.0 out of 5 stars Interesting film
Reviewed in the United Kingdom on February 8, 2013
Verified Purchase
Classical art french film set in a dysfunctional family. If you like french humour you will be served as it is just it.
Read more
One person found this helpful
Report abuse
See all reviews