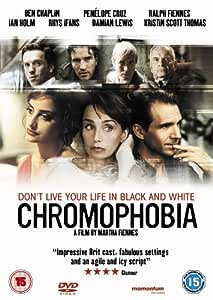 Ensemble drama starring Damian Lewis, Ralph Fiennes, Penelope Cruz and Kristin Scott Thomas. Marcus Aylesbury (Lewis) has his fair share of dilemmas and secrets in his family. His wife (Scott Thomas) can't tell the difference between a shrink and a shop, his eight-year-old son Orlando (Clem Tibber) spray paints his rabbit's name on the walls to get attention, while Orlando's godfather Stephen (Fiennes) lies half beaten to death in hospital. To make things worse Marcus' boss is drawing him into a scam which could cost him his career, his father (Ian Holm) has an illegitimate love child with his former mistress Gloria (Cruz), and his stepmother Penelope's (Harriet Walter) bond with her dogs is his best role model of a loving relationship.

Philoctetes
3.0 out of 5 stars Middling ensemble film with an excellent cast
Reviewed in the United Kingdom on October 21, 2010
Verified Purchase
Given the talent on offer, it's a wonder a film like this might go under the radar. There is a tradition, even a bit of a joke, about these British ensemble movies which seem to contain loads of famous faces, but I was reminded of films like Short Cuts Short Cuts [DVD] [1993 ] (clever) and Magnolia (not so clever), US flicks. There's also a nod to As Good As It Gets, but I won't explain how.

By the way, before watching Chromophobia, I sat through Bergman's To Joy, which also made use of Beethoven's Ninth but to rather more purposeful effect. Despite plenty of misery, it was also more intimate and more uplifting.

The title somehow refers to a work of contemporary art purchased by KST's character, which changes according to environmental stimuli. Or something. Hardly proves relevant or meaningful. You have several characters, most of them quite rich, but one, played by Penelope Cruz, a downtrodden single mum sex worker. They all have various life/career threatening circumstances and bad decisions are made. Mistakes always offer the promise of a new and better start, so the situation isn't hopeless, but it's hard to care much about anyone in this film, with the exception of Fiennes' and Ifans' sensitive characters.

It does look well made, opulent, glossy, not at all grainy or dirty or working-classy, so that makes a change for a Brit flick. One might derive a certain comfort from the fact that ambitious, avaricious, pretentious Londoners are even more screwed up than the rest of us, for all their surface polish.

In short, worth seeing once but insufficiently clever or profound to warrant a second viewing.
Read more
4 people found this helpful
Report abuse

Sarah
5.0 out of 5 stars Almost absurdly relevant for 2012
Reviewed in the United Kingdom on June 27, 2012
Verified Purchase
I found it hard to believe (apart from the wallpaper in some scenes and perhaps the lavish nature of the wealth display) - that this film first appeared in 2003. Not only does it deal with the subject of breast implants (let's hope some misogynistic French company did not glean ideas from this) - but someone has also pointed out to me that in these days the judge at the end WOULD perhaps be able to silence the case against his son with some sort of injunction....(again, let's hope not)...?

Also there are very pertinent questions about the Media and Government members' finances - and I disagree with the viewer who commented here that the two main stories don't seem to overlap at all - it is about juxtaposition and contrast as much as about connection - with the theme of motherhood uniting both.

The soundtrack too is excellent - especially potent the track about being a Hero for Only One Day, and the ironies involved there - tugs between friendship and career/lifestyle.
Read more
5 people found this helpful
Report abuse

Mad in Dorset
5.0 out of 5 stars Ignore the Reviews This is a brilliant film
Reviewed in the United Kingdom on March 14, 2013
Verified Purchase
This is a great film, one I will definitely watch again, probably several times as I feel there is more to be gained from it.

I liked the way it explored modern life, our assumptions and values. It challenges some and reinforces others. Scott Thomas is at her most brittle in places. Fiennes at his most vulnerable. It is not a romantic or thrill- filled film but a thought provoking one.
Read more
4 people found this helpful
Report abuse

R. A. Baugh
5.0 out of 5 stars Five Stars
Reviewed in the United Kingdom on December 3, 2017
Verified Purchase
well played and packed thanks,
Read more
Report abuse

Jean A. Morgan
5.0 out of 5 stars Complex tale
Reviewed in the United Kingdom on May 18, 2014
Verified Purchase
A complicated story - which I bought for Kristin Scott Thomas's participation - so would hesitate to recommend it wholeheartedly..
Read more
2 people found this helpful
Report abuse
See all reviews