Ciao Italia in Umbria and millions of other books are available for Amazon Kindle. Learn more 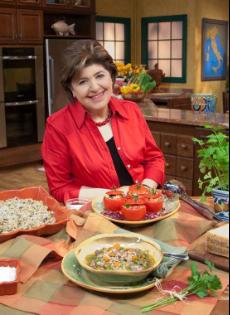 Ciao Italia in Umbria: Recipes and Reflections from the Heart of Italy Hardcover – November 1, 2002

Cookbooks about Tuscan cuisine abound, but the food of its easterly neighbor, Umbria, remains mostly unexplored. Mary Ann Esposito's Ciao Italia in Umbria meets this dearth handily. A "traveling cookbook," it showcases the region's healthy, rustic food while providing a first-person look at its restaurants, home cooks, and singular occupations, like truffle hunting. The core of the book--an offshoot of Esposito's PBS series Ciao Italia--is its 60 easy-to-do recipes, which feature the area's most notable and delicious products, including olive oil, black truffles, farro, and wine. If the relatively few formulas provided leave readers hungry for more, those offered, such as Carp with Rosemary and Fennel and Fava Beans with Olive Oil and Pecorino Cheese, couldn't be more inviting.

The recipes grow from Esposito's narratives. For example, her truffle hunt chapter yields the traditional Penne with Truffles and Cream as well as the more singular Veal with Black Truffle and Strawberry Sauce. Similarly, a section on local female chefs leads to two unusual gnocchi recipes--prune- and zucchini-filled--while one on Umbrian flatbreads offers formulas for oil-fried brustengo, spinach-filled torta sul testo, and a luscious prosciutto pie. Seafood is well represented, as are recipes for the pork delicacies of Norcia, including the delicious Sweet Pork Sausages with Grapes. Readers will also enjoy making sweets like Chocolate Spumone, exemplary strufoli (honey balls), and addictive mezzalune, almond crescent cookies. With an "address book" of outstanding Umbrian restaurants, the book provides a compelling culinary tour of a region too often neglected by cookbooks but, happily, celebrated here. --Arthur Boehm

Host of the PBS cooking series Ciao Italia, Esposito (Ciao Italia Bringing Italy Home) offers only about 60 recipes in her latest collection, but the book succeeds on two levels. First, the dishes from Umbria reflect a simple, rustic fare not overexposed in other Italian cookbooks. Known particularly for its olive oil and truffles, the area in the middle of Italy's boot (bordering Tuscany) specializes in such dishes as Veal with Black Truffles; Pork-Stuffed Celery, an October specialty made for the Festival of Celery and Sausage; and Pork Chops Spoleto Style, which call for kalamata and cerignola olives and dry white wine. Umbrian Ragu Sauce contains ground pork, ground beef and diced ham and requires less than an hour to prepare. Gubbian Flat Bread is made with a scoop of batter poured into a half-inch of hot oil. There is even a Chocolate Olive Oil Cake. In addition to the recipes, Esposito includes 18 personal essays recalling the visit she and her TV crew made to Umbria, when she watched a local cook make pasta, interrupted a farmer tending his garden and witnessed an elaborate race involving likenesses of saints. The brief reminiscences are charming vignettes that enable the reader (even Italophiles who have shelves full of Italian cookbooks) to feel the experience.
Copyright 2002 Reed Business Information, Inc.

Now in its 12th year, Esposito's popular PBS series, Ciao Italia, has spawned a companion volume to this season, which focuses on the province of Umbria, Tuscany's lesser-known neighbor to the east. The recipes are organized by theme, from "Black Truffles for Toscanella" to "Ode to Olive Oil" to "The Fisherman and the Lace Makers," and each section is introduced by the author's stories of her adventures in Umbria and the cooks, gardeners, and others she met in the course of creating the series. Some of the recipes are unusual, and Esposito is as enthusiastic about her beloved Italy as ever. For most collections.
Copyright 2002 Reed Business Information, Inc.

Tuscany has become so overrun with tourists that Umbria now occupies the top spot on lists of Italian provinces for Americans to explore. So, that mountainous land has become the focus of irrepressible television chef Mary Ann Esposito's latest cookbook, Ciao Italia in Umbria. Esposito leaps into her subject with recipes for Umbria's most famous product, the elusive black truffle. Although few readers are going to rush out and buy the luxurious fresh Umbrian truffles Esposito calls for, cooks are more likely to appreciate her less sumptuous recipes. Crisscrossing Umbria, Esposito finds many previously unrecorded dishes: pork-stuffed celery, cabbage rolls, pasta made from the ancient grain farro, and chocolate cake made with the region's prized olive oil. Bakers will want to fire up their ovens for crescia, Umbria's high-rising triple-cheese bread. Mark Knoblauch
Copyright © American Library Association. All rights reserved

"The brief reminiscences are charming vignettes that enable the reader (even Italophiles who have shelves full of Italian cookbooks) to feel the experience."
--Publishers Weekly
Mary Ann Esposito's love of Umbria and its rich culinary traditions shines through on every page."--Nick Malgieri, author of Perfect Cakes

"Mary Ann Esposito has been a pioneer in the world of cooking shows. Ciao Italia is authentic and entertaining, like a great Italian meal, prepared for and eaten with friends and family."--Mario Batali, author of The Babbo Cookbook

Mary Ann Esposito is the host of the public television series "Ciao Italia," now in its twelfth season. She is the author of seven previous cookbooks, including Ciao Italia-Bringing Italy Home. She lives in Durham, New Hampshire.

Start reading Ciao Italia in Umbria on your Kindle in under a minute.

Suzanne D
3.0 out of 5 stars Boring to look through
Reviewed in the United States on April 4, 2013
Verified Purchase
Very few pictures of the prepared recipes, which was a real disappointment to me. Recipes sound good, but who knows, since I can't see what they're supposed to look like.
Read more
2 people found this helpful
Helpful
Report abuse

S. Pace
3.0 out of 5 stars Ciao Italia
Reviewed in the United States on January 10, 2007
I bought this book after seeing Mary Ann Esposito's TV cooking show. We had also recently been to Umbria and had had many great meals. I was disappointed in the book. Not that many good recipes. Some of the items she prepared on the show are very good but the majority are not appealing. I am still looking for a better book on Umbrian recipes.
Read more
4 people found this helpful
Helpful
Report abuse
See all reviews