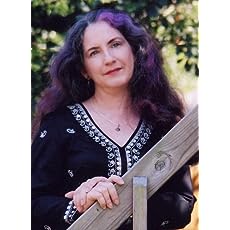 Ciara Gold didn't realize she was a writer until about ten years ago even though the signs had been in place since fourth grade. Luckily for readers, her muse took a skillet to her head and made her realize her true calling. She's been delighting fans with her romantic journeys into the past and the future. Texas born and bred, she makes her home with a loving husband and Newt, the cat. She loves hearing from her readers and you may contact her at ciara_gold@yahoo.com
Read more 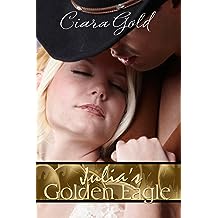 Julia's Golden Eagle Nov 14, 2013
by Ciara Gold
( 4 )
$2.99
When the only daughter of a Brownwood’s local cattle baron allows a stranger to take the blame for a murder she thinks she committed, she orchestrates a jail break.

Jake Nolan knows only one thing; he’s innocent of murder charges and Julia Stanton is the only person who knows who’s really guilty. While Jake holds her captive to discover the truth, Julia’s seductive charms imprison his heart.
Read more 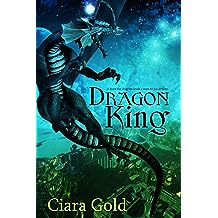 Dragon King (Dragon Series Book 3) Apr 4, 2011
by Ciara Gold
$2.99
Tucker Bolen considers himself a renaissance man of the thirty-first century and balks at society’s rigid cultural practices. After purchasing and using a reincarnation reader, he not only connects with his past entities, he also suffers their bid to surface and claim his soul. A collector and explorer, one of the entities leads him on a quest for dragons and a journey that ultimately leads to the greatest magic - love.

Cari Barock fears many things; never finding love, an assassin bent on taking her life, and dragons. When a stranger from a distant planet arrives, she if forced to face all her fears. With her special Deliphit powers, she helps Tucker with his quest, never realizing that she is the key to unveiling his true powers. Will she sacrifice her heart so he can save her world? 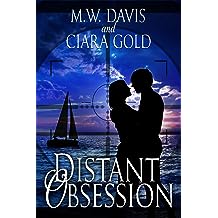 Distant Obsession Aug 3, 2014
by M. W. Davis , Ciara Gold
( 3 )
$2.99
After years struggling to succeed as an artist, Lilah Randal accomplishes here dream, only to return from her first sold out exhibition to find her husband, a US Senator, and his mistress in bed, murdered. With no proof, only suspicious, the police give up pursuing her for the murders, but not the news hounds, nor the discomforting phone calls or late night attempted intrusions into her home.

Reluctantly, Lilah stalls her career, assumes a different identify and begins fresh, hiding in a small town far away from the attention of DC. Her days are filled with new vigor as the serenity of the Cherokee Valley surrounding Watauga Lake feeds her creative muse under a fake alias. Yet her nights remain hollow, like her marriage to the senator, until she becomes obsessed by the allure of a stranger that glides by her cabin in his sailboat. Both his male form and solemn expression bleed into every painting, every midnight fantasy, until her new dream becomes reality. Lilah learns her future will remain corrupted by the past until she solves the secret behind her husband’s murder and explores her attraction to the mysterious sailor. 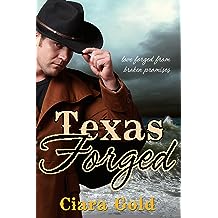 Texas Forged Nov 15, 2013
by Ciara Gold
( 6 )
$2.99
Blacksmith, Galin Walker has an uncanny knack for predicting the weather, but he can’t predict the storm about to invade his heart. Telegrapher, Aubrey Caine’s search for her absent husband leads her straight into the arms of a man with a shady past and secrets that haunt him. Together they forge a bond that will endure the forces of nature and a con man’s cruel swindle.

Texas Forged is a historical western romance that offers a blend of fantasy with real life events.
Read more
Other Formats: Paperback 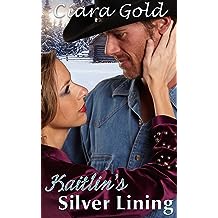 Kaitlin's Silver Lining Nov 14, 2013
by Ciara Gold
( 5 )
$2.99
Kaitlin Kanatzer receives threatening letters that promise dire consequences if she doesn’t stop her suffragist activities. Bent on solving problems on her own without interference, she blocks every attempt Bryce makes to help her. Can she abandon her convictions and open her heart to love?

Bryce Stanton is at his wits end in dealing with his new responsibility. When he becomes guardian to an eleven-year-old hoyden, he seeks help from the girl’s aunt Kaitlin, never realizing the danger he must confront. Through many trials, he discovers more than a desirable woman; he discovers his equal.
Read more 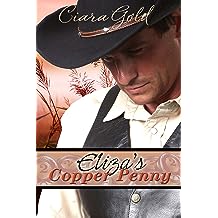 Eliza's Copper Penny Nov 14, 2013
by Ciara Gold
( 6 )
$2.99
When Texas Ranger Copper Reeves goes on the hunt for a suspected murderer, he finds more than he bargains for in the form of schoolmarm, Eliza Woodpen. Copper has a mission, but his efforts are impeded by two young boys who mistake him for a deer.

Eliza has been hiding from a past she'd rather forget, but a chance newspaper article promises discovery from a powerful foe. Salvation comes when two of her students bring a wounded man to her home. Can she open her door and her heart to the man who can unlock secrets she’s held for three long years?
Read more
Other Formats: Paperback 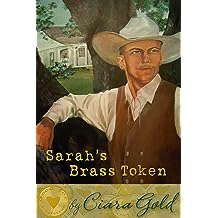 After losing everything to war, Tabor Nolan yearns for family and a home. A chance meeting with Sarah prompts Tabor to make decisions that threaten her independence. Will she allow this stranger into her life and into her heart?
Read more
Other Formats: Paperback 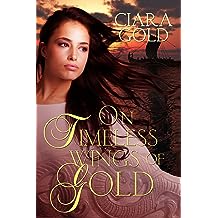 On Timeless Wings Of Gold Nov 7, 2011
by Ciara Gold
( 1 )
$3.99
They say an eclipse yields a powerful force, an energy that can be harnessed by those with magic in their souls. On such a day when the sun disappears behind the shadow of the Earth, a mighty wizard evokes the elements of nature. With ancient, Celtic incantations, he sends an angel upon the wings of time to tempt a fallen king.

Angel Cashion is struggling to make ends meet and saving for when she can own her own repair shop in hopes of fighting her ex for custody of their daughter, but she is whisked away from home by a quirk of fate. Torin O’Faelain has spent the past two years enslaved by Vikings. A man of strong principles, Torin is committed to finding his way back to his native land and nothing will stand in his way, not even an angel from the future, but love and fate intervene. 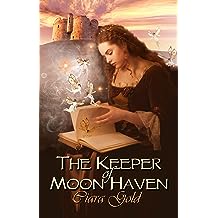 The Keeper Of Moon Haven Dec 1, 2010
by Ciara Gold
( 5 )
$3.99
On the southern fringes of the Mendip Hills sits the Castle Hamingjur, an abandoned structure most fear haunted. Yet, on the rare occasions when the Hunter’s Blue Moon occurs, the Keeper occupies this mysterious castle where he guards the bridge to Alfheim Haven.

Noreen Willshire discovers more than fairytales hidden between the pages of Beletania’s diary. She opens the ancient book and finds a pathway to a Faery Realm where all manner of mythical creatures reside. In her naïveté, she summons the Keeper before his scheduled time in the human realm. In that brief moment, the mysterious wizard touches her soul with more than magick. She promises to return the diary during Mefylleth, a time when the barriers between the two realms melt away, but danger stalks her path. Torn between her desire to make a new life for herself in America and her growing love for the Keeper, she must bridge the gap between magick and time to follow her heart. 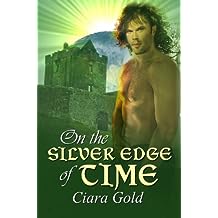 On The Silver Edge Of Time Aug 1, 2009
by Ciara Gold
( 1 )
$3.99
Viking Erik Lotharsson is sent forward in time to find the mate his people have chosen. He has no idea the journey he travels will be one of heart and soul. Nor can he imagine the trials he must face in taming a modern woman to his point of view. Keelin Haverland has experienced dreams of a Viking lover for several years and fixates her attention on an acquaintance with a striking resemblance to her dream lover. She soon discovers her dreams are of another, of a man who claims to be from the past. The magic of an eclipse transports her to another time where modern conveniences no longer exist, and love is but a heartbeat away.
Read more
Other Formats: Paperback , Mass Market Paperback 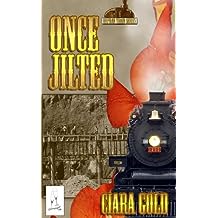 Once Jilted (Orphan Train Book 4) Mar 1, 2008
by Ciara Gold
( 3 )
$3.95
Shauna Joyce has three weeks to find a husband or face watching a special little girl fall into the hands of loveless parents. An orphan herself, she knows the heartache of growing up without love. Armed with a need greater than her own, she finds a likely candidate in bridge-builder, Kane McKenna. Kane McKenna has one goal; to finish the bridge he's erecting so he can earn the capital needed to start a business of his own. A wife and child would drain his finances, so when Shauna Joyce proposes marriage, he balks at the idea. Will her determination be enough to build the bridge of trust needed to make him trade one dream for another?
Read more
Other Formats: Paperback 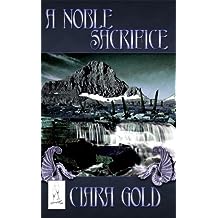 A Noble Sacrifice (Dragon Series Book 2) Mar 30, 2007
by Ciara Gold
( 2 )
$3.99
Fen Tared Charst has betrayed his brother, and his people. To right the wrongs he’s done, he suffers the horrors of the zeel pits only to find himself a captive of the Temi tribe. In Yalfar, he discovers that leading the Temi princess and her warriors from their dying world is the key to his redemption. But losing his heart to Princess Joyella will be the key to saving his soul.

Princess Joyella Denue has broken a sacred law and for that, she is exiled from Yalfar. To regain her honor, she agrees to lead a convoy topside to escape the collapsing city, but she can’t make the journey alone. She needs someone who has traversed the path to guide her. Tared is forced to help her, but he soon becomes more than just a guide, he becomes her heart.