Cija Williams was born and raised in Rockford, Illinois. A shy girl for most of her youth, she often would write her inner most emotional feeling out in poetry. Throughout her life she has overcome many trials that were often hidden to the outside world. Depression, molestation, abandonment issues are just a few of the tests that were hers to bare. Today as a mother herself, Cija finds herself often the voice of encouragement and modeling perseverance. Cija says, "I believe that each day is just a blank page in your book, it is up to you to decide the direction of your story". Since embracing her writing journey and becoming published, Cija has launched into becoming a publisher to assist the next shy girl or boy with sharing their creative journey. 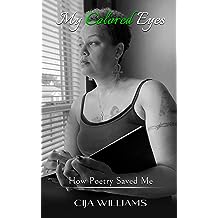 A personal account of how the gifts hidden deep within surfaced at the perfect time to save a young girl from drowning in misery. Writing poetry allowed the author to release the aches, pains and downright turmoil during her life. Have you experienced:

None of these things can hold you when you release them into the universe. Placing the words on paper is such a liberating journey so let's take a spin TOGETHER!