You've subscribed to Santa Fe Café Mystery! We will preorder your items within 24 hours of when they become available. When new books are released, we'll charge your default payment method for the lowest price available during the pre-order period.
Update your device or payment method, cancel individual pre-orders or your subscription at
Your Memberships & Subscriptions
There was an error. We were unable to process your subscription due to an error. Please refresh and try again. 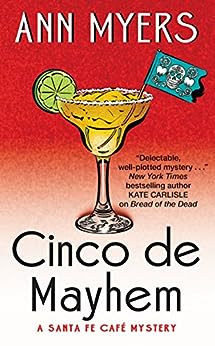 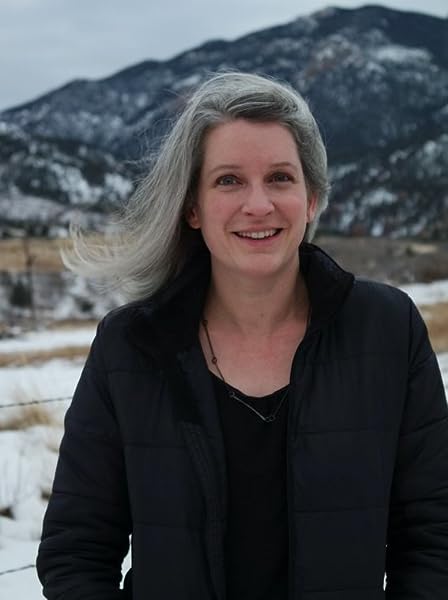 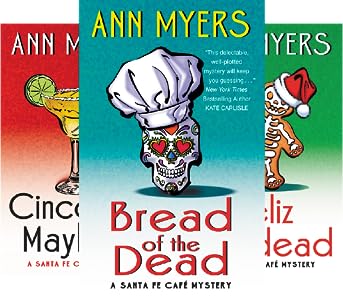 Tres Amigas Café chef Rita Lafitte is busy baking her green chile soufflés and chocolate flans for Cinco de Mayo. If only her friend Linda, the daughter of Rita’s octogenarian boss Flori, could get into the festive spirit. Linda’s cart, Tia Tamales, is losing business to Crepe Empire, the hottest food cart in Santa Fe. Napoleon, Crepe Empire’s owner, is a pompous, celebrity chef who wants to squeeze out the competition. But when Linda gets into a heated argument with Napoleon and his corpse is later found stabbed and pinned beneath the wheels of her tamale cart, she becomes the number one suspect.

Determined to prove Linda’s innocence, Rita investigates. From Napoleon’s disgruntled former employees to a shady health inspector, the list of suspects is longer than Flori’s strings of dried chili peppers. And when another corpse surfaces, Rita must scramble to find an elusive killer with an appetite for murder…

Ann Myers has created a delectable new mystery series set in the fascinating world of Santa Fe, New Mexico. With a smart, sympathetic heroine, a melange of quirky characters, a delicious array of tantalizing food, and intriguing bits of Old World folklore, this wonderful, well-plotted mystery will keep you guessing right up to the final page.

Ann Myers, her husband, and extra-large housecat live in Colorado but, like Rita, feel most at home in Santa Fe.

C. Joy
5.0 out of 5 stars Kept me reading even when I *should* have been doing other things!
Reviewed in the United States on May 24, 2016
Verified Purchase
This is the second in Ann Myers' "Santa Fe Cafe" series. I've read them both and loved them! The main character, a middle aged mom who likes to cook and sleuth, is endearing, smart, and funny (though she probably wouldn't describe herself as such). The mystery is good as well. I'm never very good at guessing who did it, but I COMPLETELY got this one wrong! This book kept me coming back to pick it up even when I should have been doing other things, and I enjoyed it all the way through. A fun read, and I certainly hope more of Myers' books are on their way!
Read more
One person found this helpful
Helpful
Report abuse

sam cathey
5.0 out of 5 stars A foodie and Santa Fe
Reviewed in the United States on March 18, 2021
Verified Purchase
Memorable characters, set in beautiful Santa Fe, plot salted with the flavors of the region and a murder mystery too. What more could a traveling foodie hope for.
Read more
Helpful
Report abuse

Karen B
4.0 out of 5 stars Cinco De Mayo cozy mystery
Reviewed in the United States on May 6, 2016
Verified Purchase
Of course when I saw this book available on May 5, I had to grab a cozy that celebrated the day. Rita is the chef/sleuth who is trying to find out who killed Napoleon the owner of the Crepe food cart because Rita's friend Linda who owns the Tamale cart is accused of the murder. I liked that this book kept me guessing right to the end who the killer was and I was surprised. The mention of all the delicious Mexican food will have your mouth watering while you read.
Read more
Helpful
Report abuse

Cyn
5.0 out of 5 stars Love This Series
Reviewed in the United States on May 26, 2017
Verified Purchase
Rita and Flori are back in the second book of this terrific series for more adventures in sleuthing. Love this duo and love the world Myers has created in this series. The setting and food are both described beautifully, the characters are super fun, and the voice is so engaging.
Read more
Helpful
Report abuse

Laura Hansen
4.0 out of 5 stars Santa Fe locales
Reviewed in the United States on December 8, 2020
Verified Purchase
As a resident of New Mexico, living in spitting distance of Santa Fe, I love this novel’s references to local places. Definitely a lighthearted, easy read that is just right at the end of a grueling workday.
Read more
Helpful
Report abuse

Amazon Customer
3.0 out of 5 stars Santa Fe is a great place for mysteries.
Reviewed in the United States on May 2, 2016
Verified Purchase
It was a fun quick read. Nothing spectacular but I've read two of her books now and will probably get another one. I love mysteries and these are good enough to keep my interest.
Read more
Helpful
Report abuse

Zora
2.0 out of 5 stars Two Stars
Reviewed in the United States on July 18, 2016
Verified Purchase
Way too simplistic for my taste.
Read more
One person found this helpful
Helpful
Report abuse
See all reviews

KS
5.0 out of 5 stars Another delicious romp from Anne Myer
Reviewed in Canada on April 6, 2016
Verified Purchase
Rita is back with more adventures with New Mexican flavouring. The characters are delightful and the plot entertaining! An added bonus is the collection of recipes for the dishes mentioned in the book! A fun read!
Read more
Report abuse