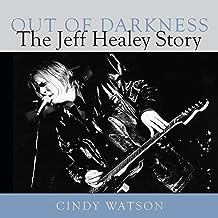 Short-listed for the 2011 Golden Oak Award

From the moment three-year-old Jeff Healey first laid a guitar across his lap in what was to become his signature style, it was clear he was no ordinary kid. Losing both eyes to retinoblastoma, a rare form of cancer, opened a door to another world for Jeff, a newly adopted infant. Out of darkness he created music, becoming one of the most influential blues-rock and jazz performers of our time, beginning with his first hit album, See the Light.

In this up-close and personal account, loaded with never-before-seen photographs, memorabilia, and intimate recollections of family, friends, and fellow musicians, we discover this unique music icon’s dynamic career, which saw him collaborate with everyone from George Harrison and Eric Clapton to B.B. King and Stevie Ray Vaughan. From Jeff’s lonely start one snowy night at St. Joseph’s Hospital in Toronto to his untimely end in the same building, we come away with a potent message of empowerment and a renewed sense of hope.