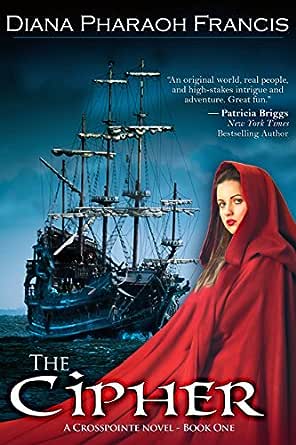 You've subscribed to A Crosspointe Novel! We will preorder your items within 24 hours of when they become available. When new books are released, we'll charge your default payment method for the lowest price available during the pre-order period.
Update your device or payment method, cancel individual pre-orders or your subscription at
Your Memberships & Subscriptions
There was an error. We were unable to process your subscription due to an error. Please refresh and try again. 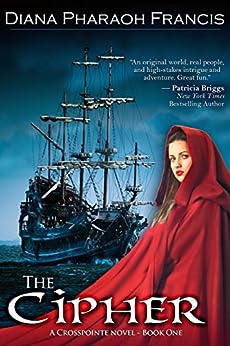 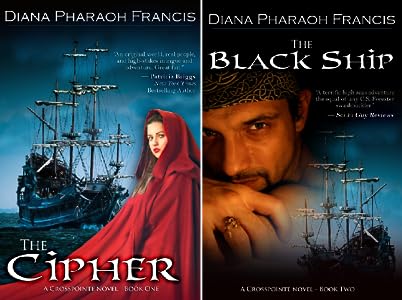 Bestselling writer Diana Pharaoh Francis has written several popular fantasy series. The Path trilogy, which includes Path of Fate (nominated for the Mary Roberts Rinehart Award), Path of Honor and Path of Blood, is epic fantasy. She has also written the Crosspointe Chronicles, including The Cipher, The Black Ship, The Turning Tide, and The Hollow Crown. She also writes The Horngate Witches series, Bitter Night (nominated for the RT Best Urban Fantasy 2010), Crimson Wind (Nominated for the RT best Urban Fantasy Heroine, 2011), and Shadow City (a Top Pick at RT), and Blood Winter. Her latest series is the Diamond City Magic books, beginning with Trace of Magic, which also earned an RT top pick and a nomination for Best Independent Urban Fantasy novel. The second book is Edge of Dreams, also a RT Top Pick, also nominated for Best Independent Fantasy Novel. Whisper of Shadows is the third book in the series. Diana has also launched the Mission: Magic series with the short romantic paranormal novel The Incubus Job.

4.0 out of 5 stars
4 out of 5
46 global ratings
How are ratings calculated?
To calculate the overall star rating and percentage breakdown by star, we don’t use a simple average. Instead, our system considers things like how recent a review is and if the reviewer bought the item on Amazon. It also analyzes reviews to verify trustworthiness.
Top reviews

mabg
5.0 out of 5 stars a strong story
Reviewed in the United States on September 14, 2018
Verified Purchase
Starts with a bang and doesn’t let up. I like Lucy, the female lead. She’s bright, abrasive, lacks confidence in unexpected ways, but she’s also strong, loyal and determined to fix her mistakes. Marten was harder to like, as he began the book as a self-indulgent whiner blaming other people for his mistakes and getting people hurt because he wanted to believe nothing bad would happen to anyone from his doing a very bad thing. The worldbuilding was fascinating, as was the magic system, and I hope later books say more about Crosspointe, its founders and why things work there the way they do. The politics are also interesting, given the royal line is caught up in a Chancery suit that means they have to work to feed themselves. Unlike some other readers, I had no issue with the motivations of the Crosspointe villain. He was just looking out for himself, enjoyed amassing wealth, power over other people, and hurting anyone he felt like. It’s a classic villain personality, there are people just like that, and I didn’t need him to have a stronger or “more believable somehow” motivation or for making the choices he did. The writing was sharp, the plot flowed and the story wrapped up with a real ending and threads to carry on into the next book—which I’m buying now.
Read more
Helpful
Comment Report abuse

BVE
5.0 out of 5 stars Incredible story, intriguing world
Reviewed in the United States on July 21, 2014
Verified Purchase
I found this book because a friend of mine posted a contest on Facebook to win a copy of this re-issued story. The cover, alone, had me interested, then I read the description. I downloaded it and aboslutely love it!

Lucy Trenton's ability to sense majick is one of her most dangerous secrets. But only one.

A blackmailer knows the other.

Suddenly, Lucy is caught in a treasonous plot to destroy the crown, and she's trapped in the tentacles of a desperate, destructive majick. Her only hope is ship captain Marten Thorpe, who--by every account--cannot be trusted. With time running out, Lucy must find a way to win a dangerous game or lose everything she holds dear.

The world created by Francis is unusual and complex. She takes Lucy through the highs and lows of society and the reader goes right with her. I fell in love with the characters and their loyalty, or lack thereof, to each other. When in need, Lucy finds herself reliant on the help of some surprising people. You wouldn't think a cousin to the king might need help from odd parts of society, but when the stranger's blackmail efforts ruin her reputation and set her up to die on the Bramble, she has nowhere else to turn.

This story will surprise you with its shifts and turns, but it's entertaining through and through. I can't wait to read EVERYTHING else written by Diana Pharoah Francis.

One thing I didn't like was the excruciating pain and disfigurement the main character endured (over and over again) – it was over the top, and unbelievable that a person could survive ALL of that. It was almost painful to read . . .
Read more
Helpful
Comment Report abuse

S Graham
4.0 out of 5 stars Great Read!
Reviewed in the United States on December 2, 2010
Verified Purchase
I read all three of the Path series written by Diana Pharaoh Francis and I see in this book the same thing that I noticed in the first book of the other trilogy. The beginning has foreign words that come from this new world that can cause the reader to have a hard time getting into the book. That said, those who stick with it will be sucked in to a great plot with turns and twists and surprising friendships. Once you get into it you can't put the book down. I can't wait to read the rest of the series and just ordered them all off Amazon.com a few minutes ago.
Read more
One person found this helpful
Helpful
Comment Report abuse

Mr. Thomas A. Mckewen
4.0 out of 5 stars Good read for anyone who likes adventure/fantasy with a bit of a seafaring backround and if you like excellent worldbuilding
Reviewed in the United States on November 19, 2014
Verified Purchase
Cool start to a series. This is a mix of magic and political intrigue. The world building is unusual at first but builds as the book progresses. It is well written and the plot flows nicely. Both the heroine and the hero are flawed and their character develops through their mistakes and misunderstandings.

Reading Reading Read
4.0 out of 5 stars A very interesting world and vividly imagined.
Reviewed in Australia on January 11, 2015
Verified Purchase
An interesting plot if a bit plodding you can see the ending come from a while out and the author has a bad habit of fore shadowing most of the plot points pretty heavily. Still the characters are enjoyable if formulaic, and they could certainly have stood to be a bit more likable. Despite these short comings i enjoyed the tale and by the end i found the characters did not grate on me.

MY single biggest complaint is that there are a lot of plot holes that are not filled in by the second book in fact the sequel is a very different novel and that might suite you well but be fore warned.
Read more
Report abuse

CP
1.0 out of 5 stars Cannot finish the book!
Reviewed in Canada on August 1, 2015
Verified Purchase
Cannot finish the book, I just delete it from my device only after a few page because I cannot relate to the main character or the story.
I made a big mistake when buying this book.
Read more
Report abuse

Professional BookWorm
5.0 out of 5 stars Please stock the next episode
Reviewed in the United Kingdom on March 15, 2008
Verified Purchase
I really enjoyed this book as Lucy is a very interesting character and she makes you want to keep reading to find out if she survives. Captain Marten Thorpe is also interesting as a tortured & flawed character.
I read this in 2 days and can't wait for the next book "The Black Ship"

The action keeps going at a steady rate
Francis is a good author and I'll watch for all her new books.
Read more
6 people found this helpful
Report abuse
See all reviews