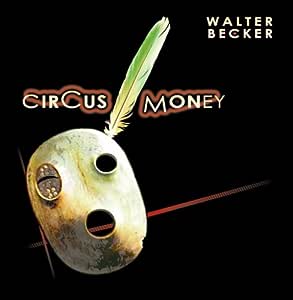 It's been 14 years since Steely Dan co-founder Walter Becker's last (and first) solo album was released. Now, at long last, the wait is finally over for the second. Circus Money finds Becker's sardonic sensibility completely intact and each of the album's songs, inflected with jazz, reggae, and rock phrasing, is a masterpiece of musical understatement and lyrical nuance.

4.3 out of 5 stars
4.3 out of 5
116 global ratings
How are ratings calculated?
To calculate the overall star rating and percentage breakdown by star, we don’t use a simple average. Instead, our system considers things like how recent a review is and if the reviewer bought the item on Amazon. It also analyzes reviews to verify trustworthiness.
Top reviews

Bobby Brown
5.0 out of 5 stars Essential Listening for the Strong of Mind
Reviewed in the United States on September 6, 2017
Verified Purchase
Good old Uncle Walty had stories to tell, and he told them in a way that the old Steely Dan moniker didn't always "cover," to say the least. This collection features a craftsmanship of composition, performances by the (hands down) very best artists alive, and production by the most stellar figures working in recorded music today. Circus Money has the feel of a literary piece that pays dividends with repeated listening.

Though the man no longer spends his days on the planet, it's a joy and a privilege to hear his voice and share his vision in his absence, again and again. Selah.

Scott HedegardTop Contributor: Rock Music
5.0 out of 5 stars Walter Becker shows us he's a genius too
Reviewed in the United States on September 10, 2014
Verified Purchase
After the first hiatus of Steely Dan after the "Gaucho" album, a superb and even prophetic view into what would become the ultra excessive '80's mentality, it appeared we wouldn't hear from either Donald Fagen or Walter Becker any time soon, maybe ever. Then Fagen released "The Nightfly", his first solo album that sold as well as any Steely Dan album and contained a huge hit with "I.G.Y." Some skeptics began to wonder just what Becker had contributed besides bass on Steely Dan albums. Fagen was always adamant about Becker's contributions, and perhaps it was the release of Walter Becker's first solo "Eleven Tracks of Whack" and the followup, "Circus Money" that erased any doubts about his own genius and indelible part of the Dan sound.
I have yet to get "Eleven Tracks of Whack", which I will, but meantime I'm totally impressed with "Circus Money", a crisp, extremely catchy and intelligent album featuring many members of the Steely Dan touring band, who are of course top notch all the way, including the steamy female vocals of "Two Doors Down", the lyrically puzzling "Bob Is Not Your Uncle Anymore", showing us that Becker was the madman behind the twisted Steely Dan lyrics, and a sound that starts out mainly in the familiar jazz rock mode but morphs toward a smooth reggae touch for much of the second half of the CD. Given Becker's limited understated vocal range, it suits the songs fine, and we get vocals that deliver a punch in a velvet glove.
There isn't a bad cut on the album, and is a must for all Steely Dan fans. Walter Becker gives us tasty blues guitar and bass and just plain steams. No Andrew Ridgely, John Oates or other second banana partner here. Live and solo, we now understand just how much Becker has given to us, and the astonishing musical acumen between him and Fagen, truly one of the most compatible songwriting partnerships ever. After their current tour, it would be wonderful to have a new Steely Dan album. I sure hope we get to hear more music from one of my personal favorite bands ever in the near future.

Raoul
4.0 out of 5 stars The Late Walter Becker
Reviewed in the United States on September 11, 2018
Verified Purchase
As far as I know, Walter Becker released only two solo efforts. This, his second, definitely shows the discerning Dan fan the source of the reggae/ Caribbean-soaked influences displayed in their late offerings. Although not as arresting on first-listen as "11 Tracks of Whack," and not as stylistically free-ranging, its depth is revealed in repeated listenings, and it's well-worth the price of admission. The Becker dark lyricism is on high-display here, and the production values are just what you'd expect from a Dan album. Highly recommended for steeped-in-Steely Dan fans.
Read more
4 people found this helpful
Helpful
Report abuse

D. Morriss
5.0 out of 5 stars People We All Know
Reviewed in the United States on June 23, 2012
Verified Purchase
This music has some of the 'Dan quality of it... of course it does... but there's something raw and painful about Becker's portraits of people and circumstances that help me understand where a good deal of the Dan depth came from. The people and circumstances may not be day-to-day familiar on the surface but they're us, each and all. How many folks don't feel a deep unredeemable grief at how you've treated someone? I have an Audrey I wish I could page. I've been someone's Saturday Night. Felt the bleakness of losing Bob as my Uncle more than once. I thank Becker for the clarity.

Couple this with masterful music and mixing and this is an album I return to again and again. A small masterpiece.

N
5.0 out of 5 stars phenomenal album
Reviewed in the United States on September 7, 2008
Verified Purchase
I was blown away by this album. I enjoyed 11 Tracks of Whack but not as much as Fagen's first two solo efforts. Hence I mistakenly was led to believe that Becker was somehow not as genius as Fagen. This album proved me wrong twice over. Spectacular album. Many have mentioned the originality (or novelty as some more cynically put it) of the songs (reggae) but what has impressed me the most is the quality of the lyrics. Amazing.

My faves: Downtown Canon, Darkling Down, God's Eye View, Bob is Not Your Uncle Anymore

If your a SD fan, there should be no need to recommend this album. And if you're not, then you should be.
Read more
7 people found this helpful
Helpful
Report abuse

tao man
5.0 out of 5 stars This is a great record from an under-rated artist
Reviewed in the United States on December 15, 2012
Verified Purchase
Donald Fagen gets all the attention in Steely Dan, it seems. His solo records are killer. However, Becker is a greater songwriter and singer in his own right. This record is amazing. If you give it a chance, don't expect it to sound like Steely Dan or Donald Fagen, and listen deeply to the harmony, melody and lyrics, you'll be rewarded with a great experience. This is one of the best records I've heard in the last few years.
Read more
11 people found this helpful
Helpful
Report abuse

George
4.0 out of 5 stars Best album this year
Reviewed in the United States on July 13, 2008
Verified Purchase
This album makes clear that Becker was the main talent in Steely Dan and one of the leading musical talents of the last few decades. It fuses jazz, reggae, pop, rock and great lyrics in amazingly rich and well balanced arrangements. Listen to it loud on a good stereo to really appreciate what Becker accomplished. I dropped one star because the songs in the middle (including the title track) are throw aways and the melodies don't have the punch of Steely Dan at its best.

The reviewers who criticized the album for aping Steely Dan and not trying something new just don't get what is going on here. The album explores the richness of the Steely Dan style and Becker's truly unique gift for lyrics. He can't "ape" himself.
Read more
6 people found this helpful
Helpful
Report abuse
See all reviews

Trix
5.0 out of 5 stars An absolute Treasure
Reviewed in the United Kingdom on November 6, 2012
Verified Purchase
I've been a fan for nearly forty years and when I received this album yesterday thought I would give it a listen on the way home in the car.

Have to say that it took a long time to warm to his previous solo CD Eleven Tracks of Whack but I did eventually. So when I put Circus money into the CD player I had mixed feelings. I am pleasantly surprised by this album and yes I will be listening again on the way home. Some great tracks and some excellent tracks.

As a previous reviewer said late to the party, but better late than never.

Mr Becker you are a genius and long may you reign.
Read more
Report abuse

Mr. David A. Norris
4.0 out of 5 stars A solid offering to the Steely Dan opus
Reviewed in the United Kingdom on March 28, 2011
Verified Purchase
This is a very good disc in the familiar Steely Dan style of sophisticated Jazz Rock. The songs have excellent lyrics, the playing is all of a very high standard. I found this a lot easier to like than the first Walter Becker disc, and it is certainly not a case of it being more superficial as I still find this a disc of enduring appeal.
Read more
Report abuse

t m boland
4.0 out of 5 stars For true Dan fans
Reviewed in the United Kingdom on April 1, 2015
Verified Purchase
Not as good in my view as 11 tracks of Whack but maybe it needs a few listens
If you wanted to buy one of the 2 WB albums then go for Whack
Read more
Report abuse

Amazon Customer
5.0 out of 5 stars Lost Gem Uncovered
Reviewed in the United Kingdom on April 24, 2015
Verified Purchase
A brilliant 'lost' album in the style of Steely Dan. A little bit of reggae under the excellent production of Larry Klein. A top album original released in 2007.
Read more
Report abuse

A. J. Wallace
5.0 out of 5 stars genius
Reviewed in the United Kingdom on September 26, 2013
Verified Purchase
Quite simply - a genius album - upside looking down - Walter is a genius
This and 11 tracks of whack are my desert island discs
Read more
One person found this helpful
Report abuse
See all reviews