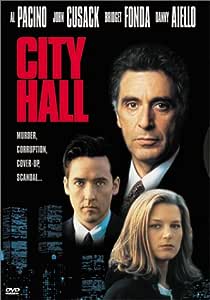 4.4 out of 5 stars
4.4 out of 5
254 global ratings
How are ratings calculated?
To calculate the overall star rating and percentage breakdown by star, we don’t use a simple average. Instead, our system considers things like how recent a review is and if the reviewer bought the item on Amazon. It also analyzes reviews to verify trustworthiness.
Top reviews

Mr. Potter
5.0 out of 5 stars Great movie from a Simpler Time
Reviewed in the United States on November 8, 2020
Verified Purchase
Does anybody remember when lying used to be enough to get a politician in trouble? Well I guess I'm dating myself but in this delightful film you can reminisce about a simpler time when integrity meant something. My but that seems like a long time ago. Anyway....

Director Harold Becker brings to life this engaging story set in a rainy / gritty New York City that is populated bya mélange of characters you would love to hang out with. Somewhat of the the "LA Confidential" ilk, City Hall has a big, strong cast. A compelling narrative with lots of twists and turns, but not so obtuse that you have to hang on every word. A story about good and evil where yes, you want the good guys to win - but the bad guys are so much fun you'd love to find yourself in acorner booth with a few of them one night, sipping a beer and listening to their many entertaining colorful stories.

I like this role for Pacino. There's lots of room here for him to do his thing, but he does not go over the top a la Scarface. If you are a Pacino fan (and who's not?) you know that he often has a set piece in his films. A scene where he takes center-stage to make a "speech" that might not turn out too well. (You're out of order!) But as he gathers his thoughts, and finds his voice, and pulls the crowd along with him - he pulls the skeptics into his corner and propels the story to the next level. No exception here. He does it here with almost religious fervor which you will enjoy in the exposition of the film.

Pacino is supported by a great cast. Danny Aiello. Martin Landau. Tony Franciosi. Bridget Fonda in one of her better roles and John Cusack, not always one of my favorite actors, who turns in a great performance and plays a pivotal role the ties the story together, as you will see. Big sweeping score by Jerry Goldsmith with some melodic themes that will stick in your head, in a most delightful way.

Harold Becker he seems to have had a couple big films during the late 80s and early 90s including Sea of Love - but then appears to have fallen off the map. One credit that jumped out at me was The Onion Field (1979) which was not a huge movie, but WAS written by Joseph Wambaugh, who I consider to be the Godfather of the Modern Police genre. If you are not familiar with this work... look him up.

City Hall is a delightful popcorn movie that will take you for a tour through the neighborhoods of New York City and these machinations of the Political Machine back in the day. Back to when integrity still mattered, sometimes. That's what City Hall is all about, as you will be delighted to discover.

Perry Terrell
5.0 out of 5 stars Modern depiction ofTammany Hall
Reviewed in the United States on July 30, 2014
Verified Purchase
Great acting by some fine actors. Great story, great gut wrenching drama and suspense. Somebody tell me why they do not give John Cusack an oscar. He is going to be the next Kirk Douglas of actors that give fantastic acting jobs and never even get nominated. I guess they will wait till he is seventy and give him an honorary lifetime achievement oscar like they did Kirk Douglas. Great supporting actors including an intense Danny Aiello.
Read more
2 people found this helpful
Helpful
Report abuse

pjy
4.0 out of 5 stars Loosely based on actual events.
Reviewed in the United States on June 9, 2018
Verified Purchase
Embellished, but based on actual events, this has good performances, particularly by John Cusack.
Do a search for Donald Maness.....
Read more
One person found this helpful
Helpful
Report abuse

L. Aiello
4.0 out of 5 stars Al Pacino, John Cusack, and Danny Aiello are great!
Reviewed in the United States on November 26, 2003
Verified Purchase
This is one of the best crime-drama movies during the late 1990s. It was filled with a great cast, a huge storyline, and many of the players involved gave great performances. Pacino was great; he should have been nominated for something. John Cusack was good too, as long as the viewer doesn't mind his Louuu-siana accent. He may come off as annoying if you can't stand this dialect. The way that Pacino's character interacted with Cusack's character was believable, dramatic, and slightly comical at times. Danny Aiello was superb as always. David Paymer was great in a supporting role. Bridget Fonda was good but not memorable.
There were times when this picture mentioned so many characters, probably too many. It may take a second viewing to remember, "which Zapatti was which?" After so many cross-references, one has to stop and think just to recap.
The ending didn't have a lot of sting. It was built up for so long in a good way and then was a little bit of a letdown. This was one of the few letdowns in the film
I think that since the movie wasn't billed as a huge, blockbuster big screen hit, it made some forget that this movie even existed. Pacino was great but the film's lack of "splash" in the theaters may have accounted for no nominations. It was semi-successful in the home market, and viewers are still learing that this title is out there. Made in 1996, it still stands up seven years later and should still be popular for many years from now.
So, make yourself some lemon pudding (you'll see) and rent this movie! Overall, a great picture.
4 ½ out of 5!!!
Read more
20 people found this helpful
Helpful
Report abuse

loner
5.0 out of 5 stars you'll want to see this
Reviewed in the United States on March 3, 2020
Verified Purchase
Fine subject well done writing and acting sometimes Al goes a bit over the top but still a neat film
Read more
Helpful
Report abuse

Mae Tinee
3.0 out of 5 stars Al Pacino at his loudest
Reviewed in the United States on June 19, 2014
Verified Purchase
Is there ever a movie in which Al Pacino does not yell at the top of his lungs? I guess he does this due to his lack of statute. Not an overly exciting movie. John Cusack dream walks through this "drama". The supporting cast is adequate. Danny Aiello is a politician, who the outfit feels is expendable, so, Danny whacks himself. Not much here.
Read more
Helpful
Report abuse

Therese D. Scoles
5.0 out of 5 stars Cusack!
Reviewed in the United States on January 25, 2014
Verified Purchase
Pacino? Nah-- Cusack gets the nod in the this one-- his character is running the show and it is good to see Cusack's more serious side (of course this humor is blended in as well!) If you collect his movies...you should have this one.
Read more
Helpful
Report abuse
See all reviews

baby
4.0 out of 5 stars CITY HALL
Reviewed in the United Kingdom on November 5, 2010
Verified Purchase
I just love Al Pacino so try get all his movies. Not one of his best movies but if you love Al Pacino anything of his is good. Al Pacino re-teams with Sea of Love director Harold Becker, as New York Mayor John Pappas, in the City Hall. A thriller taht's the first film ever shot inside the lover Manhattan structure which is ground zero for the city's government. There is Murder, corruption, cover up and scandal in this movie. I did enjoy it and the actors are really good. If you love Al Pachino you would love the movie.
Read more
4 people found this helpful
Report abuse