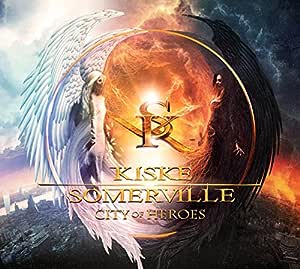 The newest chapter of the collaboration between vocalist Michael Kiske (ex-Helloween, Unisonic, Place Vendome) and singer Amanda Somerville, City of Heroes, is a major step forward from their debut. Kiske s soaring vocals blended with the haunting vocals from Amanda and production and songwriting from Mat Sinner (Primal Fear, Sinner) and songwriting from Magnus Karlsson (Starbreaker, Primal Fear) create an over the top Melodic Metal masterpiece.

4.6 out of 5 stars
4.6 out of 5
83 global ratings
How are ratings calculated?
To calculate the overall star rating and percentage breakdown by star, we don’t use a simple average. Instead, our system considers things like how recent a review is and if the reviewer bought the item on Amazon. It also analyzes reviews to verify trustworthiness.
Top reviews

Boomer
4.0 out of 5 stars Impressive combination
Reviewed in the United States on July 23, 2020
Verified Purchase
I've been a Kiske fan for years so that was enough to make me buy this album. Hadn't heard of Amanda Somerville previously but I'm officially a fan now. Album kicks off strong with City of Heroes and Walk on Water being two of the best offerings here. It's a nice blend of straight up rock, speed metal and a couple of slower songs like Ocean of Tears. Vocals are outstanding and compliment each other very well. I'll be checking out their previous album as well as looking for what else Amanda Somerville has done. Great stuff
Read more
Helpful
Comment Report abuse

GillianS
5.0 out of 5 stars ANOTHER triumph for two great singers!
Reviewed in the United States on January 24, 2017
Verified Purchase
ANOTHER triumph from two great singers, Amanda Sommerville and Michael Kiske! Great songs, crunchy guitar, and a fabulous GAL drummer, man this kills, easily as good as the first one, if not better. Many of these team-up "project" CD's lack any personality, they're just for the dough, but this is great, I have Amanda's last solo thing, she's a titan, in a world of way too many TARJA clones, you know WHO I mean, Ms. Sommerville has carved out her own place, in either this, her own stuff or with AVANTASIA, and of course, TOBI knows great singing, so I can heartily endorse this,
Read more
Helpful
Comment Report abuse

Jose M Fernandez
5.0 out of 5 stars Absolutely Amazing!
Reviewed in the United States on January 9, 2019
Verified Purchase
This Album has the classic 1980's melodic metal sound. The voices, guitar riffs, and drumming are second to none. Def Leppard's Pyromania album is considered one of the best albums of all time. I would rank this City of Heroes album in the same stratosphere. If you like 1980's metal, then this is definitely one album that should be part of your collection.
Read more
Helpful
Comment Report abuse

mark wolfgram
4.0 out of 5 stars Flip a coin. Solid follow up but, not as heavy.
Reviewed in the United States on September 19, 2017
Verified Purchase
Not as solid as the first album. More polish and a bit tamer in the songwriting. I found myself slightly disappointed after the glowing reviews called this album superior to its predecessor. Don't get me wrong the trip is worth taking and I am not knocking the quality of this album, I would start with the first release if given the choice between the two as it seems a bit harder and that is what I prefer.
Read more
Helpful
Comment Report abuse

Me.Greedy
5.0 out of 5 stars A Fantastic Second Album
Reviewed in the United States on September 2, 2015
Verified Purchase
i'm no music buff, but i do know a great CD when i hear one... and this one is great.

the first album was a joy to listen to, but i find myself playing this one much more than i ever did of the first, so kudos on skipping the sophmore slump... so if you like the first album you'll likely love this album, if you don't have the first, buy both.

A. Huntz
4.0 out of 5 stars Good Buy
Reviewed in the United States on July 4, 2015
Verified Purchase
samples reflect what you get. i prefer heavier and or faster metal type stuff, but will listen to other venues as the mood strikes (rock, pop, funk, bluegrass). i enjoy this album because it keeps a fairly steady upbeat pace, has decent musicship, presents clean vocals and has some catchy sections. its a better album than their first effort. samples reflect what you get. overall glad i came across this album and added it to my playlist.
Read more
Helpful
Comment Report abuse

bucknut2?
5.0 out of 5 stars Found Treasure
Reviewed in the United States on October 13, 2015
Verified Purchase
Solid rock album. The vocalist's blend well together. I had not really heard of Amanda Somerville until I listened to this. She has a great voice and it fits well with to more mello songs as well as the heavier ones. Will be looking to listen to more of her work.
Read more
Helpful
Comment Report abuse
See all reviews

John
4.0 out of 5 stars A worthy follow up with a great symphonic rock sound
Reviewed in the United Kingdom on April 25, 2015
Verified Purchase
The second album by the duet project Kiske/Somerville is a worthy follow up to the successful debut. It borders on being slightly better compared to the first effort but loses some points due to some formulaic songwriting and the fact that Amanda Somerville is the leading voice in most of the choruses.

Michael Kiske (ex-Helloween, Unisonic, Place Vendome) and Amanda Somerville (Trillium, HDK, Aina) handle the vocals once again. The songwriting team has also remained the same, with Mat Sinner (Primal Fear) and Magnus Karlsson (Primal Fear, Allen/Lande) providing almost all the material, with just one song written by Sander Gommans (After Forever) and Somerville. The only line-up change is the fact that besides being the only guitar player on the album Karlsson is also in charge of the keyboards and orchestrations, while Veronika Lukesova is the new drummer.

The music follows the known hard rock bordering on melodic metal formula, with a more symphonic approach and better orchestrations. The guitar solos are more varied and elaborate, the rhythm section is very solid, while the whole band sounds tighter than before.

The vocals are varying and include trade off lead passages during the verses and harmonized choruses. Both singers sound outstanding, harmonize perfectly with each other and show off their ranges in an emotional and restrained manner. Somerville is usually the leading voice in the choruses with Kiske providing backing vocals or harmonies.

Most songs fall under the melodic hard rock category, with a couple of symphonic metal numbers and a few ballads. The tempo varies throughout the album and the majority of the material is catchy and strong. The addictive punch of the heavier opener "City Of Heroes", the catchy symphonic ballad "Walk On Water", the atmospheric rock of "Breaking Neptune", the symphonic metal of "Salvation" and the happy rocker "Last Goodbye" are the stronger moments on the album. The ballads "Ocean Of Tears" and "After the Night Is Over" are also note worthy and feature some of the most emotional vocal performances on offer.

Besides the album's strong points there are also some weaknesses, which probably make it a little difficult for City Of Heroes to top the debut album. There are some songs that while not bad sound a little generic and feature choruses that are too predictable. The fact that Somerville's voice is higher in the mix throughout most of the choruses unfortunately gets a little tiring in the long run and makes the album sound a little monotonous. Another minor drawback is the fact that some of the lyrics are a little uninspired.

If you enjoyed the debut album of Kiske/Somerville you will definitely like their sophomore effort. The majority of the songs are very well executed and feature several addictive choruses, outstanding vocal performances, well executed orchestrations and some excellent guitar solos.
Read more
5 people found this helpful
Report abuse

Dave B (Leeds, UK)
4.0 out of 5 stars Gets Off To A Great Start..
Reviewed in the United Kingdom on May 31, 2015
Verified Purchase
John’s earlier review here is near spot-on: stand-out openers City of Heroes and Walking on Water raise hopes of a real classic rock album – videos of both rightly feature on the short DVD on the Ltd Edition., along with some “making of” interview footage.
Rest of the album just doesn’t quite come to those high hopes raised at the start , lots of great guitar work and vocal passages follow but I didn’t find any tracks standing out as memorable to demand repeat plays . The DVD shows Veronika Lukesova has the makings of one hell of a rock drummer, but the later tracks somehow just don’t give her enough to really get het sticks into. Also at around 75 minutes this is long album , maybe one where “less could have been more”

If some lyrics seem a little uninspired that maybe part down to Amanda’s very limited input to their writing - try her own strong songs on her own Trillium ”Alloy” album you will hear the difference clear enough...
Read more
One person found this helpful
Report abuse

BD Muratori
3.0 out of 5 stars A very good album - just not as good as its predecessor.
Reviewed in the United Kingdom on October 5, 2015
Verified Purchase
This review may be a little harsh and perhaps I should have given it four stars. The problem is I cannot stop myself from comparing it to the previous album they brought out. That album was very fresh and had great voices and beautiful singing. This album feels somehow a little tired to me. Maybe it is just the feeling that it has been done before but I thought it was more commercially oriented than the previous album. The voices are still great and, in comparison to other duet albums out there, it probably deserves four stars. I still give it three because it is quiet far away from their first release.
Read more
Report abuse

heidigrint76
5.0 out of 5 stars Love this album
Reviewed in the United Kingdom on September 8, 2017
Verified Purchase
Love this album. you cant go wrong with Kiske. Love all his work and this album with Somerville is wonderful. I could listen all day to his voice. it came really quick and was new so in great condition. DVD is interesting and funny.
Read more
Report abuse

Adrian Wheeler
4.0 out of 5 stars City of Heroes Review
Reviewed in the United Kingdom on June 2, 2015
Verified Purchase
This was purchased as a gift and stylistically is not really my thing so I can't comment on the music too much but it did arrive within the advertised time slot and was (bonus tracks, etc) exactly as described
Read more
Report abuse
See all reviews