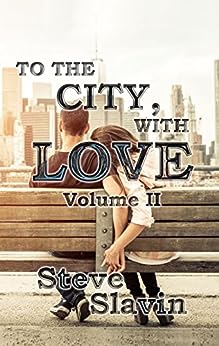 To The City, With Love: Volume II Kindle Edition

Ted Krever
5.0 out of 5 stars YET ANOTHER GREAT BOOK ON NYC - PART OF A FANTASTIC SERIES!
Reviewed in the United States on May 22, 2021
Verified Purchase
You're going to see this review on the other TO THE CITY WITH LOVE books - purchased all three - what a remarkable series!!!! Slavin documents the moments where history happens and the city changes. He reveals the NY that so many have attempted to capture in movies, documentaries, TV shows, books.... Yet the way he spins his wonderful stories it is as if you are suddenly walking through the city streets like you were born here. No holds barred - TO THE CITY WITH LOVE series is the REAL New York City.
Read more
Helpful
Report abuse

Jacqueline Seewald
5.0 out of 5 stars Original, Clever, Well-written Stories
Reviewed in the United States on January 15, 2018
In the second volume of this large collection of short stories, most of which have been previously published in literary magazines, Dr. Slavin divides the stories, all relating to the singles scene, into thematic groups: Part I Party Animals, Part II Sex in the City, Part III Noodleman’s New York, and Part IV Love in the City.

New York is the city and the time period is the 1960’s through the 1980’s. In Part I, we meet Uncle Ben, an older man who lives in relative poverty and is still looking for women he can hustle. In “The King of the Party Circuit” Marvin is another older single man; however, he still lives at home with his mother. He keeps track of where the parties are held on weekends and not only goes to them but informs others where they will be. His existence is comfortable from his point of view. These two stories are essentially narratives of pathetic men but written in a humorous way. “The Broken Man” is also humorous with a clever ironic twist. “Mensa” offers an entertaining take on the party scene that is quite original.

In Part II, Sex and the City, we meet women like Joanna, the very good girl, while on the other end of the spectrum we have bed and breakfast Betty who explains how men must pass “The Dinner Test” if they want to sleep with her. “Dear Abby”, presenting views of the sexual revolution, is simply hilarious. “The V.D. Clinic” is also very funny. The stories in this group are both raunchy and amusing although the humor can be sarcastic and biting at times.

Stanley Noodleman is another of the older single men who lives at home with his mother and he works in the post office in an unsatisfying job. The party scene means everything to him. He has little else of meaning in his life. The author instills his situation with humor as well as pathos.

There are also two stories written in play format in this book which are quite interesting. I particularly liked “The Phone Call.”

The final group of stories, entitled “Love in the City,” is gentler in nature. Some of these stories have a romantic sensibility. Altogether the collection gives us a sense of the great variety of people that live in New York City.

The singles scene is presented in a way that would do justice to a Seinfeld episode. Slavin’s sense of humor is sharp, his intellect keen and observant. Sometimes there is a cynical edge to the stories, other times they drip sarcasm, but they are always clever and entertaining, as well as uniquely original. The stories are a perfect tribute to a great city.
Read more
Helpful
Report abuse

sueannherself
5.0 out of 5 stars Charming, whimsical, readable
Reviewed in the United States on February 2, 2018
Having previously read To The City With Love (I don't recall any "Volume One" on the cover, giving us the impression it was all he had) I was delighted to find more short stories in the same delightful prose. This was very impressive, as Dr. Slavin has been known for writing math and statistics textbooks -- not usually what one considers "page turners." But his dialogue is so reminiscent of City Dwellers that a reader can clearly hear a Brooklyn accent leap from the page, or the occasional condescension of the Upper East Siders' rhythm. The stories themselves were rarely interconnected, allowing the reader to consume one at a time; however, I found myself saying, "Just one more!" and starting a new story. I commend Steve Slavin on his latest effort, and, like the stories in Volumes One and Two, I look forward to his next. Good reading!
Read more
Helpful
Report abuse

Michael Stringer
5.0 out of 5 stars Steamy and Funny in the Big Apple '70s
Reviewed in the United States on January 18, 2018
Humorous and outrageous and sometimes erotic stories of colorful people in New York, mostly around the crazy and wildly promiscuous days of the '70s. You'll smile, laugh, and you might even shed some tears, but you'll always be entertained. Author Steve Slavin follows up his debut Volume 1 with short stories that are a bit steamier than his first volume, but no less amusing. Great read, especially for those who lived in NYC during that decade.
Read more
Helpful
Report abuse

Michael S
5.0 out of 5 stars Like Volume 1, but funnier!
Reviewed in the United States on July 1, 2018
Like Volume I, an assortment of stories, some of them made up, where New York City is always the essential ingredient. Always funny, it's a little tricky discerning which stories are true or charming BS.
Read more
Helpful
Report abuse