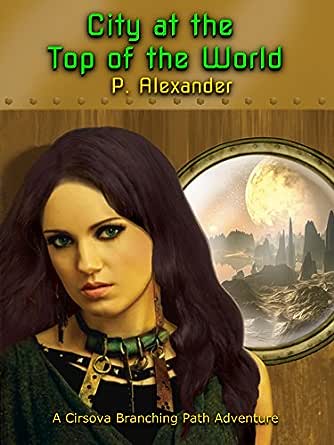 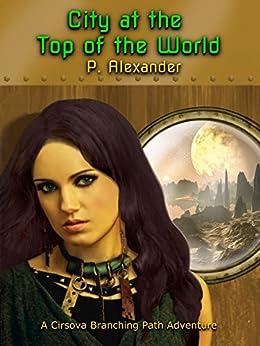 City at the Top of the World: A Cirsova Branching Path Adventure Kindle Edition

Our protagonist is Aeryn, a girl from a desert tribe given as one of the regular tributes to a race of powerful but decadent beings who occupy the titular mountaintop city. The tale opens in her journey via airship, and she (and the reader) is immediately presented with options to explore, to fight and try to escape, or to meekly accede to her captor's commands. Each choice presents a link, and a path to either further choices, or an abrupt end.

The worldbuilding was a major interest for me, as was the history and nature of this strange city and its terrifying masters, all revealed gradually during the tale. In short, they've tapped into the power of dreams and can make dreams manifest, but what do they have to dream of?

There are numerous endings, but only two that could be described as 'good', one semi-good and one optimal ending, and which one you get depends on your choices. If Aeryn runs off half-cocked and does something foolish, the results are likely to be fatal, so too if she plays it too safe. The optimal good ending is appropriate, natural and satisfying, making me think this novel began as a short story before the author decided to take the branching paths route.

Hurrah for the return of an art form in the digital age!

Kull Mak Morn
5.0 out of 5 stars ... after checking out the author's blog and I am glad I did
Reviewed in the United States on February 24, 2016
I bought this book on a whim after checking out the author's blog and I am glad I did. I grew up with TSR Endless Quest and Fighting Fantasy game books and I imagined it was going to be a more mature version of that sort of experience. It sort of was, but it ended up being a lot more. The high quality prose lifts it up into another sort of experience that I am having a problem explaining. Suffice it to say that when it was over I was moved in a way I didn't expect. One of the biggest successes of the book is the fact that the world felt real but at no time was I bogged down in exposition. I don't know if the world is going to feature in more fiction or if it might become an RPG supplement but I will take either, both preferably.
Read more
Helpful
Comment Report abuse
See all reviews