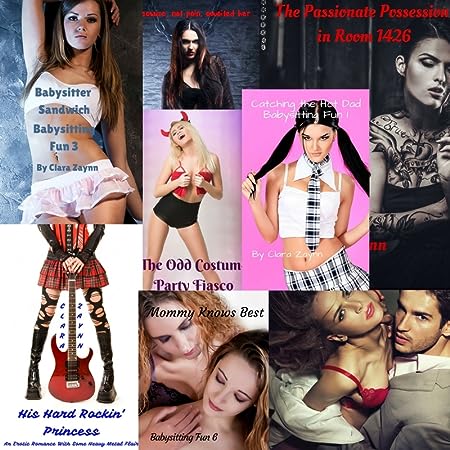 Help us improve our Author Pages by updating your bibliography and submitting a new or current image and biography.
Learn more at Author Central
1 11 1
Previous page
Next page
Titles By Clara Zaynn
All Formats Kindle Edition Paperback Sort by:Popularity 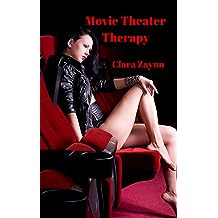 Sometimes it takes a stranger to make you feel best about yourself.

Jenna spent the last six months working hard to drop the baby weight her second child left her with. She feels great about herself until her husband makes an offhand joke about her appearance while on a date night at the local movie theater. It guts her, and she needs to leave in the middle of the movie to be alone for a few minutes. As luck has it, one of the employees, a hot young stud, not only asks if she’s okay, but gives her major compliments on her looks. When she asks him to prove it, he takes her up to an empty restroom, locks the door, and gives her some of the best therapy any woman could want. Will her husband notice her new found confidence, or will she stay with her young hunk of a stud?

Due to graphic sexual content, no one under the age of 18 should read this story. You’ve been warned. 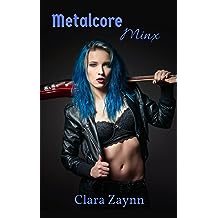 Sadie Finch, known as the Mistress of Death while on stage with her band, Gallows at Dawn, might be one of the premier lead singers on the metal scene, but it doesn’t mean she doesn’t miss her husband and the sex while out on the road. She can’t even go full rock star and get wasted each night because she doesn’t want to ruin her voice. This certainly isn’t how teenage her saw how being a rock star would be like. Especially when her husband accidentally sends a sex tape of him cheating.

When Gallows at Dawn heads out for tour with the hard rock band Wicked Man’s Blues supporting them, Sadie falls hard for the lead guitar player, Ignacio “Nasty” Reyes, and he for her. Their mutual respect and friendship soon turns physical, and both are as happy as could be, with her not even dwelling much on her divorce. It’s not until she suspects Nasty has someone waiting for him at home that Sadie’s world again gets flipped on its head. What’s worse, Nasty won’t admit he’s cheating, but after her divorce from Owen, she refuses to believe him.

Is it all too late for Nasty to explain his situation and past to Sadie? When Owen makes a dangerous and violent appearance on the tour, it very well could be…

There are plenty of hot-and-heavy (read: very descriptive) sex scenes contained in the story, so no one under the age of 18 should read. This is your “Explicit” warning.
Read more
Other Formats: Paperback 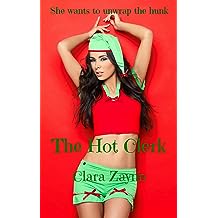 Sometimes it's not Santa who brings the best gifts...

Kaitlyn never imagined a simple chore at work would lead her to meet the man of her dreams. She lusted after Zach with a single glance, but somehow, thanks to the magic of the holiday, it turned into so much more.

Due to graphic sexual content, no one under the age of 18 should read this story. You’ve been warned. 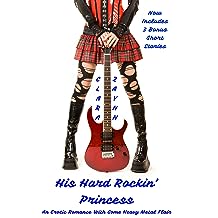 19-year-old bratty with a side of bitch Elle Sullivan isn’t looking for love. She had a boyfriend in high school and it nearly ruined the last few months of senior year. But when her eyes lock with that hot older guy at HeavyMetalFest, she can’t control her heart. Or her lust. He brings things out of her that she never knew existed. Like when she calls him Daddy and demands he spank her. Where in the heck did that come from? But, holy goodness, it’s so hot! Too bad she can tell he hates it. Will that kill the love they’ve built? Or are they destined for more?

Tim “Moth Man” Wade, former lead shredder for the heavy metal band Splitting Braincells and current owner of Moth Man Shred School, never expected to find love at a heavy metal festival, and especially not with a girl a decade younger. But when their eyes meet across the festival campground, he’s hooked. Even if she calls him Daddy and wants him to spank her, something he can’t stand, the sex is so good that he can overlook it. He hopes. He’ll have to if he wants her to be his hard rockin’ princess. 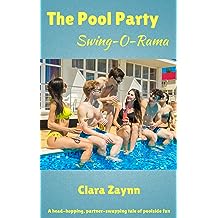 Three young married couples decide they’re ready to spice up their marriages. What better place to have some extra-marital fun than a pool party, where everyone is already dressed in skimpy bikinis and swim trunks? Megan and Josh are gym rats who take pride in their hard bodies; Felicity gets excited by bossing her husband, Christian, around in the bedroom; Tony is a dominant to his demure wife, Emma. How much fun will these six have together in and around the water?

This steamy 15,500-word short story is great for anyone who likes to see groups having a sexy time together! 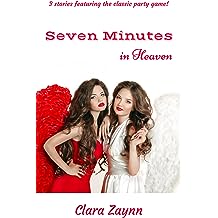 Here are three short stories following a game of Spin the Bottle with a Seven Minutes in Heaven game thrown in. At this frat party, when the bottle stops on someone, they can choose whether to give someone a kiss, or drag them into the garden shed for seven minutes of pure, uninterrupted fun! Three people choose that option, and it doesn’t just change their night, but in each instance, it might lead to much more after the party. These three short stories show that rushed sex is sometimes the best!

If you enjoy party games and quickies, this collection of three shorts, totaling approximately 8000 words, is for you! 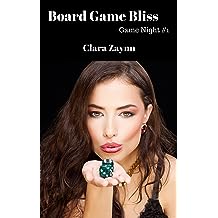 David and Samantha have been best friends their whole lives, but he’s never told her he wishes they could be more. This week’s Game Night, though, might prove to be a bit more interesting. Not only has Sam put in much more effort than ever before, but her boyfriend is nowhere to be seen. David isn’t sure what’s going on, but when he makes a quip about her boyfriend not being around for all this effort, she breaks down and calls him clueless. When he goes in to comfort her, he finds she’s been harboring the same romantic thoughts as him for years. Now they’re both holding the same cards, and they won’t be playing a board game tonight.

This 5,000 word short story is for anyone who enjoys games, romance, and bedroom fun! 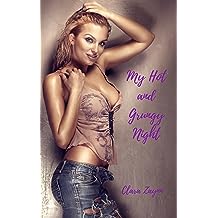 She lived a wild night 25 years prior, one she still remembers fondly. It was a time of the grunge music gods, and while this band didn’t live up to that status on stage, she found them to be so much better in the dressing room backstage. Though it was a short encounter, it was all she could handle, as they pleased her in ways she never thought possible. No, it wasn’t a night she could tell her grandkids about, but not every story is meant to be shared. This one has kept her fueled!

This 4,500 word short story has music, a bit of lesbian action, and a fun bout of group play to make most everyone happy! 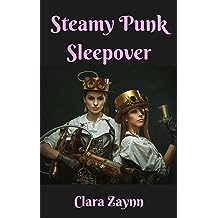 She thought she was simply out to drink some beer while checking out her new cards.

When the new series for her favorite steampunk-based collectible card game come out, Ashleigh figures her weekend will consist of nothing more than figuring out how to tweak her decks with the booster packs. After she dodges a couple of guys she has no interest in, though, she’s surprised when a sexy young woman captures her attention. She’s never been attracted to other women, after all. She soon learns that this girl, Monique, is her perfect partner. Not only is she gorgeous and easy to get along with, but she wants to learn how to play GEARSQuest and get into the steampunk culture. Ashleigh is all for that! Monique doesn’t simply prove to be a new best friend, though, but a hot lover. Ashleigh has never been more satisfied. Will Monique become Ashleigh’s “one” for life? 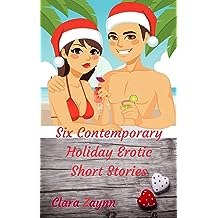 These stories have already been published on their own, but you can get all six in one handy book at a bargain price!

We celebrate Valentine’s Day with a girl who vows not to fall in love; a Halloween-themed frat-party in June where an innocent girl loses her virginity and soon after finds her true love; 4th of July at the beach where a young woman who thinks a sex tape ruined her life finds the one for her; a Halloween dungeon where pleasure is the word of the day, not horror; a young woman who reconnects with an old flame before her Thanksgiving feast; and a toy-store clerk who finds the true meaning of Christmas in the arms of a handsome hunk.

WARNING: Due to graphic sexual content, no one under the age of 18 should read the stories in this collection. 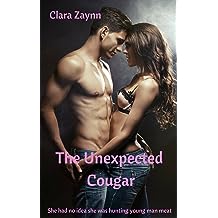 A young lover shows her just how far apart she and her husband have drifted.

Katie knows the passion has drained from her marriage. Ricky is more interested in drinking beer and watching the ball game on TV than her. When she goes to a book signing at a local independent book store, she meets a young (20 years her junior!) man who gets her to realize she doesn't need to put up with a loveless marriage. They hit it off right away, and after they get their books signed, steal away to a sleazy motel for a few hours of extramarital fun. And maybe more. She hadn’t planned to become a cougar, but it worked out for her! 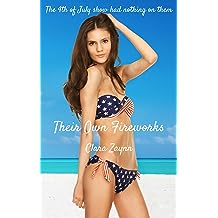 She had no idea how she would ever get over an unwanted sex tape.

Recent high school graduate Billie Samms thought she’d have no way to get away from the sex tape her boyfriend made of her losing her virginity. Her parents decided to whisk the family away to a beach house for the 4th of July holiday, far away from the controversy. On her first day there, she meets Henry, who she thinks is the guy of her dreams, but when he makes a sex tape joke, she knows she can’t get away from it.

Can Billie find her way away from the sex tape? Did Henry really see her tape, or was it simply an unfortunate and ill-timed joke? And will they get to create their own fireworks during the holiday celebration?