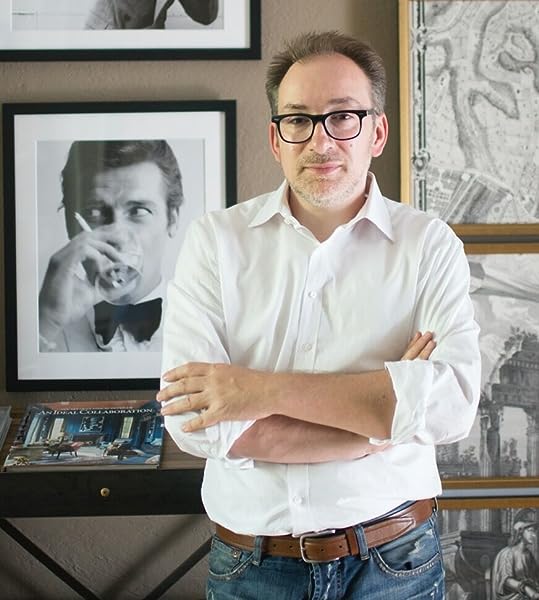 by Phillip James Dodd (Introduction)
4.5 out of 5 stars 15 ratings
See all formats and editions
Sorry, there was a problem loading this page. Try again.

•Features an insightful introductory essay by Phillip James Dodd, an internationally renowned expert in the fields of Classical architecture and design
•Includes dozens of exemplary architectural projects, rich in photographic detail and architectural analysis
•Provides a modern take on traditional Classical design themes, with indepth profiles of exterior and interior works, including detailing, use of materials, landscapes and regional variations
•Investigates the contemporary works of many eminent Classicists, and highlights their unique methodologies and innovative designs

This latest compilation volume for The Images Publishing Group reveals an enticing glimpse into the exquisite architectural works of innovative and skilled contemporary classicists. While remaining loyal to traditional classical design, the architectural projects featured within display a remarkable talent for versatility and adaptability within the fundamental classical language of architecture. This richly photographed book masterfully presents a number of preeminent classicists, who offer unique insight into their interpretation of the theory of classical design in their works. This compilation also highlights the collaboration between the architects' application of excellent detailing, the use of fine material, and exceptional craftsmanship, and how, all the while, they are creating a refined and seamless fusion with the surrounding landscape and environment.
Read more
Previous page
Next page

Full of beautiful photography, this volume showcases some of America's greatest residences designed in the classical style. (Town & Country UK)

A fascinating journey through American houses stretched for 350 pages, and the most pleasant thing about this is that during it you will have time to visit both the classic mountain house and the New York townhouse on Fifth Avenue. (Architectural Digest Russia)

The gorgeous tome encompasses everything everything from new-builds and renovations to urban abodes and rural retreats. (Atlanta Homes & Lifestyles)

Introduction written by Phillip James Dodd. A native of Manchester, England, Phillip attended the prestigious Prince of Wales' Institute of Architecture in London where he was taught by many of the architects featured in this book. He received a Degree in Architecture from his hometown university, before moving to America, where he gained a Masters in Architecture from the University of Notre Dame. After training with some of the most recognised residential architectural firms in America, Phillip started his own design firm Phillip James Dodd: Bespoke Residential Design. With a reputation as one of the foremost experts on Classical architecture and interiors, Phillip is fast becoming one of the most sought-after young residential designers practicing today. His designs can be found in Manhattan, Greenwich, and Palm Beach ranging from an 800-square-foot (74-square-meter) pied-à-terre to a 20,000-square-foot (1,858-square-meter) waterfront estate property.He is also a Fellow Emeritus at the Institute of Classical Architecture (ICA), and Classical America (CA), where from 2006 to 2009 he served as the jury coordinator for the annual Arthur Ross Awards. Phillip has taught Classical design at the ICA & CA and at Notre Dame, and has been a guest critic for the Interiors Departments at Parson's School of Design and the Fashion Institute of Technology.
Tell the Publisher!
I'd like to read this book on Kindle

David ArbogastTop Contributor: Architecture
4.0 out of 5 stars A fine sampler of contemporary Traditional American residential architecture
Reviewed in the United States on December 26, 2018
Verified Purchase
The title of the book is somewhat misleading. It is not about Classical houses in America which, strictly defined, might be limited to Georgian and Federal style houses or even Greek Revival style houses or it might be limited to the Neo-Classical and Beaux Arts style houses of the late-nineteenth and early-twentieth centuries or it even might limited to the New Classical residential architecture of the late twentieth century to the present. What we have in this book is a gathering of works by various architects and their firms in a range of styles which includes Classical, Cotswold, Post-modern, and Neo-traditional.

Each firm presents a small representation of their work with a brief philosophical statement of their chief designer followed by gorgeous color photographs of their houses. Unfortunately, floor plans, not to mention elevations and sections or other drawings are missing, which is a serious drawback in my view, As a result, I give this book four stars instead of five.
Read more
4 people found this helpful
Helpful
Report abuse

jhunter
5.0 out of 5 stars great book at a great price !
Reviewed in the United States on July 10, 2020
Verified Purchase
wonderful book - a must have for my library - poor job in shipping arrived damaged but considering the price i can not complain
Read more
Helpful
Report abuse

Paula
3.0 out of 5 stars Beautifully photographed high dollar gorgeous homes
Reviewed in the United States on November 6, 2017
Verified Purchase
Beautifully photographed high dollar gorgeous homes. Nice quality. And some prestigious architects/designers. BIG disappointment - with the exception of one apartment, there are NO floorplans. There are thumbnails of each home's front elevations (along with photographs of these elevations) but no floorplans.
Read more
10 people found this helpful
Helpful
Report abuse
See all reviews