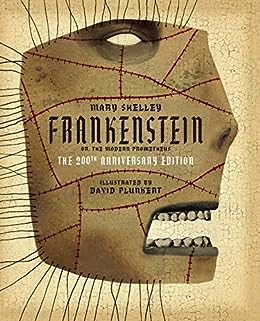 by Mary Shelley (Author), David Plunkert (Illustrator) Format: Kindle Edition
See all formats and editions
Sorry, there was a problem loading this page. Try again.
With detailed and evocative imagery, renowned artist David Plunkert takes readers on a dark journey into the greatest novel in the monster genre, Frankenstein.

The suspense and horror of Dr. Frankenstein reanimating assembled body parts, the monster spying on an unknowing family, and the creature's revenge on his maker take on a whole new meaning when accompanied by Plunkert's mystical, layered interpretations.

The Classics Reimagined series is a library of stunning collector's editions of unabridged classic novels illustrated by contemporary artists from around the world. Each artist offers his or her own unique, visual interpretation of the most well-loved, widely read, and avidly collected literature from renowned authors. From Alice's Adventures in Wonderland to The Adventures of Sherlock Holmes and from Jane Austen to Edgar Allan Poe, collect every beautiful volume.
Read more
Previous page
Next page
Due to its large file size, this book may take longer to download

Mary Wollstonecraft Shelley (30 August 1797 - 1 February 1851) was an English romantic/gothic novelist and the author of Frankenstein, or The Modern Prometheus. She was married to the Romantic poet Percy Bysshe Shelley.Mary Shelley was born Mary Wollstonecraft Godwin in Somers Town, in London, in 1797. She was the second daughter of famed feminist, philosopher, educator, and writer Mary Wollstonecraft. Her father was the equally famous anarchist philosopher, novelist, journalist, and atheist dissenter William Godwin. Her mother died of puerperal fever ten days after Mary was born.

David Plunkert is a principal, art director, designer, and illustrator at Spur Design in Baltimore, Maryland. The firm designs posters, covers, logos, brochures, and websites for publishers and corporations. His illustrations have appeared in Newsweek, The New York Times, Wall Street Journal, and LA Weekly, among many others. His steampunkish illustration and collage style give his characters a spooky, surrealistic quality.

"This evocative new hardcover volume is blessed with a series of unsettling illustrations by acclaimed artist David Plunkert that punctuate the famous monster tale with refreshing originality."―Jeff Spry, SYFYWIRE

"With detailed and evocative imagery, renowned artist David Plunkert takes readers on a dark journey into the greatest novel in the monster genre."―John Squires, Bloody Disgusting --This text refers to an out of print or unavailable edition of this title.

Janet
5.0 out of 5 stars Fabulous illustrations, not to be missed
Reviewed in the United States 🇺🇸 on April 11, 2020
Verified Purchase
A good size hardcover book with superb illustrations by David Plunkert. I bought this book because I love Plunkert's art, and had already bought his Poe book. I was thrilled when I got this and saw that there are so many full-page, full-color illustrations, and also many smaller ones used as borders and such. Bravo!!!!!
Read more
Helpful
Report abuse

mattdross
3.0 out of 5 stars Classic Book that Deserves a Better Publication
Reviewed in the United States 🇺🇸 on November 1, 2019
Verified Purchase
Frankenstein is an excellent classic novel that everyone should read. The novel earns a 5 star rating. However, the Classics Reimagined series is not the best format for this novel. I wanted a hardbound version of the novel, and this may be the best option for the price, but the quality is lackluster. There were several typos in the text (normally these typos were two words that lacked a space between them) and the quality of the covers was poor. I would definitely prefer a more durable cover with a dust jacket rather than an imprinted cover that seems to bend easily at the corners.
Read more
3 people found this helpful
Helpful
Report abuse

Tori
5.0 out of 5 stars Very Happy to Add this to my Collection
Reviewed in the United States 🇺🇸 on January 26, 2020
Verified Purchase
Arrived on time and in great condition. I'm excited to add this beautiful book to my Frankenstein collection. The art is really something, whether or not you've read Frankenstein before, this is a cool experience.
Read more
Helpful
Report abuse

Paul E Thompson
5.0 out of 5 stars This is the edition to read and re-read!
Reviewed in the United States 🇺🇸 on February 20, 2020
Verified Purchase
Beautifully rendered and re-designed edition of a horror classic! Clever and illuminating illustrations that hauntingly complement Shelley’s text.
Read more
Helpful
Report abuse

Angela
5.0 out of 5 stars Beautiful book!
Reviewed in the United States 🇺🇸 on July 29, 2019
Verified Purchase
Absolutely beautiful book!!!!
Bought for my sister as a gift. It has gorgeous colored illustrations! I cannot day enough about how impressed we were with it.

Brendan
5.0 out of 5 stars Must For Frankenstein Fans
Reviewed in the United States 🇺🇸 on January 18, 2018
Verified Purchase
What a great addition to Frankenstein fans. The illustrations are great and honestly for the price, I'm still surprised it was only like $18. Very high quality and a must 200th anniversary edition.
Read more
Helpful
Report abuse
See all reviews

Chester
4.0 out of 5 stars Beautiful edition
Reviewed in the United Kingdom 🇬🇧 on January 1, 2021
Verified Purchase
Classic story beautifully illustrated and printed. I gave this to my sister-in-law as a gift and she loved it. A literary masterpiece, of course. And a lovely edition.
Read more
Report abuse