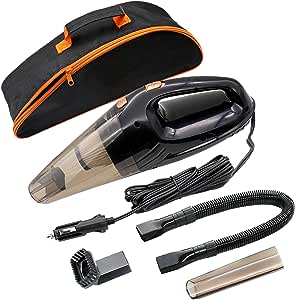 Brand: ANTEQI
3.1 out of 5 stars 90 ratings
| 8 answered questions
Currently unavailable.
We don't know when or if this item will be back in stock.


Product Features:
1. The automotive cleaning vacuum is bullet train design, elegant appearance, compact and flexible, easy to carry.
2. Super power, strong suction, dust effect is remarkable.
3. Unique and large duck-billed suction nozzle design can clean the corner cracks thoroughly.
4. It is better that it has unique and ultra-fine filter net.
5. The operating specification is wider with 14.7 FEET long power cord. you can clean everywhere in you car.
6. Super mute design, use more comfortable.

3.1 out of 5 stars
3.1 out of 5
90 global ratings
How are ratings calculated?
To calculate the overall star rating and percentage breakdown by star, we don’t use a simple average. Instead, our system considers things like how recent a review is and if the reviewer bought the item on Amazon. It also analyzes reviews to verify trustworthiness.

K. Machuga
4.0 out of 5 stars that would be great. " Sure
Reviewed in the United States on September 17, 2016
Verified Purchase
So it's 3pm on a work day and your diligently filling out your TPS reports when your boss, Bill Lumbergh comes over says "Yeah, so my car is done earlier than I thought, so if you could just give me a ride to the Porsche dealer..... that would be great." Sure, you say... like you have a choice. And then you realize you haven't cleaned your car in a month. PANIC!

That's the scenario this little vacuum is designed for.

I was a little nervous due to some of the reviews about how poorly it performed. But I think if your expectations are appropriately set (and assuming those people didn't end up with faulty units), you will be satisfied.

Ironically, I found myself in a situation like I described not one day after I purchased this unit. A female friend of mine (who keeps her home and car quite tidy) was going on touring bike event the following morning, and just realized the bike mount she bought for her compact car wouldn't fit. She wanted to borrow mine.

I had just cleaned my car about a week ago, but enough crap had accumulated in that time from my own bike being in there that I would have been embarrassed loaning it out it that condition. I broke out this baby out, and it did a solid job getting all the little bits a pieces that made it look messy. No, it's not going to suck up loose change, pens, or probably even peanuts (although to my surprise, it did suck up a liquid ibuprofen tablet that looked heavier than a peanut). I am not worried about something that I can pick up and in 1 second anyway. But it quickly restored the car to the condition it was when I dragged out my home vacuum cleaner, attachments, and extension cord about a week ago.

I used a few of the attachments- I did not use the long one designed to get in between the seats, but the vacuum itself and the brush attachment worked well. The only question now is how long will it last. But so far, I am happy with it.

Shawn
4.0 out of 5 stars Shop vac, not as portable, but definitely more stronger suction
Reviewed in the United States on July 19, 2019
Verified Purchase
The suction power of this vacuum in my opinion is super weak and you have to go over heavy traffic areas numerous times for it to really be clean. I really would much rather pay the quarters for one of those vacuums at a car wash that has really good suction and will give ur cars carpet a really good clean. Plus u have to empty it about 3 or 4 times just doing the inside of my car because once dirt and dust clog up the air flow the suction gets super super weak and almost doesn't pick up anything.
Read more
Helpful
Comment Report abuse

LJMom
5.0 out of 5 stars Works great! Just what I wanted.
Reviewed in the United States on August 21, 2017
Verified Purchase
So far so good, it has worked just as intended. My minivan gets very dirty from boys' cleats and grass and crumbs even though we try to be careful. This works great for quick cleanups. I have rubber mats and this helps the van stay looking nice! It comes with a bag and though it is a tight fit, does fit in the bag for easy storage. The different attachments like the hose and brush have come in handy with my textured floormats.
Read more
One person found this helpful
Helpful
Comment Report abuse

Sally Cypress
5.0 out of 5 stars Life saver for those messy babies!
Reviewed in the United States on January 7, 2017
Verified Purchase
As a new mother, I found this handheld car vacuum cleaner a life saver for those messy babies. I usually clean the inside of my car when I go for a carwash, but with a newborn who throws things around, drools constantly, and spits up/puke sometimes, it's so helpful to have a compact vacuum cleaner with you all the time. The cord is long enough to reach the back of my big SUV. The suction isn't power enough to pick up heavy objects, which is great, because you don't want small toys to be caught in there. But for everything else, it was extremely useful to pick them up.
Read more
3 people found this helpful
Helpful
Comment Report abuse

dave
5.0 out of 5 stars Good product - excellent product service.
Reviewed in the United States on January 9, 2018
Verified Purchase
This vacuum does exactly what it advertises - does a very good job of vacuuming my car interior in a compact, easy to use unit. It arrived with a broken plastic nozzle, but after contacting the seller, they immediately shipped out a new part to me, no further questions asked. Got to be happy with product support like that!
Read more
One person found this helpful
Helpful
Comment Report abuse

George from Colorado
5.0 out of 5 stars it is a real nice hand held vacuum
Reviewed in the United States on February 5, 2017
Verified Purchase
Used this for the first time last week, it is a real nice hand held vacuum. It vacuums hair, crumbs, and dirt off the carpet in my pick up real well.w It doesn't pick up big pieces of debris, but they can be picked up by hand. It was a coupe attachments that are useful to reach hard to get to places and a brush to do a good job on the carpet. The suction is adequate and I'm happy with it, hope it lasts a long time.
Read more
Helpful
Comment Report abuse

Faith E. Morrison
1.0 out of 5 stars I am really very disappointed with this product
Reviewed in the United States on March 6, 2017
Verified Purchase
I am really very disappointed with this product. It has zero suction. I don't know why it gets such great reviews. I would send it back only I left it too late. The one star is a) because I have to give it one or not rate it and because the handy carry case is a good idea.
Read more
2 people found this helpful
Helpful
Comment Report abuse
See all reviews
Pages with related products. See and discover other items: car start stop engine, push to start accessories